A Travel Price Comparison for United States of America Columbus vs. Charleston for Vacations, Tours, and Honeymoons

Should you visit Columbus or Charleston?

Should I visit Columbus or Charleston? This is a common question asked by many travelers. By figuring out which city has activities that align with your interests along with knowing which is more affordable, you'll understand where you can get more bang for your buck. So, let's dive into the details and the data, which all comes from actual travelers.

Where Should I go: Columbus or Charleston?

Charleston is a beautiful, southern city and seaport town in South Carolina. It has a wonderful, historic downtown area that the city government works hard to maintain. Located on a peninsula that is created by two rivers, the city is a stunning setting with much character. It is a popular place to visit for its culture, architecture and cuisine. In recent years Charleston has gained popularity and it continues to grow as both a regional and international travel destination. With its rising popularity comes increasing costs. Travel costs continue to go up as restaurants and hotels raise their prices, particularly during the peak travel season and holiday periods.

Which city is cheaper, Charleston or Columbus?

The average daily cost (per person) in Columbus is $126, while the average daily cost in Charleston is $136. These costs include accommodation (assuming double occupancy, so the traveler is sharing the room), food, transportation, and entertainment. While every person is different, these costs are an average of past travelers in each city. What follows is a categorical breakdown of travel costs for Columbus and Charleston in more detail.

Compare Hotels in Columbus and Charleston

Looking for a hotel in Columbus or Charleston? Prices vary by location, date, season, and the level of luxury. See below for options and compare which is best for your budget and travel style.

Hired Cars and Shuttles in Charleston

Some specific examples of transportation prices in Charleston:

Is it cheaper to fly into Columbus or Charleston?

Prices for flights to both Charleston and Columbus change regularly based on dates and travel demand. We suggest you find the best prices for your next trip on Kayak, because you can compare the cost of flights across multiple airlines for your prefered dates.

Some typical examples of dining costs in Charleston are as follows:

Also, here are some specific examples of food and dining related activities in Charleston.

Some typical examples of activities, tours, and entrance ticket prices in Charleston are as follows:

Tours and Activities in Charleston

Some specific costs of activities, tours, and entrance tickets for Charleston are as follows:

Sample the Local Flavors in Charleston

Here are a few nightlife and alcohol tours and activities from local tour providers in Charleston:

When comparing the travel costs between Columbus and Charleston, we can see that Charleston is more expensive. However, the two cities are actually relatively comparable in price, as the difference is somewhat minimal. Generally, this means that you could travel with generally the same travel style and level of luxury in each place. Since both cities are in North America, it's no surprise that their costs are relatively close, as many destinations here have somewhat similar travel prices overall.


When is the best time to visit Columbus or Charleston?

Should I visit Columbus or Charleston in the Summer?

The summer brings many poeple to Columbus as well as Charleston. Also, many visitors come to Charleston in the summer for the beaches, the music scene, and the family-friendly experiences.

In July, Columbus is generally around the same temperature as Charleston. Temperatures in Columbus average around 77°F (25°C), and Charleston stays around 82°F (28°C).

Should I visit Columbus or Charleston in the Autumn?

Both Charleston and Columbus are popular destinations to visit in the autumn with plenty of activities. Also, most visitors come to Charleston for the shopping scene, the music scene, and the natural beauty of the area during these months.

Columbus is cooler than Charleston in the autumn. The temperature in Columbus is usually 57°F (14°C) in October, and Charleston stays around 67°F (19°C).

Columbus usually receives less sunshine than Charleston during autumn. Columbus gets 179 hours of sunny skies, while Charleston receives 197 hours of full sun in the autumn.

In October, Columbus usually receives less rain than Charleston. Columbus gets 2.2 inches (55 mm) of rain, while Charleston receives 2.9 inches (74 mm) of rain each month for the autumn.

Should I visit Columbus or Charleston in the Winter?

Both Charleston and Columbus during the winter are popular places to visit. Furthermore, the winter months attract visitors to Charleston because of the museums, the Christmas ambience, the shopping scene, and the cuisine.

Columbus can be very cold during winter. In the winter, Columbus is much colder than Charleston. Typically, the winter temperatures in Columbus in January are around 30°F (-1°C), and Charleston is about 47°F (9°C).

In the winter, Columbus often gets less sunshine than Charleston. Columbus gets 105 hours of sunny skies this time of year, while Charleston receives 188 hours of full sun.

Columbus usually gets less rain in January than Charleston. Columbus gets 2.2 inches (56 mm) of rain, while Charleston receives 3.3 inches (85 mm) of rain this time of the year.

Should I visit Columbus or Charleston in the Spring?

The spring attracts plenty of travelers to both Columbus and Charleston. Furthermore, the beaches and the natural beauty are the main draw to Charleston this time of year.

In April, Columbus is generally cooler than Charleston. Temperatures in Columbus average around 54°F (12°C), and Charleston stays around 64°F (18°C).

People are often attracted to the plentiful sunshine in Charleston this time of the year. Columbus usually receives less sunshine than Charleston during spring. Columbus gets 200 hours of sunny skies, while Charleston receives 275 hours of full sun in the spring.

In April, Columbus usually receives more rain than Charleston. Columbus gets 3.2 inches (81 mm) of rain, while Charleston receives 2.7 inches (69 mm) of rain each month for the spring.

Typical Weather for Charleston and Columbus 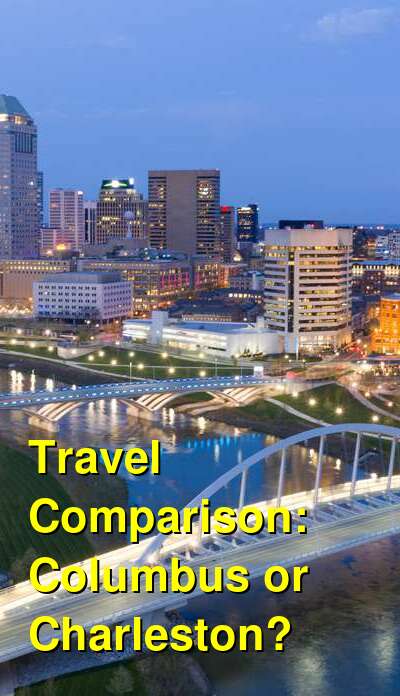