A Travel Price Comparison for Vacations, Tours, and Honeymoons Ephesus vs. Bodrum

Should you visit Ephesus or Bodrum?

If you're trying to decide where to visit between Ephesus or Bodrum, this travel cost comparison can help. The overall cost of travel is usually a consideration when deciding where to go next, and the cost comparison below can help you decide based on the average prices from other travelers along with your own travel budget.

Bodrum is a city on the Bodrum Peninsula, stretching from Turkey's southwest coast into the Aegean Sea. The city features twin bays with views of Bodrum Castle. This medieval fortress was built partly with stones from the Mausoleum at Halicarnassus, one of the Seven Wonders of the Ancient World, completed in the 4th century B.C. The city is also a gateway for nearby beach towns and resorts. Although more than a million tourists flock to its beaches, boutique hotels, trendy restaurants, and clubs each summer, the town of Bodrum (ancient Halicarnassus) never seems to lose its cool. More than any other Turkish seaside getaway, it has an enigmatic elegance that pervades it. The evocative castle and the ancient ruins around town also help keep Bodrum a discerning step above the rest.

Which city is cheaper, Bodrum or Ephesus?

The average daily cost (per person) in Ephesus is $31, while the average daily cost in Bodrum is $35. These costs include accommodation (assuming double occupancy, so the traveler is sharing the room), food, transportation, and entertainment. While every person is different, these costs are an average of past travelers in each city. Below is a breakdown of travel costs for Ephesus and Bodrum in more detail.

The prices for places to stay in Ephesus can vary by date, location, and type. Generally, the average cost for accommodation per person is $10, while a typical double-occupancy hotel room for two people will cost around $20.

Travelers usually pay around $24 for a double occupancy room in Bodrum If you want to be in a premiere location or have high end amenities, you can expect to pay a bit more.

The price of a meal in Ephesus can vary widely. However, the average price for food per day is $8.34 per person, and a typical meal will cost around $3.34 based on the spending of previous visitors. Less expensive dining options can be found by eating street food or at fast food restaurants.

Bodrum food costs typically run travelers around $23 per day. Eating every meal in a nicer restaurant will drive the cost up, and grabbing fast food or casual meals will help you save money.

For Bodrum, here are some samples of tours and activities related to meals and dining experiences:

Public transportation tends to be much less expensive in Bodrum than paying for a taxi or private car service, as is expected. Typically, people spend $0.23 on transportation in Bodrum on average per day.

Hired Cars and Shuttles in Bodrum

Also for Bodrum, here are a few examples of actual transportation services:

Sightseeing expenses in Ephesus, including the cost of admission tickets for day tours, museums, and attractions, usually cost an average of $26 per day, per person.

Tours and Activities in Bodrum

Also, here are some specific examples of entertainment, tickets, and activities for Bodrum.

Alcoholic beverages can often be a significant portion of a traveler's budget, and the costs can vary greatly from person to person. In Ephesus, the average amount that a visitor spends on alcoholic beverages per day is $16.


When comparing the travel costs between Ephesus and Bodrum, we can see that Bodrum is more expensive. However, the two cities are actually relatively comparable in price, as the difference is somewhat minimal. Generally, this means that you could travel with generally the same travel style and level of luxury in each place. Since both cities are in Europe, it's no surprise that their costs are relatively close, as many destinations here have somewhat similar travel prices overall.

The Best Hostels in Bodrum, TurkeyDiyarbakirEphesusFethiyePamukkaleCappadocia 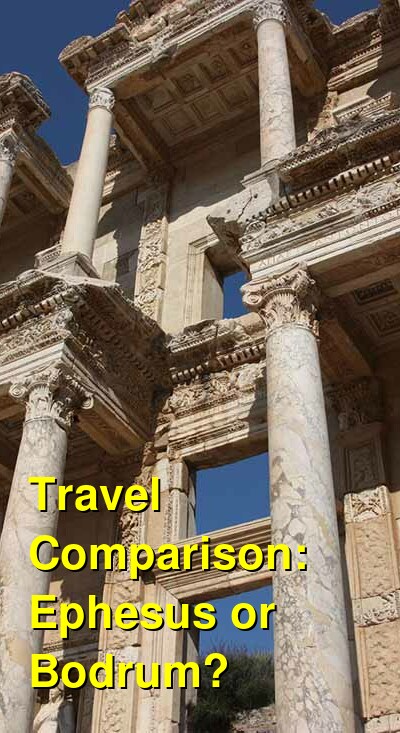