How much does it cost to travel to Ephesus?

How much money will you need for your trip to Ephesus? You should plan to spend around TRY269 ($14) per day on your vacation in Ephesus, which is the average daily price based on the expenses of other visitors. Past travelers have spent, on average, TRY71 ($3.84) on meals for one day and TRY97 ($5.24) on local transportation. Also, the average hotel price in Ephesus for a couple is TRY175 ($9.42). So, a trip to Ephesus for two people for one week costs on average TRY3,765 ($202). All of these average travel prices have been collected from other travelers to help you plan your own travel budget.

A vacation to Ephesus for one week usually costs around TRY1,882 for one person. So, a trip to Ephesus for two people costs around TRY3,765 for one week. A trip for two weeks for two people costs TRY7,529 in Ephesus. If you're traveling as a family of three or four people, the price person often goes down because kid's tickets are cheaper and hotel rooms can be shared. If you travel slower over a longer period of time then your daily budget will also go down. Two people traveling together for one month in Ephesus can often have a lower daily budget per person than one person traveling alone for one week.


How expensive is Ephesus? How much money do I need for Ephesus?

How much does a trip to Ephesus cost? Is Ephesus expensive? The average Ephesus trip cost is broken down by category here. All of these Ephesus prices are calculated from the budgets of real travelers.

Looking for a hotel in Ephesus? Prices vary by location, date, season, and the level of luxury. See below for options.

How much does it cost to go to Ephesus? Naturally, it depends on the dates. We recommend Kayak because they can find the best deals across all airlines.

The price of renting a car in Ephesus will depends on dates, the type of car, the location, and your age. We recommend Kayak because they can find the best deals across all car rental companies.

What did other people spend on Food in Ephesus?

Typical prices for Food in Ephesus are listed below. These actual costs are from real travelers and can give you an idea of the prices in Ephesus, but your costs will vary based on your travel style.

Tips and Handouts Budget in Ephesus

What did other people spend on Alcohol in Ephesus?

Typical prices for Alcohol in Ephesus are listed below. These actual costs are from real travelers and can give you an idea of the prices in Ephesus, but your costs will vary based on your travel style.

Ephesus On a Budget 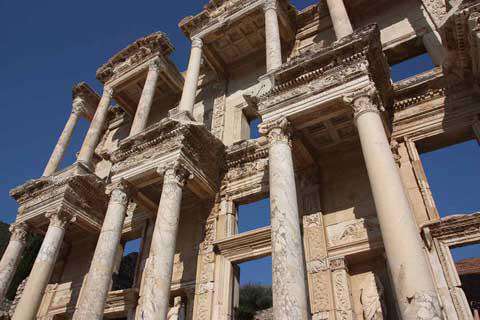 Ephesus
The ancient city of Ephesus was famed for the Temple of Artemis (completed around 550 BC). It is one of the Seven Wonders of the Ancient World. The temple was destroyed in 401 AD and rebuilt by Emperor Constantine I along with new public baths. The town was again partially destroyed by an earthquake in 614 AD. The city's importance as a commercial center declined as the harbor was slowly silted up by the Cayster River (Kucuk Menderes).

Selcuk is one of the closest towns to Ephesus and is where many visitors base themselves during their time in the area. It has a decent number of restaurants, bars and hotels, so it's a relatively convenient place to stay. It also has a handful of historical sights in its town center.

If you're traveling by cruise to Ephesus, then you'll likely be dropped off at Kusadasi. This is a coastal town in the Aydin Province of Aegean Turkey and the port where most cruises stop to visit Ephesus. The trip to Ephesus is about half an hour and there is public transportation, but most visitors are on cruise ships and have booked private tours. The town itself has some good restaurants that cater specifically to tourists. There are also plenty of shops where you can try your hand at bartering over any number of trinkets, but Persian rugs are a favorite, although expensive, item. Don't expect to get the best deals here, as most shop keepers are used to dealing with cruise ship passengers, for which there is a substantial markup.

Ephesus is filled with ancient ruins that will impress even the most jaded traveler. Important sights on the grounds include the East Gymnasium, the Basilica, the Prytaneion, the State Agora, the Square to Domitian, the Trajan Fountain, the Temple of Hadrian, the Scolasticia Baths, the Terrace Houses, the Celsus Library and the Temple to Serapis, among many other things.

If you're hoping to avoid the large tourist crowds, particularly those that come from cruise ships, then it's best to come very early in the morning. The weather is likely to be better at this time as well.

Selcuk is located to the east of Ephesus. If you're traveling to the area overland, then this is likely the town where you will stay the night. It has a decent number of reasonably prices hotels, as well as some restaurants and bars to entertain the tired traveler. To the southwest of Ephesus is the coastal town of Kusadasi. This is the port that most cruise ships use to visit the area. It has shops and restaurants that are often overpriced and convenient for cruise ship passengers to grab a meal or souvenir.

Ephesus has two entry or exit points that are located about three kilometers apart. Near each of these access points you'll find restrooms. The best entry point for the grounds is the upper Magnesia gate. You can then walk downhill to the exit at the lower harbour gate. You can explore the grounds in about two hours.

Touring Ephesus is the main reason for visiting this area. While you can experience and learn a lot with just a guidebook, guided tours do go more in depth into the historical importance of the area. Tour guides are variable in quality so some may be better than others.

Outside of Ephesus is a series of stalls selling tourist souvenirs. The prices are generally marked up and the quality of the items is poor, so it is best to avoid making purchases here. Also, come prepared with your own bottled water because once you're on the grounds you can expect to pay dearly for food and water.

You can grab a bite to eat at one of the many fast food Turkish restaurants near the exit gates to Ephesus. If you're looking for something more interesting to eat, then there are some decent restaurants on the route back to either Selcuk or Kusadasi. In the towns there are also some good restaurants that serve typical Turkish dishes.

If you're staying in Selcuk, then there are mini-buses that travel to and from Ephesus. You can also rent motorbikes or scooters if you want to explore the surrounding area. Many hotels offer free shuttles to Ephesus, but if you decide to take this option then realize that you are likely to stop at a carpet shop at some point during the trip.

You can take a bus from Kusadasi to Ephesus, but most visitors to this city are on cruises and transportation is arranged through their private tours. The trip takes about half an hour.

Once you arrive in Ephesus then it is possible to walk around the entire grounds on foot. There are stone pathways most places.