How much does it cost to travel to Cappadocia?

How much money will you need for your trip to Cappadocia? You should plan to spend around TRY116 ($15) per day on your vacation in Cappadocia, which is the average daily price based on the expenses of other visitors. Past travelers have spent, on average, TRY26 ($3.39) on meals for one day and TRY24 ($3.14) on local transportation. Also, the average hotel price in Cappadocia for a couple is TRY99 ($13). So, a trip to Cappadocia for two people for one week costs on average TRY1,622 ($215). All of these average travel prices have been collected from other travelers to help you plan your own travel budget.

A vacation to Cappadocia for one week usually costs around TRY811 for one person. So, a trip to Cappadocia for two people costs around TRY1,622 for one week. A trip for two weeks for two people costs TRY3,245 in Cappadocia. If you're traveling as a family of three or four people, the price person often goes down because kid's tickets are cheaper and hotel rooms can be shared. If you travel slower over a longer period of time then your daily budget will also go down. Two people traveling together for one month in Cappadocia can often have a lower daily budget per person than one person traveling alone for one week.


How expensive is Cappadocia? How much money do I need for Cappadocia?

How much does a trip to Cappadocia cost? Is Cappadocia expensive? The average Cappadocia trip cost is broken down by category here. All of these Cappadocia prices are calculated from the budgets of real travelers.

Find a hostel, guesthouse, or B&B in Cappadocia

Typical prices for Food in Cappadocia are listed below. These actual costs are from real travelers and can give you an idea of the prices in Cappadocia, but your costs will vary based on your travel style.

How much does it cost to go to Cappadocia? Naturally, it depends on the dates. We recommend SkyScanner or Kayak because they can find the best deals across all airlines.

Typical prices for Entertainment in Cappadocia are listed below. These actual costs are from real travelers and can give you an idea of the prices in Cappadocia, but your costs will vary based on your travel style.

Tips and Handouts Budget in Cappadocia

Typical prices for Water in Cappadocia are listed below. These actual costs are from real travelers and can give you an idea of the prices in Cappadocia, but your costs will vary based on your travel style.

Cappadocia On a Budget

Cappadocia at Night
Cappadocia is in Central Anatolia, between the mountains Erciyes, Melendiz and Hasan. It is famous for its underground cities, fairy chimneys, and caves. The landscape of the area is some of the most unique you'll ever see. The fairy chimneys are bizarrely shaped rock outcroppings that have evolved from the unique geography in the area. There are hiking trails through the series of valleys that make up the area. It's a great place to explore for outdoor enthusiasts and adventure seekers.

Cappadocia is located in inland Turkey at a high altitude. This gives the area a continental climate with hot and dry summers and cold and snowy winters. In general rainfall is sparse and the area is semi-arid.

There are some great underground cities you can visit in the area. If you're short on time and hope to see several things in one day, it may be best to visit the underground cities on a tour. If you're looking for a more independent experience, it's easy to catch a dolmus and make your way there on your own. In the end, the price of the two options is somewhat comparable, so it is best to decide how you want to visit instead of looking at price alone.

Other sights include the old Greek houses in Sinasos, the Goreme Open Air Museum, Ihlara Canyon and Gumusler Monastery.

Cappadocia is a region that includes several interesting towns. Goreme is the most popular town in the area. It is also centrally located and offers many opportunities to stay in cave hotels. It's central location makes it easy to reach the many nearby hikes. It's easy to arrive by bus and find accommodation after arrival, but if you're traveling during peak season your options may be more limited. If you have your heart set on staying in a cave hotel, you should likely make reservations in advance. The town's bus station in right in the middle of town. You'll also find a handful of restaurants and shops, as well as a market where you can buy food for a picnic lunch if you're planning on doing some longer hikes.

The nearby towns of Ortahisar and Uchisar have rock castles worth visiting. Two of the more popular hikes are Guvercinlik (Pigeon) Valley and Rose Valley. Nevsehir is the main province in Cappadocia and Urgup is the largest town. Avanos is a pottery town and Mustafapasa is an old Greek village.

Hiking is the most obvious activity in Cappadocia. There are many different hiking trails through the different valleys in the area. Hiking in this area is breathtaking and completely free of charge. Make sure you grab a map before you head out so that you can pick a trail that meets your needs. Popular valleys for hiking include Guvercinlik, or Pigeon Valley and Rose Valley. Pigeon Valley is located between Goreme and Uchisar. There's a four kilometer trail that can be picked up near the Ataman Hotel on the southern side of Goreme. Rose Valley is a beautiful green valley that also has some great trails.

Other interesting activities include going to the underground cities and visiting castles. If you're looking for a splurge, a popular activity is to take a sunrise hot air balloon ride over the area.

Restaurants in Cappadocia are generally concentrated in the towns and cities. Goreme offers visitors a good selection of reasonably priced restaurants, and many of the hotels also have meals available. Popular dishes include dried apricots and grapes, Manti, which is a ravioli made with minced meat and served with yoghurt and garlic sauce, Testi Kebap, which is meat and vegetables prepared in a clay pot, and pastirmali kuru fasulye, which is white beans with spiced meat. Kebab and pide dishes are also widely available.

Cappadocia is a large region and many of the attractions are spread out. If you're hoping to explore many different parts of the region then hiring a car may be your best option. Public transportation is generally limited due to the low population density of the area. A Dolums (minibus) service operates between many of the towns. From Goreme there is hourly, or every other hour connections to most of the larger towns such as Avanos or Urgup. Often the buses stop in the late afternoon so make sure you consult a schedule before beginning your trip. Tour packages also take visitors around the region and are reasonably priced. The price includes transportation, and this is probably the most efficient way to get around if you are short on time. 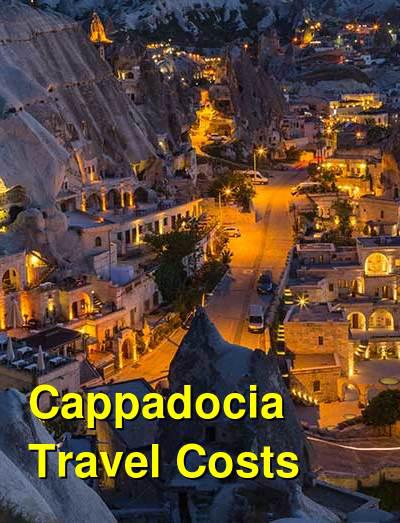 Stay in a Cave Hotel

By backpackguru in Accommodation
If you have traveled all of the way to Turkey and you've made your way to Cappadocia, don't pass up the opportunity to stay at a cave hotel. They are a range of options, of varying quality and price, to stay at. If you're a budget backpacker you can find some simple accommodations. If you're looking for a more high end experience there are also plenty of options. You can sleep in a cave with all of the amenities of home and the comforts of a traditional hotel. Goreme is centrally located in Cappadocia, so it is definitely the place you should stay!

By backpackguru
Because the Cappadocia area is very spread out and not densely populated, the transportation is somewhat limited. There are mini buses that take you to nearby towns, but they often run only once or twice a day. Definitely make sure you have the schedule ahead of time and you've planned out your route. If you're very short on time and want to get out and about to far away places, it may be worth it to consider taking a tour. You can usually join an organized tour through your hotel for a reasonable price, or you can arrange one through the many tour companies around town. They typically follow a standard route, but confirm what is included in the price before you agree to anything.