How much does it cost to travel to Ankara?

How much money will you need for your trip to Ankara? You should plan to spend around TRY85 ($12) per day on your vacation in Ankara, which is the average daily price based on the expenses of other visitors. Past travelers have spent, on average, TRY21 ($3.07) on meals for one day and TRY7.19 ($1.05) on local transportation. Also, the average hotel price in Ankara for a couple is TRY98 ($14). So, a trip to Ankara for two people for one week costs on average TRY1,190 ($174). All of these average travel prices have been collected from other travelers to help you plan your own travel budget.

A vacation to Ankara for one week usually costs around TRY595 for one person. So, a trip to Ankara for two people costs around TRY1,190 for one week. A trip for two weeks for two people costs TRY2,380 in Ankara. If you're traveling as a family of three or four people, the price person often goes down because kid's tickets are cheaper and hotel rooms can be shared. If you travel slower over a longer period of time then your daily budget will also go down. Two people traveling together for one month in Ankara can often have a lower daily budget per person than one person traveling alone for one week.


How expensive is Ankara?

How much does a trip to Ankara cost? Is Ankara expensive? The average Ankara trip cost is broken down by category here. All of these Ankara prices are calculated from the budgets of real travelers.

While meal prices in Ankara can vary, the average cost of food in Ankara is TRY21 per day. Based on the spending habits of previous travelers, when dining out an average meal in Ankara should cost around TRY8 per person. Breakfast prices are usually a little cheaper than lunch or dinner. The price of food in sit-down restaurants in Ankara is often higher than fast food prices or street food prices.

The cost of a taxi ride in Ankara is significantly more than public transportation. On average, past travelers have spent TRY7 per person, per day, on local transportation in Ankara.

How much does it cost to go to Ankara? Naturally, it depends on the dates. We recommend SkyScanner or Kayak because they can find the best deals across all of the airlines.

How much money do I need for Ankara?

How much do tours to Ankara cost? Multi-day tours can often be an effecient way to see the highlights of a country or region.

Find a hostel, guesthouse, or B&B in Ankara

Ankara On a Budget

Ankara, Turkey
Located at the heart of Turkey near Central Anatolia, Ankara is the capital city and second largest city in the country after Istanbul. Formerly known for its long-haired goats and textiles, the city has since developed into a metropolitan mix of modern cultures with historic landmarks.

The oldest landmark of Ankara is the ancient Ankara Castle, built on a rocky hilltop at the center of the city with panoramic views in all directions. The surrounding citadel showcases the remains of traditional architecture, including some structures which have been renovated into restaurants. Also visible from the castle are the ruins of a Roman Theatre. Roman statues found in the theatre are on display at the Museum of Anatolian Civilizations located on the south side of the castle. The museum also features artifacts from the Paleolithic era to classical times inside an Ottoman building and courtyard.

Another popular landmark in Ankara is An?tkabir-the mausoleum of Mustafa Kemal Ataturk, the founder of the Republic of Turkey. Today, the mausoleum houses the Museum of Ataturk and War of Independence. While this building is impressive with a marble hall and colonnades, the highest landmark in the city is Atakule Tower. The tower has an observation deck for views over the entire city. It can be seen from just about anywhere in the city on a clear day. As far as religious landmarks go, the Kocatepe Mosque stands out among the rest. Built in the neoclassical Ottoman-style, this is the city's largest mosque and can be seen from almost anywhere in Central Ankara with its tall towers.

Other important sights of Ankara include several additional mosques such as Hac? Bayram Mosque and Alaeddin Mosque (the oldest in the city), modern monuments and statues like the Victory Monument, and many archaeological remains including Roman roads, baths, and temples.

Ankara is a fairly large city with unique towns and neighborhoods throughout. Ulus is the historic center of the city, where most of the museums are located as well as historic buildings and the ancient Ankara Castle. From Ulus Square, in a north-south direction, extends Ataturk Boulevard, along which most of the city's attractions are situated. While Ulus is the historic center, much of its charm has been lost to a more crowded, modern atmosphere. To experience the way Ankara used to be, visit Hamamonu District instead, a beautifully restored neighborhood with old Ottoman-style Ankara houses. To see Ankara's political center, head to Kizilay Square where there are also plenty of cafes, restaurants, bars, and clubs. Other interesting neighborhoods include Sakarya Caddesi (Sakarya Road) pedestrian area with fisheries, street sellers, and restaurants or Yuksel Caddesi (Yuksel Road) pedestrian area with cafes, restaurants, cultural centers, and bookstores. While Ulus and Kizilay are important centers of activity with a few sights worth seeing, locals and visitors looking for charm and quality will frequent Ankara's other neighborhoods.

Ankara's dining scene is a reflection of its multicultural history, combining Central Asian, Middle Eastern, Eastern European, and Balkan cuisines. Being situated close to the heart of Turkey, the city takes a few specialties from Central Anatolia with items like ke?kek (meat and wheat or barley stew), mant? (a type of dumpling), and gözleme (a savory flatbread pastry dish). Kebabs with meats like beef or lamb are also very popular and can be served a variety of ways from being stuffed in a pita to being wrapped in thin flatbread. Doner kebab, roasted on a vertical spit, is found in Ankara. Traditional Turkish dishes, however, are largely based in rice (pilav), bread, and vegetables. Some common vegetables and other ingredients include eggplant, green peppers, onions, garlic, lentils, beans, zucchinis, and tomatoes. Fish is abundant, typically caught from the Mediterranean, and Turkish desserts mainly consist of some combination of nuts such as pistachios, chestnuts, almonds, hazelnuts, and walnuts, with spices like cinnamon, anise, clove, and many others.

Ankara Esenbo?a International Airport is located about 28 kilometers northeast of the city. Though it is Tukey's capital city, Ankara's services for international travel are limited. Turkish Airlines offers a few options, while Lufthansa, Austrian Airlines, and British Airways offer direct flights to their respective European hubs. For additional options many travelers opt to fly into Istanbul with a transfer to Ankara.

The city is, however, at the center of the Turkish rail network and can be reached from many cities. To ride from Istanbul to Ankara takes around 3 hours and 30 minutes by high-speed train.

Buses are also very efficient and inexpensive both within the city and to many other destinations in Turkey. 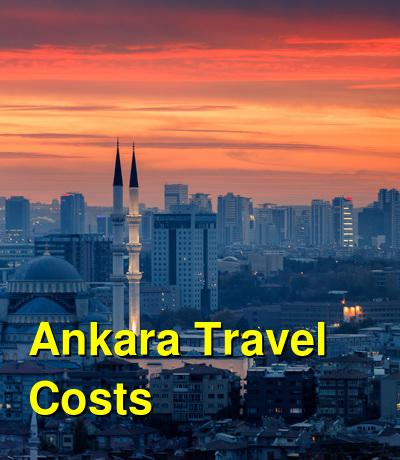