A Travel Price Comparison for Florida Key West vs. Panama City for Vacations, Tours, and Honeymoons

Should you visit Key West or Panama City?

Should I visit Key West or Panama City? This is a common question asked by many travelers. By figuring out which city is more affordable, you'll understand where you can get more bang for your buck. So, let's dive into the data, which all comes from actual travelers.

As the tropical breeze kisses your face amidst the never-ending rows of palm trees and high-rise beach condos, you find both pleasure and peace in this popular beach vacation spot. Such a city could be no place else than Panama City, Florida, located on the Florida Panhandle on the Gulf Coast. The entire region is known for it's calm beach with white sand, blue water, and spring break and summer vacation fun. Panama City offers a multitude of hotels, parks, beaches, and restaurants to make it a prime destination to both party and relax. However, as you explore the city, you will find that Panama City acquires its own diverse, vibrant character unique to other beach towns. Bring out the fishing rods and boogie boards and take advantage of one of Florida's most popular destinations! It's a great destination for families, kids, younger travelers, singles, couples, and retirees alike.

Which city is cheaper, Panama City or Key West?

The average daily cost (per person) in Key West is $170, while the average daily cost in Panama City is $179. These costs include accommodation (assuming double occupancy, so the traveler is sharing the room), food, transportation, and entertainment. While every person is different, these costs are an average of past travelers in each city. Below is a breakdown of travel costs for Key West and Panama City in more detail.

A hotel room in Panama City is about $206 This assumes double occupancy and modest accommodations.

On average, meal and food prices in Panama City cost around $53 per person, per day. While this price can vary widely by location, the type of restaurant, and the amount of food ordered, a typical meal often costs around $21.

Also, here are some specific examples of food and dining related activities in Panama City.

Some specific examples of transportation prices in Panama City:

Is it cheaper to fly into Key West or Panama City?

Prices for flights to both Panama City and Key West change regularly based on dates and travel demand. We suggest you find the best prices for your next trip on Kayak, because you can compare the cost of flights across multiple airlines for your prefered dates.

Panama City's costs for entertainment, tickets, attractions, and tours will often cost around $15 per person, per day. This cost can vary widely by the type of activity, however, as this includes admission tickets, day tours, museums, and other things to do.

Here are a few actual costs in Panama City for available activities, ticket prices, and tours:

While the amount that someone spends on alcohol while visiting Panama City may vary from person to person, on average a person spends $45 per day on alcoholic beverages.

Also in Panama City, these are the prices for nightlife and alcohol related activities from various tour providers:

When comparing the travel costs between Key West and Panama City, we can see that Panama City is more expensive. However, the two cities are actually relatively comparable in price, as the difference is somewhat minimal. Generally, this means that you could travel with generally the same travel style and level of luxury in each place. Since both cities are in North America, it's no surprise that their costs are relatively close, as many destinations here have somewhat similar travel prices overall. 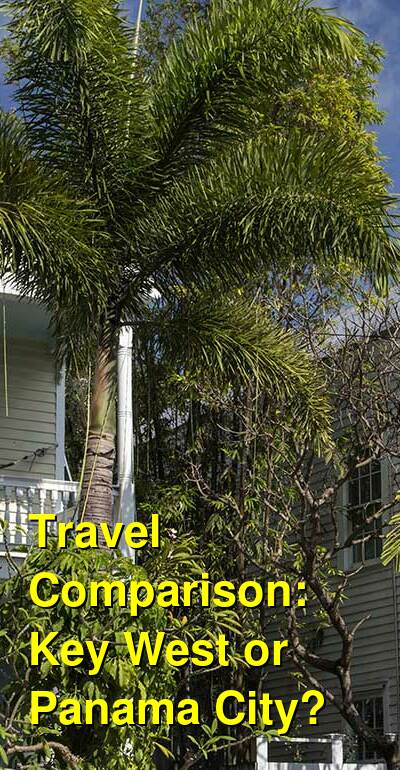