A Travel Comparison for Vacations, Honeymoons, and Tours South Korea vs. China

Should you visit South Korea or China?

South Korea and China have many things in common, yet many differences. Size, for one thing, is a huge difference. In many ways, South Korea's size has allowed it's economy to prosper, leading to a high-tech tourism industry. However, China still holds on to its past in many ways.

South Korea is a modern, cultural, and moderately priced Asian nation with a diverse number of sights and activities for its relatively small geographical size. Here you can experience big cities, rural countryside, beautiful mountains, unique national parks and relaxing beaches. Modern, western conveniences are all around, and at a price that is a little cheaper than Europe or North America, but still more expensive than many other destinations in Asia.

Which country is cheaper, China or South Korea?

Should I visit South Korea or China? This is a popular question for many travelers. By figuring out which country is more expensive, you'll understand where you'll get more bang for your buck. A week in China can cost you about $505 (per person), while a week in South Korea may cost you around $697. These differences become even more noticable if you plan to spend a longer time in the country. 10 days, two weeks, or even one month of travel to China or South Korea can really add to your travel budget.

When comparing food in South Korea vs. China they are not just different in cuisine, but also in price. Meal and restaurant costs in South Korea ($26) are often cheaper than China ($21).


How much are flights to South Korea and China?


Find a Hostel in South Korea or China

When is the best time to visit South Korea and China?

Waterfall on Jeju-do, South Korea
South Korea experiences four seasons, and winter can be cold with a decent amount of snow. However, skiing in the mountains is quite popular, so don't let winter turn you off. However, with warmer summer temperatures, this means that South Korea's peak travel season is from May to September. During this time you can expect more crowds and higher prices, but also more comfortable temperatures and more activities.

Why is South Korea more expensive than China?

South Korea's economy has been growing steadily for many decades, and this has led to both an increase in luxuries as well as a higher cost of living. For tourists, this translates into higher prices but a good value, as modern conveniences are everywhere. Hotels and hostels are spread throughout the country, but a good, healthy demand from tourists has led to higher prices all around compared to many other Asian nations.

What are the most expensive and cheapest cities and regions in South Korea and China? 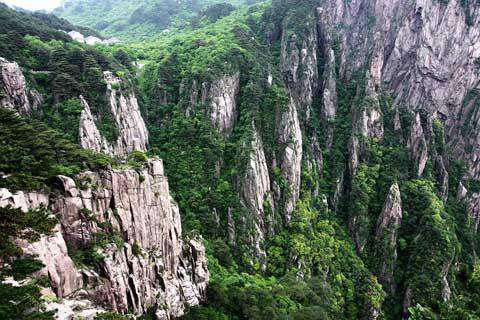 Huangshan
As is the case in many countries, the largest cities are often the most expensive destinations. This is generally true in both China and South Korea.

By far, the most expensive areas in South Korea are resort destinations. In the winter, skiing around mountain areas such as Pyeongchang can get very pricey, as hotels, restaurants, and entrance tickets charge a hefty penny. In the summer, various beach resort areas can experience similar price increases.

Some of the most expensive hotels and restaurants in China can be found in Beijing and Shanghai, as well as other touristy areas such as Guilin, Yangshuo, Xi'an, and Chengdu. But again, these crowded cities also offer cheaper options.

How you can save money when visiting South Korea and China?

In South Korea, booking ahead for a hotel or hostel can save you money. Locally owned places are not always cheaper, but do tend to have more interesting charm.

Eat with the locals. Local restaurants serving Korean food tend to be much cheaper than places serving western fare. Korean restaurant owners have figured out that many visitors don't care for Korean food, and will price their menus to take advantage of it. Find some Korean food that you like, and don't be afraid to experiment. Your tummy and your wallet will like it!

Use public transportation whenever possible.

Use public transportation whenever possible. China's network of trains between cities has grown lately, and high speed rail lines connect every major city in the east, as well as some in the west. Not only is it fast, but it's also affordable. And in South Korea, public transportation is cheap, fast, and clean.

Look into the price of flights in China. The Chinese government subsidizes many flights and airlines, leaving you with plenty of ways to get around this huge country fairly quickly.

Smile and make friends with the locals in China, especially the younger crowds. Many travelers have stories of how a friendly local got them a great deal or some other amazing benefit that they couldn't have gotten themselves. In both South Korea and China, the younger generations are better at English than their parents and grandparents.