A Travel Comparison for Vacations, Honeymoons, and Tours Japan vs. South Korea

Should you visit Japan or South Korea?

Japan and South Korea are often compared because they share much in common. Not only are they geographically close, but they have also seen massive economic growth since World War II, leading to very prosperous and high-tech economies and modern luxuries. With this growth, the people of these two nations have become wealthier and travel abroad themselves quite often. Modern luxuries abound in both nations, but at a higher cost than many of their Asian neighbors.

In Japan, you can visit ancient temples and castles and then retire to your super high-tech hotel after dining on cuisine from around the world. Outside of the larger cities, a calm agricultural countryside awaits you. Here you can go biking, hiking, boating, or even relax on a beach.

South Korea is a modern, cultural, and moderately priced Asian nation with a diverse number of sights and activities for its relatively small geographical size. Here you can experience big cities, rural countryside, beautiful mountains, unique national parks and relaxing beaches. Modern, western conveniences are all around, and at a price that is a little cheaper than Europe or North America.

Which country is cheaper, South Korea or Japan?

Should I visit Japan or South Korea? This is a popular question for many travelers. By figuring out which country is more expensive, you'll understand where you'll get more bang for your buck. A week in South Korea can cost you about $655 (per person), while a week in Japan may cost you around $818. These differences become even more noticable if you plan to spend a longer time in the country. 10 days, two weeks, or even one month of travel to South Korea or Japan can really add to your travel budget.

When comparing food in Japan vs. South Korea they are not just different in cuisine, but also in price. Meal and restaurant costs in Japan ($28) are often cheaper than South Korea ($24).


How much are flights to Japan and South Korea?


Find a Hostel in Japan or South Korea

When is the best time to visit Japan and South Korea? 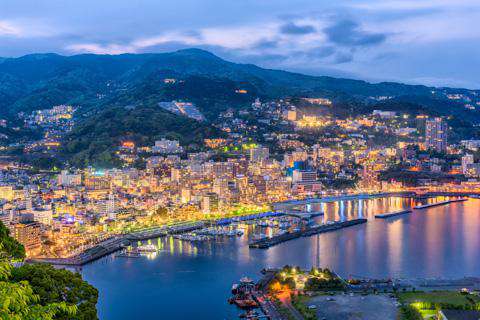 Atami, Japan
Both Japan and the Korean peninsula experience four full seasons, much like Europe and North America. Winters in northern Japan can be quite cold and snowy. The south is generally mild and warmer in the winter, however. However, skiing in the mountains of both nations is quite popular, so don't let winter turn you away.

With warmer summer temperatures, Japan and South Korea's peak travel seasons are from May to September. During this time you can expect more crowds and higher prices, but also more comfortable temperatures and more activities. As summers are the peak travel time, especially in the larger cities, visit during the shoulder seasons for mild weather and lower prices.

Why is Japan more expensive than South Korea?

While South Korea's economy and cost of living are higher than average for Asia, the country is still growing. This means relatively lower prices all around compared to some of its economically prospering neighbors such as Japan. Due to the strong supply of tourist-related businesses, along with a still growing cost of living, South Korea is often considered an inexpensive and affordable (but very modern) tourist destination for visitors from the U.S., Europe, or Australia.

What are the most expensive and cheapest cities and regions in Japan and South Korea?

Waterfall on Jeju-do, South Korea
The cities in Japan are usually more expensive than the countryside. In larger cities, and tourist destinations, such as Tokyo, Kyoto, and Sapporo, hotels and restaurants have higher prices due to more demand for services. While the countryside is not necessarily cheap, better bargains can be found, especially in rural areas away from heavily visited spots. Beach and resort destinations are also more expensive.

By far, the highest priced areas in South Korea are resort destinations. In the winter, skiing around mountain areas such as Pyeongchang can get very pricey, as hotels, restaurants, and entrance tickets charge a hefty penny. In the summer, various beach areas can experience similar price increases.

How you can save money when visiting Japan and South Korea?

Look for budget accommodation in both countries online, and shop around. This will help with your overall budget, as hotels and hostels tend to be somewhat expensive.

In South Korea, eat with the locals. Local restaurants serving Korean food tend to be much cheaper than places serving western fare. Korean restaurant owners have figured out that many visitors don't care for Korean food, and will price their menus to take advantage of it. Find some Korean food that you like, and don't be afraid to experiment. Your tummy and your wallet will like it!

Use public transportation in Japan or South Korea whenever possible. Taxis can be very expensive, and trains and buses go everywhere in both countries.

Japan vs. ChinaJapan vs. ThailandHong Kong vs. Japan