A Travel Price Comparison for France Toulouse vs. Strasbourg for Vacations, Tours, and Honeymoons

Should you visit Toulouse or Strasbourg?

Trying to figure out where to travel next? This travel comparison between Toulouse and Strasbourg can help. It includes a travel cost comparison in addition to other factors. For many travelers, the cost of a destination is a primary consideration when choosing where to go.

Strasbourg is the capital and largest city of the Grand Est region of France and is the official seat of the European Parliament. Located close to the border with Germany in the historic region of Alsace, Strasbourg is the perfect introduction to all that is unique about Alsace - walking a fine tightrope between France and Germany and between a medieval past and a progressive future. Strasbourg has a range of attractions from a fascinating Gothic Cathedral to the old town's twisting alleys lined with crooked half-timbered houses and cozy winstubs (Alsatian taverns) by the canals. Strasbourg is famous for its Christmas market and gingerbread and is also home to the glittering EU Quarter and hosts France's second-largest student population. Strasbourg is immersed in the Franco-German culture and although violently disputed throughout history, has been a bridge of unity between France and Germany for centuries. The city center is classified as a UNESCO World Heritage site, the first entire city to earn such an honor.

Which city is cheaper, Strasbourg or Toulouse?

The average daily cost (per person) in Toulouse is €100, while the average daily cost in Strasbourg is €111. These costs include accommodation (assuming double occupancy, so the traveler is sharing the room), food, transportation, and entertainment. While every person is different, these costs are an average of past travelers in each city. What follows is a categorical breakdown of travel costs for Toulouse and Strasbourg in more detail.

Hired Cars and Shuttles in Strasbourg

Also for Strasbourg, here are a few examples of actual transportation services:

Is it cheaper to fly into Toulouse or Strasbourg?

Prices for flights to both Strasbourg and Toulouse change regularly based on dates and travel demand. We suggest you find the best prices for your next trip on Kayak, because you can compare the cost of flights across multiple airlines for your prefered dates.

Tours and Activities in Strasbourg

Also, here are some specific examples of entertainment, tickets, and activities for Strasbourg.

Sample the Local Flavors in Strasbourg

Some specific costs for nightlife related activities in Strasbourg:

When comparing the travel costs between Toulouse and Strasbourg, we can see that Strasbourg is more expensive. However, the two cities are actually relatively comparable in price, as the difference is somewhat minimal. Generally, this means that you could travel with generally the same travel style and level of luxury in each place. Since both cities are in Europe, it's no surprise that their costs are relatively close, as many destinations here have somewhat similar travel prices overall.

Cheap Hotels in Strasbourg, France in the City CenterToulouseLilleToulonNantesMontpellier 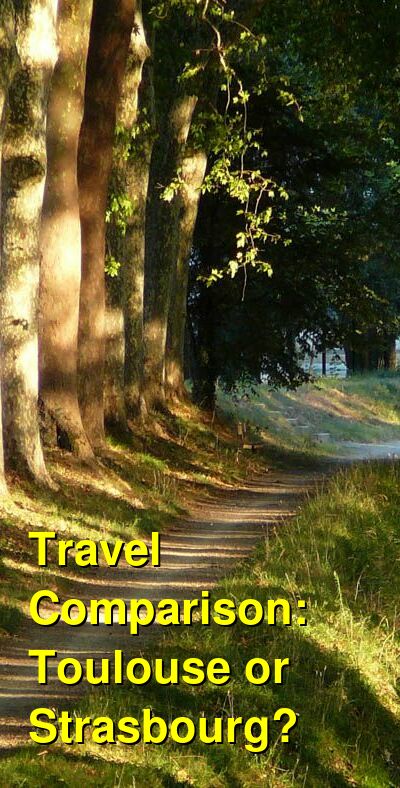