How much does it cost to travel to Strasbourg?

How much money will you need for your trip to Strasbourg? You should plan to spend around €111 ($117) per day on your vacation in Strasbourg, which is the average daily price based on the expenses of other visitors. Past travelers have spent, on average, €35 ($37) on meals for one day and €36 ($38) on local transportation. Also, the average hotel price in Strasbourg for a couple is €106 ($112). So, a trip to Strasbourg for two people for one week costs on average €1,548 ($1,635). All of these average travel prices have been collected from other travelers to help you plan your own travel budget.

A vacation to Strasbourg for one week usually costs around €774 for one person. So, a trip to Strasbourg for two people costs around €1,548 for one week. A trip for two weeks for two people costs €3,095 in Strasbourg. If you're traveling as a family of three or four people, the price person often goes down because kid's tickets are cheaper and hotel rooms can be shared. If you travel slower over a longer period of time then your daily budget will also go down. Two people traveling together for one month in Strasbourg can often have a lower daily budget per person than one person traveling alone for one week.


How expensive is Strasbourg? How much money do I need for Strasbourg?

How much does a trip to Strasbourg cost? Is Strasbourg expensive? The average Strasbourg trip cost is broken down by category here. All of these Strasbourg prices are calculated from the budgets of real travelers.

How much do vacation rentals cost in Strasbourg? Prices vary by location, date, size of the place, and the level of luxury. See below for options.

How much does it cost to go to Strasbourg? Naturally, it depends on the dates. We recommend Kayak because they can find the best deals across all airlines.

The price of renting a car in Strasbourg will depends on dates, the type of car, the location, and your age. We recommend Kayak because they can find the best deals across all car rental companies.

Cheap Hotels in Strasbourg, France in the City CenterReimsParisMarseilleLyonToulouse

Strasbourg On a Budget 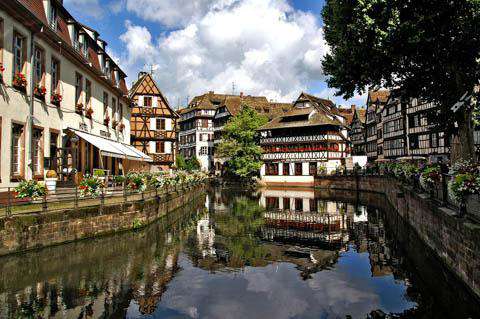 Strasbourg, France
Strasbourg is the capital and largest city of the Grand Est region of France and is the official seat of the European Parliament. Located close to the border with Germany in the historic region of Alsace, Strasbourg is the perfect introduction to all that is unique about Alsace - walking a fine tightrope between France and Germany and between a medieval past and a progressive future. Strasbourg has a range of attractions from a fascinating Gothic Cathedral to the old town's twisting alleys lined with crooked half-timbered houses and cozy winstubs (Alsatian taverns) by the canals. Strasbourg is famous for its Christmas market and gingerbread and is also home to the glittering EU Quarter and hosts France's second-largest student population. Strasbourg is immersed in the Franco-German culture and although violently disputed throughout history, has been a bridge of unity between France and Germany for centuries. The city center is classified as a UNESCO World Heritage site, the first entire city to earn such an honor.

One of the top sights in Strasbourg is the Cathedral Nortre Dame de Strasbourg. It is considered one of the most beautiful monuments of Western architecture with its massive tower. This impressive Cathedral built out of red Vosges sandstone took several centuries to complete and displays a range of architectural styles-from 12th-century Romanesque to 15th-century Late Gothic. The exterior of the Cathedral functions as a lesson in biblical stories, complete with hundreds of figures and has beautiful medieval stained glass windows.

The Maison Kammerzell is another popular sight. This building (now a hotel with a renowned restaurant, located opposite the Tourist Office) is the finest old burgher's house in the city. Considered a gem of Alsatian architecture, the Kammerzell House features a stone-built ground floor, half-timbered upper floors, traditional leaded windows, and rich carved ornamentation.

The Quartier Krutenau, one of Strasbourg's most lively neighborhoods, combines Old World charm with trendy restaurants, fashionable shops, and art galleries. This quarter has a friendly village atmosphere and is a pleasant area to take a sightseeing stroll.

One of the biggest activities in Strasbourg is the famous Christkindle Market, which is absolutely something you must do on your one-day itinerary in Strasbourg. It operates from the end of November through the end of December and has been a tradition since 1570. During this time, Strasbourg's houses, streets, and churches are decorated with Christmas lights, and a giant 30-meter Christmas tree is placed in the center of the city at the Place Kleber. Strasbourg's Christmas markets are among the largest and most interesting in Europe. The city has eleven sites throughout the city's historic center with 300 "chalets" featuring typical Christmas decorations, arts and crafts, and seasonal Alsatian food such as gingerbread and foie gras.

In addition to the markets and festivals, Strasbourg has many other things to do, from several museums to explore, to wine tasting tours, Segway tours, bicycle tours, and many other tour options are available.

Strasbourg has a lot to offer with food and dining as well. A few local dishes to watch for include: Tarte Flambee, which is crusty bread dough is rolled into a thin rectangle and generously covered with fromage blanc, onion petals and lardons; Choucroute Garnie, which is cabbage (sauerkraut), traditionally cooked with a glass of Riesling and a variety of spices; and Baeckeoffe, which is casserole of sliced potatoes, onions, beef and pork. And for a few restaurant ideas, look for: Hippopotamus, which offers traditional French food; Ancienne Douane, which offers great local Alsatian dishes; and Le Panier Au Marche, which is a modern take on French cuisine with Alsatian and Asian influences.

Strasbourg has its own airport, which caters mostly to domestic flights, but does take some international flights as well. It would be possible to connect to Strasbourg through other larger airports in the country. The city is connected to other large citied in France through the TGV network and it is possible to get there on public transit. The city itself also has a good public transportation center, though much of the city center caters more to pedestrian traffic. And of course, renting a car for your time there is another option.