How much does it cost to travel to Toulon?

How much money will you need for your trip to Toulon? You should plan to spend around €95 ($100) per day on your vacation in Toulon, which is the average daily price based on the expenses of other visitors. Past travelers have spent, on average, €24 ($25) on meals for one day and €5.71 ($6.01) on local transportation. Also, the average hotel price in Toulon for a couple is €126 ($132). So, a trip to Toulon for two people for one week costs on average €1,331 ($1,400). All of these average travel prices have been collected from other travelers to help you plan your own travel budget.

A vacation to Toulon for one week usually costs around €666 for one person. So, a trip to Toulon for two people costs around €1,331 for one week. A trip for two weeks for two people costs €2,662 in Toulon. If you're traveling as a family of three or four people, the price person often goes down because kid's tickets are cheaper and hotel rooms can be shared. If you travel slower over a longer period of time then your daily budget will also go down. Two people traveling together for one month in Toulon can often have a lower daily budget per person than one person traveling alone for one week.


How expensive is Toulon? How much money do I need for Toulon?

How much does a trip to Toulon cost? Is Toulon expensive? The average Toulon trip cost is broken down by category here. All of these Toulon prices are calculated from the budgets of real travelers.

How much do vacation rentals cost in Toulon? Prices vary by location, date, size of the place, and the level of luxury. See below for options.

How much does it cost to go to Toulon? Naturally, it depends on the dates. We recommend Kayak because they can find the best deals across all airlines.

The price of renting a car in Toulon will depends on dates, the type of car, the location, and your age. We recommend Kayak because they can find the best deals across all car rental companies.

The Best Hostels and Cheap Hotels in Toulon, FranceMarseilleNiceAix-en-ProvenceAvignonCannes

Toulon On a Budget 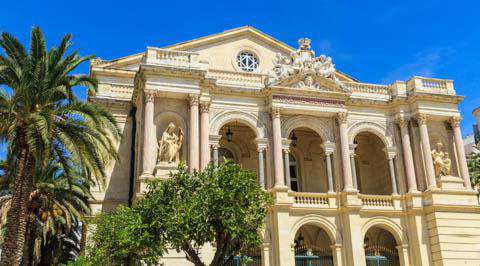 Toulon, France
Located between Marseille and Nice, Toulon is in the western portion of the French Riviera and in the southeast of Provence. It's economy is heavily reliant on a French naval base in the area. This base is responsible for the creation of thousands of jobs. The city is also a significant tourist destination, with over 150,000 visitors every year.

It's a wonderful year around destination and has a climate similar to that found elsewhere in the south of France. The summers can be quite hot and there are infrequent but sudden thunderstorms. The rainiest season is likely to be fall, when storms are more frequent. Winters are drier and cool, but rarely below freezing.

The city's old town dates back to the Middle Ages. There are many small streets that are fun to wander through. Interesting wider streets include Algiers and Lafayette Streets where you'll find many shops. They do get crowded on Saturdays. Important sights in the old town area include the monumental clock, Tour de l'horloge, Saint Francois de Paule church, Saint Marie de la Seds Cathedral, the traditional markets along Cours Lafayette, and Place Puget.

The new town is where you'll find most of the city's museums. Some sights in the New Town area worth visiting are the Navy Museum, the Museum of Tour Royale, the Boat-Museum, and the municipal library. South of the Mourillon quarter you'll find a few decent beaches but do expect them to be crowded, particularly during the summer months. Also take a ride on the cable car which runs to the Mont-Faron Hill.

Popular parks in the city are the Frederic Mistral Garden where you'll likely see young couples having their wedding photos made and Alexandre the 1st Garden where there are frequent concerts on Sundays, particularly during the summer months.

The city is split into a historic old town and a new town. The old town area has many of the historic buildings, impressive architecture, and narrow, wandering streets. It is north of the harbor and is pleasant to walk around. The harbor area also features a promenade that is lined with souvenir shops, bars, and restaurants specializing in fresh seafood. The new town is north of the old town and has many of the city's museums.

Other neighborhoods include Le Mourillon which is a small seaside area to the east of Toulon near the harbour. Mount Faron climbs 584 meters and can be reached by cable car or a road that ascends from the west side and descends on the east. At the top there is a memorial that is dedicated to the 1944 Allied landing in Provence and the liberation of Toulon.

Many people enjoy going to the beach in Toulon, so they can get crowded when the weather is nice. Several of the nearby small towns have nice beaches. Examples include Les Sablettes in La Seyne sur Mer, L'Argeniere in the town of La Londe-les-Maures, and La Capte near Hyeres.

There are several popular events held annually in Toulon. Jazz in Toulon is an annual music festival that attracts a crowd. Bastille Day is on July the 14th and a military march goes through the main boulevards. There is also an aircraft show in the afternoon and fireworks are shot off at midnight.

Food is availabe for a range of budgets in Toulon. There are many local and regional specialties that are worth trying. The cuisine combines the influences of the Mediterranean and the city's location within Provence. Popular local specialties include Cade Toulonnaise, which is made with chickpea flour. It is a thin, unleavened pancake that is very similar to the Socca that is found in Nice. Chichi Fregi is also a delicious option. It's a type of donut that is found throughout Provence. If you're on a tight budget there are street vendors throughout the city. They often sell smash sandwiches, which come in a variety of versions and styles. The general idea is that it is a sandwich that is grilled in a panini press.

Toulon is easily accessible by nearby towns. Marseille is a 45 minute train ride and there are frequent connections with Nice as well. The city has a regional airport, Toulon-Hyeres Regional Airport, that is 18 kilometers to the east of town. It has flights that connect with many other French airports. There's a bus that connects the train station with the airport four times a day. The last bus can be caught at the airport at 7:30 pm. If you arrive in town later than that, then your only option is to take a taxi into town.