How much does it cost to travel to Nantes?

How much money will you need for your trip to Nantes? You should plan to spend around €87 ($94) per day on your vacation in Nantes, which is the average daily price based on the expenses of other visitors. Past travelers have spent, on average, €22 ($24) on meals for one day and €29 ($31) on local transportation. Also, the average hotel price in Nantes for a couple is €96 ($104). So, a trip to Nantes for two people for one week costs on average €1,213 ($1,319). All of these average travel prices have been collected from other travelers to help you plan your own travel budget.

A vacation to Nantes for one week usually costs around €607 for one person. So, a trip to Nantes for two people costs around €1,213 for one week. A trip for two weeks for two people costs €2,426 in Nantes. If you're traveling as a family of three or four people, the price person often goes down because kid's tickets are cheaper and hotel rooms can be shared. If you travel slower over a longer period of time then your daily budget will also go down. Two people traveling together for one month in Nantes can often have a lower daily budget per person than one person traveling alone for one week.


How expensive is Nantes? How much money do I need for Nantes?

How much does a trip to Nantes cost? Is Nantes expensive? The average Nantes trip cost is broken down by category here. All of these Nantes prices are calculated from the budgets of real travelers.

Looking for a hotel in Nantes? Prices vary by location, date, season, and the level of luxury. See below for options.

How much does it cost to go to Nantes? Naturally, it depends on the dates. We recommend Kayak because they can find the best deals across all airlines.

The price of renting a car in Nantes will depends on dates, the type of car, the location, and your age. We recommend Kayak because they can find the best deals across all car rental companies.

Nantes On a Budget 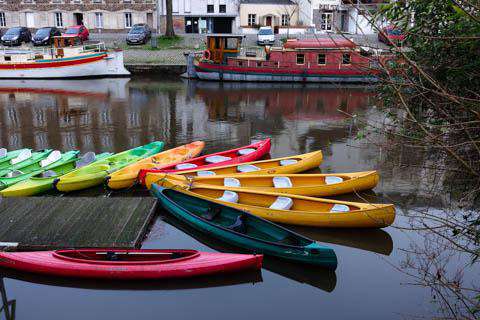 Nantes, France
Nantes is a city in western France, located on the Loire River, 31 miles from the Atlantic coast. The city is the sixth largest in France, with almost 600,000 inhabitants within the Urban area. Together with Saint-Nazaire, a seaport located on the Loire estuary, Nantes forms the main metropolis of north-western France. The city has a unique architectural heritage with its magnificent Chateau des ducs de Bretagne - a Renaissance-style castle nestled in a fortress, a medieval quarter and one of the highest cathedrals of France. It has been transformed in the last 20 years probably more than any other city in France. It is not only a vibrant and young metropolis often rewarded for its top-quality of life, but a city where art has literally been integrated in all possible aspects, making it a true example of how artists can turn a city upside down.

The Chateau des ducs de Bretagne is one of the biggest sights in Nantes. It is a powerful symbol of Nantes' place in Breton history. The dukes having chosen Nantes for capital made the castle a real town within the town. The contrast between the exterior fortifications and the Renaissance-inspired inner buildings is unique. The castle was the last ducal residence of Brittany before the nation was merged with the Kingdom of France. It was also the birthplace and home of Anne of Brittany, who became twice Queen of France. Here in the heart of the city, you can retrace five centuries of history, admire the finely executed facades and terraces and walk the castle walls. Today the castle also houses the fascinating Nantes History Museum.

Another popular sight is the Nantes Cathedral or the Cathedral of Saint Pierre and Saint Paul. It is a Gothic Roman Catholic cathedral that took 457 years to complete.

Nantes is pretty large, so there are a few different neighborhoods. One of the main neighborhoods is the city center, which is mostly pedestrianized, where most of the art, attractions, and shopping is located.

There is also the historic center, where the castle and fortified city within a city can be found as well as some of the other historic buildings and monuments. You can also check out the medieval district, which is lined with many boutique style shops.

Nantes has many different attractions and things to do with the great museums and beautiful gardens just barely scratching the surface. Come visit during the summer to experience the Le Voyage a Nantes, which encourage art and culture in the city, and invites artists from all over the world to use Nantes as a playground for their creativity. Come experience this fantastic event and enjoy a 10 km long itinerary with surprising installations from artists, great exhibitions and playgrounds.

For something incredibly unique and original, check out the Machines of the Isle of Nantes: an artistic, touristic and cultural project in the old covered buildings of the former shipyards that were at one time used for ship construction and later used as business sites. The projects were created by two artists and aim to promote the city's image and build an identity as a creative metropolis of dream and of fantasy. One of the most popular of the machines is The Great Elephant, which is 12 meters high and 8 meters wide, and made from 45 tons of wood and steel. It can take up to 49 passengers for a 45-minute walk around town. Other machines include The Marine Worlds Carousel, and The Heron Tree.

Nantes, like much of France, has some excellent dining options. With fresh seafood coming in daily from the river and nearby Atlantic coast and fresh vegetables, dairy, and meant from local farms, there is not shortage of fresh, delicious options on the local menus. There are a few local dishes to watch for that are native to the area: fish in beurre blanc sauce, which is a light, creamy sauce made of butter, vinegar, wine and spices, and Gateau nantais, a delicious cake made with butter and sugar and flavored with almonds and rum.

There is an international airport in the south of Nantes (Nantes-Atlantique) with regular connections to Paris, Lyon and other French cities. Ryanair, Cityjet, Easyjet and Flybe operate flights from the UK.

If you fly into Paris, there are also train routes that will get you to Nantes in about two hours. From the Nantes airport you can take either a bus or tram into the city center.

Nantes has an excellent public transportation system with three different tramlines, a few bus route options, and even a public boat system on the river.