How much does it cost to travel to Bordeaux?

How much money will you need for your trip to Bordeaux? You should plan to spend around €95 ($99) per day on your vacation in Bordeaux, which is the average daily price based on the expenses of other visitors. Past travelers have spent, on average, €36 ($38) on meals for one day and €12 ($13) on local transportation. Also, the average hotel price in Bordeaux for a couple is €101 ($105). So, a trip to Bordeaux for two people for one week costs on average €1,325 ($1,380). All of these average travel prices have been collected from other travelers to help you plan your own travel budget.

A vacation to Bordeaux for one week usually costs around €662 for one person. So, a trip to Bordeaux for two people costs around €1,325 for one week. A trip for two weeks for two people costs €2,650 in Bordeaux. If you're traveling as a family of three or four people, the price person often goes down because kid's tickets are cheaper and hotel rooms can be shared. If you travel slower over a longer period of time then your daily budget will also go down. Two people traveling together for one month in Bordeaux can often have a lower daily budget per person than one person traveling alone for one week.


How expensive is Bordeaux? How much money do I need for Bordeaux?

How much does a trip to Bordeaux cost? Is Bordeaux expensive? The average Bordeaux trip cost is broken down by category here. All of these Bordeaux prices are calculated from the budgets of real travelers.

Looking for a hotel in Bordeaux? Prices vary by location, date, season, and the level of luxury. See below for options.

How much does it cost to go to Bordeaux? Naturally, it depends on the dates. We recommend Kayak because they can find the best deals across all airlines.

The price of renting a car in Bordeaux will depends on dates, the type of car, the location, and your age. We recommend Kayak because they can find the best deals across all car rental companies.

Bordeaux On a Budget 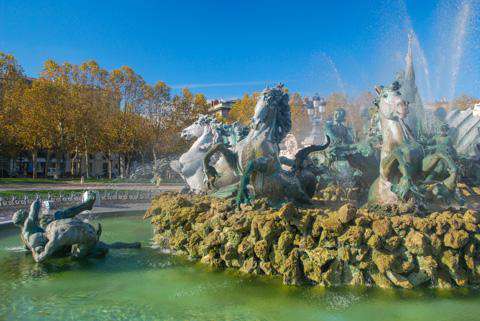 Bordeaux
Bordeaux is the place to go for fine wines. It's a very mellow, cultural city where you can enjoy the relaxed atmosphere of a quaint cafe or restaurant without being rushed. The city is the capital of Gironde, and the entire metropolitan area has over one million residents. The city also has a rather large and vibrant university and the population is known to be very tolerant and liberal. There is a very strong artistic vibe in the city and, due to it's history of English rule, there is an English flair to the area. The large student population means that there is no shortage of opportunities to see shows, hear music, or visit a museum.

The city is located on the banks of the Garonne. The climate is oceanic, but the summers are warmer and the winters are milder than you might expect. There are frequent frosts during the winter months but it almost never snows. It rains predominantly during the summer months and the temperatures average a pleasant 22 degrees Celsius.

Bordeaux is famous for it's architecture and sights. Les Quais is a great area to walk along the river. Many of the historical monuments are found in La Victoire, and the Pedestrian Center is where you'll find great shopping. Other interesting squares include Gambetta Square and Quinconces Square. The Jacques-Chaban-Delmas lift bridge is impressive as well.

Bordeaux is a large city, but most of the tourist attractions are concentrated in the downtown area. Several notable neighborhoods include Chartrons, the city center, Saint Jean, and La Victoire. Chartrons sits on the banks of the river and used to be at the center of the wine trade. Today it is a quiet residential area that is home to the antique shop village and the Chartrons Museum. The city center is right in the middle of the city. The Saint Pierre Quarter is the historic center of the town and it has quaint streets and many excellent restaurants. You'll also find impressive architecture and a beautiful fountain. Saint Jean is where you'll find the city's train station as well as many hotels, restaurants and sex shops. La Victoire is the most vibrant and colorful part of town. There's a young vibe and this is the place to go if you want to interact with the students in the area.

The most popular activity in Bordeaux is to take a tour of the vineyards and taste the local wines. Or how about a Bordeaux wine workshop? This is the second largest wine growing region in the world, so anything you do here should obviously involve wine, right? There are also summer wine festivals that are worth experiencing if you're in town.

Other activities include walking along the Sainte-Catherine Street in the Pedestrian Center, climbing the tower of Saint-Michel, visiting Jardin Botanique, or visiting the Musee du Vin et du Negoce.

Dining in Bordeaux is an experience in and of itself. There are no shortage of restaurants, many of them French, but there is also a decent representation of Asian, Middle Eastern, or African options. If you're looking for great French food there are restaurant options that offer samplings from all over the country. It truly is a delight for food lovers, and it is worth the splurge to get a taste of the region's best specialties.

Make sure you head down Rue de Saint Remi, which is officially the street of restaurants of Bordeaux. You can easily reach this area by tram and it is near many of the main tourist attractions, so it's a convenient stopping point to enjoy a meal.

As a larger city, Bordeaux has a decent public transportation system. As a tourist, however, you can spend most of your time walking as most of the sights are concentrated in the compact downtown area. There is even a substantial area that is pedestrian only. Driving is not recommended as traffic is quite bad and parking can be incredibly expensive.

If you do decide to take public transportation, your options include buses, trams and a ferry. Buses are efficient and cheap, and are likely to access most destinations you may want to visit around town that you cannot walk to. The ferry, called Le Bus du Fleuve, connects the western and eastern parts of the city. It can be accessed with a standard bus ticket and travels between the southern part of Quai Richelieu and the Place Aristide Briand. The tramway is relatively new and crosses the Garonne via the Pont de Pierre.

By backpackguru in Entertainment
If you're a sports fan, Bordeaux is a great place to catch a soccer game. the F.C. Girondins are one of the best teams in France, and the games are taken very seriously by locals. You can usually buy some tickets before the game at the ticket office, 'Place Johnston', at the South Western corner of the stadium. If they're playing a rival, the tickets might sell out, but generally they are available. Ticket prices can vary dramatically, costing anywhere from 9 euros to 80 euros depending on the game and the seats.