A Travel Price Comparison for Italy Turin (Torino) vs. Brescia for Vacations, Tours, and Honeymoons

Should you visit Turin (Torino) or Brescia?

If you're trying to decide where to visit between Turin (Torino) or Brescia, this travel cost comparison can help. The overall cost of travel is usually a consideration when deciding where to go next, and the cost comparison below can help you decide based on the average prices from other travelers along with your own travel budget.

As you look up to the heavens, marveling at the scattered puffs of white clouds kissed by the sun in its golden hue and set against a clear blue sky, you return your gaze to your surrounding land: an Italian paradise of lush forests, majestic Alps, mouth-watering aromas of local bakeries and restaurants, and a romantic cityscape. Brescia is located in the Lombardy region of Northern Italy. Nestled away between the two bustling cities of Milan and Verona, Brescia stands at the foot of the Alps beside the breathtaking Lake Garda. Once a "pass-through" city of Italy, Brescia is now considered the "lioness of Italy" in its rich culture and impressive history. Founded over 3,200 years ago, Brescia's significance in pre-Roman times has allowed it to still retain in its global fame. From the oldest ruins of Northern Italy to hidden gems of Lombardy's natural world, Brescia holds some of the most well-preserved Roman architecture in Italy. A dynamic, hardworking city, Brescia holds about 200,000 inhabitants and is the second-largest city in the Lombardy region. A city that captures the heart and soul of Italian tradition, experience Italy in all its glory in Brescia!

Which city is cheaper, Brescia or Turin (Torino)?

The average daily cost (per person) in Turin (Torino) is €126, while the average daily cost in Brescia is €115. These costs include accommodation (assuming double occupancy, so the traveler is sharing the room), food, transportation, and entertainment. While every person is different, these costs are an average of past travelers in each city. Below is a breakdown of travel costs for Turin (Torino) and Brescia in more detail.

A hotel room in Turin (Torino) is about €126 This assumes double occupancy and modest accommodations.

A hotel room in Brescia is about €120 This assumes double occupancy and modest accommodations.

While taxis and private drivers typically cost much more than public transportation, people usually spend around €35 per day to get around in Turin (Torino).

The cost of a taxi ride in Brescia is significantly more than public transportation. On average, past travelers have spent €15 per person, per day, on local transportation in Brescia.


Is it cheaper to fly into Turin (Torino) or Brescia?

Prices for flights to both Brescia and Turin (Torino) change regularly based on dates and travel demand. We suggest you find the best prices for your next trip on Kayak, because you can compare the cost of flights across multiple airlines for your prefered dates.

The price of a meal in Turin (Torino) can vary widely. However, the average price for food per day is €34 per person, and a typical meal will cost around €14 based on the spending of previous visitors. Less expensive dining options can be found by eating street food or at fast food restaurants.

The price of a meal in Brescia can vary widely. However, the average price for food per day is €37 per person, and a typical meal will cost around €15 based on the spending of previous visitors. Less expensive dining options can be found by eating street food or at fast food restaurants.

Below are a few samples from actual travelers for food and meal costs in Brescia:

Activities, things to do, and other forms of entertainment usually cost around €22 per person, per day in Turin (Torino). This cost includes the price of admission tickets to attractions and museums as well as daily tours.

Entertainment and activities in Brescia typically cost an average of €25 per person, per day. This includes fees paid for admission tickets to museums and attractions, day tours, and other sightseeing expenses.


Tours and Activities in Brescia

Here are a few actual costs in Brescia for available activities, ticket prices, and tours:

The average person spends about €6.86 on alcoholic beverages in Turin (Torino) per day. The more you spend on alcohol, the more fun you might be having despite your higher budget.

While the amount that someone spends on alcohol while visiting Brescia may vary from person to person, on average a person spends €18 per day on alcoholic beverages.


When comparing the travel costs between Turin (Torino) and Brescia, we can see that Turin (Torino) is more expensive. However, the two cities are actually relatively comparable in price, as the difference is somewhat minimal. Generally, this means that you could travel with generally the same travel style and level of luxury in each place. Since both cities are in Europe, it's no surprise that their costs are relatively close, as many destinations here have somewhat similar travel prices overall. 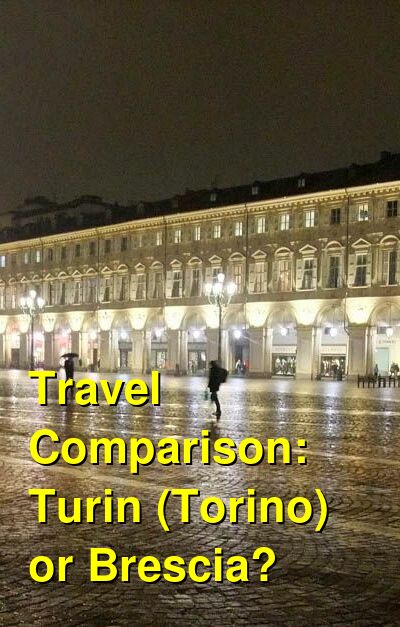