How much does it cost to travel to Bologna?

How much money will you need for your trip to Bologna? You should plan to spend around €141 ($147) per day on your vacation in Bologna, which is the average daily price based on the expenses of other visitors. Past travelers have spent, on average, €32 ($34) on meals for one day and €16 ($17) on local transportation. Also, the average hotel price in Bologna for a couple is €151 ($157). So, a trip to Bologna for two people for one week costs on average €1,979 ($2,061). All of these average travel prices have been collected from other travelers to help you plan your own travel budget.

A vacation to Bologna for one week usually costs around €990 for one person. So, a trip to Bologna for two people costs around €1,979 for one week. A trip for two weeks for two people costs €3,958 in Bologna. If you're traveling as a family of three or four people, the price person often goes down because kid's tickets are cheaper and hotel rooms can be shared. If you travel slower over a longer period of time then your daily budget will also go down. Two people traveling together for one month in Bologna can often have a lower daily budget per person than one person traveling alone for one week.


How expensive is Bologna? How much money do I need for Bologna?

How much does a trip to Bologna cost? Is Bologna expensive? The average Bologna trip cost is broken down by category here. All of these Bologna prices are calculated from the budgets of real travelers.

Looking for a hotel in Bologna? Prices vary by location, date, season, and the level of luxury. See below for options.

How much does it cost to go to Bologna? Naturally, it depends on the dates. We recommend Kayak because they can find the best deals across all airlines.

The price of renting a car in Bologna will depends on dates, the type of car, the location, and your age. We recommend Kayak because they can find the best deals across all car rental companies.

What did other people spend on Entertainment in Bologna?

Typical prices for Entertainment in Bologna are listed below. These actual costs are from real travelers and can give you an idea of the prices in Bologna, but your costs will vary based on your travel style.

Bologna On a Budget 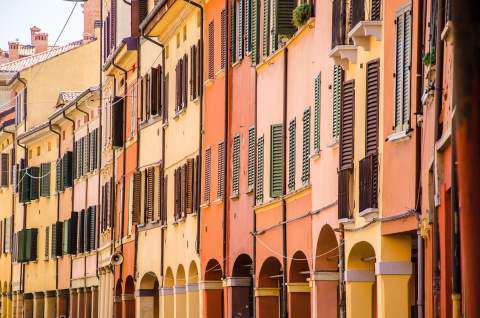 Bologna, Italy
Bologna is the capital city of the northern region of Italy, Emilia-Romagna, with a population of 380,000. It is a historical city known well by Italians, however, not as well known among foreigners. The locals of Bologna speak little to no English. The city is most known for having the oldest university in the West. Another reason many visit this city is because of its exquisite cuisine. Many Italians would consider it one of the most beautiful cities in the entire country because of its impeccably preserved historic centers. The best time to visit Bologna is usually between March and October, although bare in mind that July and August can get quite hot.

Museums are plentiful in the city of Bologna. If you wish to see several of these museums, it is wise to buy a museum card. This grants you access to the main museums and gets you a discount at some of the smaller museums around the city. It costs six euros for one day or eight euros for three days. You can purchase this card at a museum or an information office.

The Archaeological Museum is one of the main museums, housed in an old hospital building, with exhibits ranging from Egyptian civilization to historic Roman times. If you wish to take a break from the historical aspects of Bologna, visit the Gallery of Modern Art of Bologna, located at Don Giovanni Minzoni 14. Within the University, which is a sight in itself, are multiple small museums that are interesting to visit.

Piazza Maggiore is the large square located in the old city center where you can see prominent buildings like the Basilica of San Petronio, the Palazzo del Podesta, and the City Hall building. For a view of Bologna from above, the Tower of the Asinalli is the best place to go. It is three hundred and thirty feet tall and has four hundred and ninety eight steps to get all the way up to the top.

If you wish to see beautiful parks and gardens, visit Giardini Margherita, Orto Botanico, or Parco Cavaioni. These are all beautiful gardens and parks with meadows, lakes, various plant species and gorgeous views.

As stated before, Bologna is part of the Emilia-Romagna region in northern Italy. There are many towns nearby that are great places for taking the train and spending the day. Ferrara is one of the cities and its historical center has been named a UNESCO World Heritage Site. Rimini is another town nearby that is great for spending the day at the beach.

Bologna is known for its food, so spending a day learning to cook would be a great activity while visiting. Cook Italy is located in the city center and offers cooking classes with menus that can be customized to your liking.

There are many events and festivals that happen in Bologna. A film festival takes place in July in the Piazza Maggiore Square. Around October, you can catch the Motor Show Bologna that showcases rare automobiles of Italy. There are also a few car museums in town as well (Ducati Museum, Lamborghini Museum, and Ferrari Museum). Music is another big part of Bologna culture, it is known to many Italians as a hub for alternative, electronic, and rock music. The Estragon and the Link usually have concerts or festivals.

Known as the food capital of Italy, it can be hard to decide where to eat, as there are so many options. Proper Italian food usually consists of pizza and pasta with delicious meats, cheeses, and vegetables. Trattoria Del Rosso is a wonderful place to try as it serves many traditional dishes of Bologna. Enoteca Italiana has been voted the best in Italy for sandwiches and wine. For a laid back, home style meal head to Da Gianni. For more of an upscale meal and beautiful terrace to sit on, Zanarini is your best option.

The closest airport to Bologna is Guglielmo Marconi International Airport, which is only a few minutes away from the city center. From the airport, you can take a taxi for about fifteen euros or you can take the Aerobus for six euros. You can also take a train to Bologna from the other major cities in Italy and outside of Italy.

Getting around the city is best done on foot or bike. The signage in the city is very clear, making it easy to navigate. There are bike trails on the side of the road as well, which is ideal, as sometimes the streets can get crowded with scooters.