How much does it cost to travel to Bari?

How much money will you need for your trip to Bari? You should plan to spend around €91 ($96) per day on your vacation in Bari, which is the average daily price based on the expenses of other visitors. Past travelers have spent, on average, €26 ($27) on meals for one day and €9.18 ($9.68) on local transportation. Also, the average hotel price in Bari for a couple is €117 ($123). So, a trip to Bari for two people for one week costs on average €1,271 ($1,340). All of these average travel prices have been collected from other travelers to help you plan your own travel budget.

A vacation to Bari for one week usually costs around €636 for one person. So, a trip to Bari for two people costs around €1,271 for one week. A trip for two weeks for two people costs €2,542 in Bari. If you're traveling as a family of three or four people, the price person often goes down because kid's tickets are cheaper and hotel rooms can be shared. If you travel slower over a longer period of time then your daily budget will also go down. Two people traveling together for one month in Bari can often have a lower daily budget per person than one person traveling alone for one week.


How expensive is Bari? How much money do I need for Bari?

How much does a trip to Bari cost? Is Bari expensive? The average Bari trip cost is broken down by category here. All of these Bari prices are calculated from the budgets of real travelers.

How much do vacation rentals cost in Bari? Prices vary by location, date, size of the place, and the level of luxury. See below for options.

How much does it cost to go to Bari? Naturally, it depends on the dates. We recommend Kayak because they can find the best deals across all airlines.

The price of renting a car in Bari will depends on dates, the type of car, the location, and your age. We recommend Kayak because they can find the best deals across all car rental companies.

What did other people spend on Transportation in Bari?

Typical prices for Transportation in Bari are listed below. These actual costs are from real travelers and can give you an idea of the prices in Bari, but your costs will vary based on your travel style.

What did other people spend on Food in Bari?

Typical prices for Food in Bari are listed below. These actual costs are from real travelers and can give you an idea of the prices in Bari, but your costs will vary based on your travel style.

What did other people spend on Alcohol in Bari?

Typical prices for Alcohol in Bari are listed below. These actual costs are from real travelers and can give you an idea of the prices in Bari, but your costs will vary based on your travel style.

Affordable Hostels and Bed and Breakfasts in Bari, ItalyNaplesPalermoCataniaMessinaCagliari

Bari On a Budget 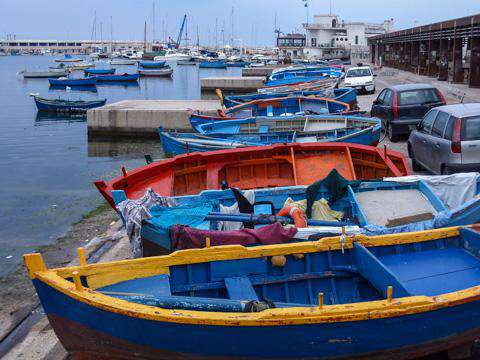 Bari, Italy
Off the lustrous, aquamarine waters of the Adriatic Sea, a bustling city hums to life as the sun sets. Though an ancient city, Bari still attains its youthful air, with a thriving nightlife and breathtaking boulevards. The capital city of Apulia region, Bari is the second most important economic center of mainland Southern Italy, as well as a significant port and university city. Despite this, Bari is on the list of Southern Italy's best off the beaten path locations, and is a must-see for everyone - even though it doesn't get as many visitors as Italy's more popular destinations.

To the north of Bari lays the old town, where the Basilica of Saint Nicholas, the Cathedral of San Sabino, and the Hohenstaufen Castle built for Frederick II can be found.

However, do not let its antiquated architecture fool you as this side of the town acquires a thriving nightlife. To the north of Bari, the more modernized area of the city resides, including a promenade on the sea as well as a major shopping district. Though not a popular tourist destination, Bari works as a hidden treasure trove for those that seek to uncover the culture and history of Southern Italy.

An iconic church and popular pilgrimage destination, the Basilica of Saint Nicholas is one of the top landmarks in Bari. Located only five minutes from the seaport and fifteen minutes from the train station, the Basilica houses the much treasured relics of Saint Nicholas. Brought over from Turkey (then Myra) around 1087, the relics have been celebrated with as much passion as Saint Nicholas himself. Saint Nicholas was known as a liberator of the innocent and philanthropist of the impoverished and was much revered throughout Myra and other locations. It is said by legend that after passing through Bari, Saint Nicholas deemed the city a worthy place of burial for himself. The Basilica was erected between 1087 and 1197 during the Italo-Norman domination. Some of the artworks the Basilica holds includes many noteworthy Romanesque sculptural works, mosaics, the tomb of Bona Sforza, and more. For more information on visiting the Basilica, be sure to consult their website for opening hours and ticket prices.

However, if you are looking to enjoy the beauty of the Italian countryside, feel free to visit outside Bari's urban borders to the National Park of Alta Murgia. Established in 2004, Alta Murgia became a protected natural area in order to preserve the unique and exquisite plant and animal species of the region. Covering about 68,033 hectares, Alta Murgia is one of the largest special protection areas and protects steppe grasses as well as the habitat of Lesser Kestrel Falco. There are many attractions within the Alta Murgia, including the world-renowned Castel de Monte, the Forest Mercadante, the Pulo of Altamara, and the Ravines. As the area is so expansive, the vegetation and wildlife change depending on what area in Alta Murgia you reside in. Some plant life include honeysuckle, hawthorn, butcher's broom, rock rose, and myrtle. Some animal life include falcons, barn owls, the yellow-bellied toad, and the four-lined snake.

With all this sightseeing, it is only natural to work up an appetite. Restaurant Biancofiore is a chic, quaint eatery that serves traditional Puglia cuisine. While most of the fish is prepared raw, Biancofiore ensures in providing its clients with the freshest ingredients and serving each meal in a gourmet style. Founded by Giacinto Fanelli, this star chef takes pride in providing his clientele with freshly caught blue fish as well as Puglia region vegetables. Some of the dishes include "cappellacci" (pasta) stuffed with "burrata" (cheese), cream of pumpkin, sage and crunchy capocollo, risotto "acquerello" with turnip greens, smoked "burratina" (cheese), tomato "confit" and garlic oil, "capunto" (pasta) with roasted eggplant cream, red prawns from Gallipoli, "ricotta" (cheese) and basil, and tubettone (pasta) with grouper, tomatoes, capers and toasted pine nuts.

If you are looking to rent a car in Bari, be sure to do so at the airport as many car rental services have limited hours and are usually closed on weekends. It is important to remember that unlike North America, it costs a great deal more to rent an automatic rather than a manual vehicle. However, unless you are looking to venture through the Italian countryside, it is strongly advised to make use of public transportation. There are also ferries that travel as far as Croatia and Greece. If you decide to take public transportation, consult Tempesta Autoservizi as they run local train and bus routes throughout the Puglia region.