How much does it cost to travel to Catania?

How much money will you need for your trip to Catania? You should plan to spend around €96 ($101) per day on your vacation in Catania, which is the average daily price based on the expenses of other visitors. Past travelers have spent, on average, €32 ($34) on meals for one day and €16 ($17) on local transportation. Also, the average hotel price in Catania for a couple is €103 ($109). So, a trip to Catania for two people for one week costs on average €1,347 ($1,417). All of these average travel prices have been collected from other travelers to help you plan your own travel budget.

A vacation to Catania for one week usually costs around €673 for one person. So, a trip to Catania for two people costs around €1,347 for one week. A trip for two weeks for two people costs €2,694 in Catania. If you're traveling as a family of three or four people, the price person often goes down because kid's tickets are cheaper and hotel rooms can be shared. If you travel slower over a longer period of time then your daily budget will also go down. Two people traveling together for one month in Catania can often have a lower daily budget per person than one person traveling alone for one week.


How expensive is Catania? How much money do I need for Catania?

How much does a trip to Catania cost? Is Catania expensive? The average Catania trip cost is broken down by category here. All of these Catania prices are calculated from the budgets of real travelers.

How much do vacation rentals cost in Catania? Prices vary by location, date, size of the place, and the level of luxury. See below for options.

How much does it cost to go to Catania? Naturally, it depends on the dates. We recommend Kayak because they can find the best deals across all airlines.

The price of renting a car in Catania will depends on dates, the type of car, the location, and your age. We recommend Kayak because they can find the best deals across all car rental companies.

Catania On a Budget 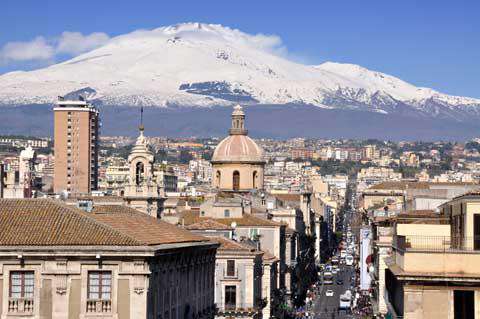 Catania and Mt. Etna
Located on the east coast of Sicily, Catania is at the base of Mount Etna, which is the largest volcano in Europe. It's also the island's second largest city and a major transportation center for the area. With almost one million residents in the metropolitan area, the city serves as an important economic base and university town for Sicily. It's a vibrant city with a young population, a lively downtown, and an excellent nightlife. The city has an abundance of Sicilian Baroque architecture and the downtown area, where much of it is this architecture is concentrated, has been declared a World Heritage Site.

The city dates back about 2700 years and has been ruled by a variety of cultures including the Greeks, Romans, Arabs, Normans, and Spanish. The city's large port made it a rich commercial center and beginning in the 1970's it began to thrive and grow economically as well. Despite it's significant growth, the old 17th century downtown area remains at the center of daily life.

The city's location at the foot of the biggest active volcano in Europe leaves it vulnerable to natural disaster. It has been destroyed many times in the past, and much of it's architecture has been rebuilt in a diversity of styles over the years. There are also many abandoned houses, particularly near the mountains.

There are many interesting sights in Catania. The baroque Piazza del Duomo is beautiful and where you will find the Elephant Fountain, which is the symbol of the city. Next to the piazza is the Norman Cathedral which is worth a visit. From there you can explore many food and fish markets that are lively and fun to get lost in. They also offer a glimpse into local culture. Via Etnea is the city's main shopping street, but it is also lined with many beautiful churches and impressive architecture. Piazza Stesicoro has some ruins for a Roman Amphitheater and also has the entry point to the main market. Teatro Massimo is a 19th century opera house that is a popular meeting point for young, local residents. Other sights include Castello Ursino, the Gree/Roman Theatre, Palazzo Bisari, the Villa Bellini, the Benedictine Monastery and the unfinished church of San Nicolo.

There are many different activities and festivals around town. St. Agata Festival is a three day long religious event that is dedicated to the Patron Saint of Catania. It is held the first week of February and can draw large crowds to the city in excess of 100,000 people. There are many firework displays, parades and street vendors set up. If you hope to be in town during this event then you need to book well in advance.

Another popular activity is to take a tour of Mount Etna. There are plenty of tour companies around town and they all generally have comparable rates. You can also make arrangements through most hotels and hostels.

You can enjoy some local food specialties at many of the great restaurants around town. Arancino is a rice croquette stuffed with a meat and tomato sauce filling. There are also some great fish dishes as well as the popular dish, pasta alla norma, which is made with macaroni and topped with tomato sauce and fried eggplant as well as basil and ricotta. Another unique option is horse meat, which the area is famous for. It's possible to find it in areas around the "Benedictine Monastery".

Popular breakfast dishes include "Granita" which is an almond or black mulberry sorbet that is served with a sweet round loaf called brioscia. It's particularly common during the warm summer months.

Cold paninis are common around town. You can choose whatever fillings you want. Popular options are proscuitto cotto/crudo and cheese. These are cheap sandwiches that make a good, quick meal or snack. Most shops close between the hours of 1 pm and 4 pm as well as Sunday afternoons. Other fast food options include tavola calda (or "hot bite") that is made with cheese and meat and then fried or baked.

You can arrive in Catania by bus, train, ferry or plane. The airport has both scheduled and chartered flights that travel throughout Italy and Europe. It is a half hour from the airport into the city by bus. Intercity buses connect Catania with Taormina, Messina, Enna, Caltanissetta, Ragusa and Syracuse. There are trains that run along the east coast to Taormina and Messina. Some trains continue on to Naples and Rome. It's also possible to catch buses to Enna, Palermo and Syracuse. You can also catch a ferry to mainland Italy.

If you're exploring the downtown area, it's easiest to just walk. While there is a metro line, you'll often find yourself frustrated with the long queues. Also watch out for pickpockets if you're on or around the public transit system, as they can be anywhere. If you want to head up Mount Etna, there's a private train line called Circumetnea that you can pick up at the Borgo metro station. From Rifugio Sapienza you can reach the top of the mountain and return to Catania all in one day.