A Travel Comparison for Vacations, Honeymoons, and Tours USA vs. China

Should you visit the USA or China?

China and the United States are often compared across the board on a number of different topics. Travel is one of these topics, and there are many similarities. Both countries are large and diverse when it comes to sights and activities. From big cities to beautiful natural scenery, both the U.S. and China have a lot to offer. But what may surprise many visitors to China is its relatively cheap price of travel.

If you're an American deciding whether you should travel internationally or domestically, then a large part of your decision may come down to cost. Surprisingly, if you travel independently abroad, it is often more affordable than traveling within the United States. Depending on where you go, you can often find cheaper accommodation, particularly if you're a budget traveler and willing to stay in hostels. Even if you want higher end accommodation, great deals are often available.

Which country is cheaper, China or USA?

Should I visit the USA or China? This is a popular question for many travelers. By figuring out which country is more expensive, you'll understand where you'll get more bang for your buck. A week in China can cost you about $479 (per person), while a week in the USA may cost you around $1,566. These differences become even more noticable if you plan to spend a longer time in the country. 10 days, two weeks, or even one month of travel to China or the USA can really add to your travel budget.

Accommodation is often cheaper in China compared to the USA ($30 vs. $102). Budget travelers usually stay in less expensive hostels and guest houses, while nicer hotels often appeal to families and upscale travelers.

Compare hostel, B&B, and guesthouse prices between China and the USA to find the cheapest accommodation here: China hostels and USA hostels.

When comparing food in the USA vs. China they are not just different in cuisine, but also in price. Meal and restaurant costs in the USA ($46) are often cheaper than China ($20).


How much are flights to the USA and China?


Find a Hostel in the USA or China

When is the best time to visit the USA and China? 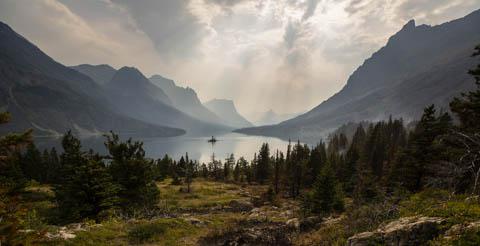 Glacier National Park, Montana
In many ways, the weather patterns of China and the U.S. are similar: cold winters in the northeast, warm weather in the south, and rugged terrain out west.

The United States is a vast country that covers a wide variety of landscapes and climates. You can really find somewhere to visit any time of the year.

Other than weather, the only thing to look out for are the holidays. During these times, in both countries, which usually last a weekend or a whole week, many people will be traveling to experience their own country's grand beauty. Expect hotels to be full and transportation to be crowded.

Why is the USA more expensive than China?

In general, the US is an expensive place to visit. The high cost of living and the vast size mean that transportation costs can be quite expensive. If you really want to see a lot of the country, flying is really your best option. Amtrak is the most well known train system, but it is limited to where it goes and prices are quite high. In some situations, flying is cheaper than taking the train. If you want to explore the country's impressive national park network, a rental car is a must. Public transportation throughout the nation is generally lacking compared to other countries.

China is a fairly affordable country to visit for a number of reasons. Although the economy is growing and the Chinese middle class is traveling more, competition for tourists and low wages are keeping travel prices lower than most developed nations.

A pro-business economy means that there are more hotels, restaurants, taxis, and attractions for you to visit, and all of the locals are essentially fighting for your attention and money. Budget hotels in China are growing by leaps and bounds, as local families and large companies open independent and chain hotels and restaurants. Generally, prices for hotels in China are cheaper due to the huge number of hostels and budget-friendly hotels throughout the country. While major cities have many hostels, even smaller cities and small towns are starting to jump on the hostel bandwagon, providing both dorms and private rooms for everyone from students to backpackers to families with kids.

What are the most expensive and cheapest cities and regions in the USA and China?

Xi'an, China
In the United States, the larger cities are some of the most expensive places to visit. New York City and San Francisco are notoriously expensive because of their high hotel costs and expensive restaurants. Still, there are plenty of affordable restaurants in these larger cities, so it is possible to save some money. Free entertainment in the larger cities can be common, and this can help you keep costs down.

Rural parts of the U.S. and smaller towns are generally cheaper than the big cities due to cheaper hotel costs and a plethora of inexpensive chain restaurants. Fast food is also ubiquitous, just don't expect a healthy meal.

How you can save money when visiting the USA and China?

Many larger cities in the US have cheap public transportation systems that can save you money. Consider this when you plan your trip, especially if you intend to rent a car for a portion of your trip. Likewise, China's network of trains between cities has grown lately, and high speed rail lines connect every major city in the east, as well as some in the west. Not only is it fast, but it's also affordable.

In the US, making reservations for hotels will usually save you money. Shop around for the best prices. 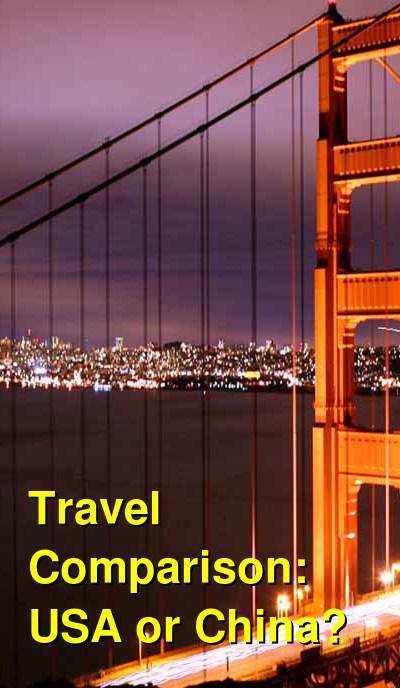