A Travel Price Comparison for Italy Verona vs. Bologna for Vacations, Tours, and Honeymoons

Should you visit Verona or Bologna?

Should I visit Verona or Bologna? This is a common question asked by many travelers. By figuring out which city has activities that align with your interests along with knowing which is more affordable, you'll understand where you can get more bang for your buck. So, let's dive into the details and the data, which all comes from actual travelers.

Verona, Italy is probably most famous as the setting for Shakespeare's famous play, Romeo and Juliet. It's in northeast Italy in the Veneto region, close to Venice. It's easy to make the trip by train from either Venice or Milan. Verona has many Roman ruins throughout town, most notably, the Arena. The Arena is a large amphitheater that dates back to the first century AD. You also can't visit Verona without stopping by Juliet's House on Via Cappello, just off the Piazza delle Erbe. The balcony is the supposed balcony that inspired the most famous love scene in the play. You can expect to find tourists gathered around with camera, perhaps detracting a little from what might have once been a romantic setting. Other sights in town worth visiting are the Castle Scaligeri, Castelvecchio, Lamberti Tower, Juliet's Tomb, and the small chapel San Giorgetta. If you have the time while you're in town, consider hoping on Bus 41 and heading out to S. Maria di Lourdes Sanctuary. From the edge of Verona's highest hill you can have a stunning view of the surrounding area. It's well worth the trip.

Which city is cheaper, Bologna or Verona?

The average daily cost (per person) in Verona is €134, while the average daily cost in Bologna is €141. These costs include accommodation (assuming double occupancy, so the traveler is sharing the room), food, transportation, and entertainment. While every person is different, these costs are an average of past travelers in each city. What follows is a categorical breakdown of travel costs for Verona and Bologna in more detail.

Below are a few samples from actual travelers for transportation costs in Verona:

Hired Cars and Shuttles in Verona

Also for Verona, here are a few examples of actual transportation services:

Is it cheaper to fly into Verona or Bologna?

Prices for flights to both Bologna and Verona change regularly based on dates and travel demand. We suggest you find the best prices for your next trip on Kayak, because you can compare the cost of flights across multiple airlines for your prefered dates.

Here are some examples of typical meal expenses from previous travelers to Verona:

For Verona, here are some samples of tours and activities related to meals and dining experiences:

For Verona, here are some examples of average entertainment and activity prices from previous travelers:

Tours and Activities in Verona

Also, here are some specific examples of entertainment, tickets, and activities for Verona.

Sample the Local Flavors in Verona

Also in Verona, these are the prices for nightlife and alcohol related activities from various tour providers:

When comparing the travel costs between Verona and Bologna, we can see that Bologna is more expensive. However, the two cities are actually relatively comparable in price, as the difference is somewhat minimal. Generally, this means that you could travel with generally the same travel style and level of luxury in each place. Since both cities are in Europe, it's no surprise that their costs are relatively close, as many destinations here have somewhat similar travel prices overall.

The Best Hostels in Verona for Students and BackpackersRomeMilanNaplesTurin (Torino)Palermo 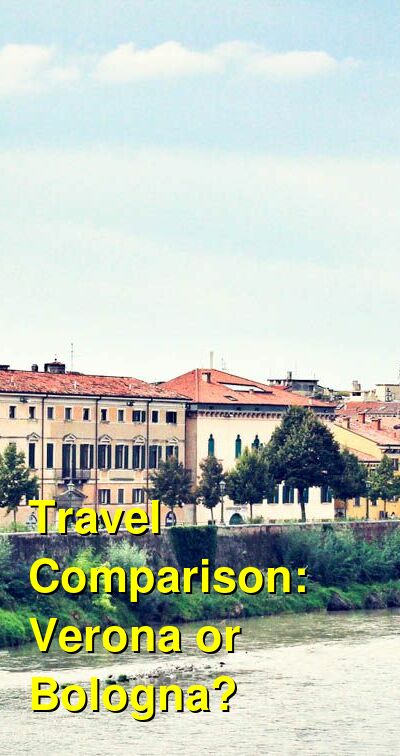