A Travel Price Comparison for Spain Zaragoza vs. Vitoria-Gasteiz for Vacations, Tours, and Honeymoons

Should you visit Zaragoza or Vitoria-Gasteiz?

If you're trying to decide where to visit between Zaragoza or Vitoria-Gasteiz, this travel cost comparison can help. The overall cost of travel is usually a consideration when deciding where to go next, and the cost comparison below can help you decide based on the average prices from other travelers along with your own travel budget.

In the midst of a vast, starry night, medieval cathedrals and ancient buildings are scattered with light across the humming city. This is none other than Vitoria-Gasteiz, a town located in the province of Araba/Alava in northern Spain. Within its border, this city contains Basque Country's House of Parliament, the headquarters of the Government, and the Lehendakari's (Prime Minister's) official residence. In 2012, Vitoria-Gasteiz was awarded the title of European Green Capital and now is one of the top five places to live in Spain. This multicultural city is chock full of amazing national history as well as unique cultural traditions. Vitoria-Gasteiz is also well known for its festivals, including Azkena rock festival, FesTVal, Vitoria-Gasteiz jazz festival, and the Virgen Blanca Festivities. Whether you seek to explore its world-renowned wineries or dine in a chic restaurant, Vitoria-Gasteiz holds an endless amount of possibilities.

Which city is cheaper, Vitoria-Gasteiz or Zaragoza?

The average daily cost (per person) in Zaragoza is €101, while the average daily cost in Vitoria-Gasteiz is €117. These costs include accommodation (assuming double occupancy, so the traveler is sharing the room), food, transportation, and entertainment. While every person is different, these costs are an average of past travelers in each city. Below is a breakdown of travel costs for Zaragoza and Vitoria-Gasteiz in more detail.

The prices for places to stay in Vitoria-Gasteiz can vary by date, location, and type. Generally, the average cost for accommodation per person is €55, while a typical double-occupancy hotel room for two people will cost around €110.

To get around in Vitoria-Gasteiz, the average visitor spends €27 per day, per person. This includes the costs of taxi rides and private drivers as well as public transportation, which tends to be much more affordable.

Hired Cars and Shuttles in Vitoria-Gasteiz

Also for Vitoria-Gasteiz, here are a few examples of actual transportation services:

Is it cheaper to fly into Zaragoza or Vitoria-Gasteiz?

Prices for flights to both Vitoria-Gasteiz and Zaragoza change regularly based on dates and travel demand. We suggest you find the best prices for your next trip on Kayak, because you can compare the cost of flights across multiple airlines for your prefered dates.

On average, meal and food prices in Vitoria-Gasteiz cost around €41 per person, per day. While this price can vary widely by location, the type of restaurant, and the amount of food ordered, a typical meal often costs around €16.

In Vitoria-Gasteiz, the costs for things to do, activities, admission tickets, and other sightseeing expenses are on average €29 per person, per day.

Tours and Activities in Vitoria-Gasteiz

Also, here are some specific examples of entertainment, tickets, and activities for Vitoria-Gasteiz.

Alcoholic beverages can often be a significant portion of a traveler's budget, and the costs can vary greatly from person to person. In Vitoria-Gasteiz, the average amount that a visitor spends on alcoholic beverages per day is €18.


Sample the Local Flavors in Vitoria-Gasteiz

Some specific costs for nightlife related activities in Vitoria-Gasteiz:

When comparing the travel costs between Zaragoza and Vitoria-Gasteiz, we can see that Vitoria-Gasteiz is more expensive. However, the two cities are actually relatively comparable in price, as the difference is somewhat minimal. Generally, this means that you could travel with generally the same travel style and level of luxury in each place. Since both cities are in Europe, it's no surprise that their costs are relatively close, as many destinations here have somewhat similar travel prices overall. 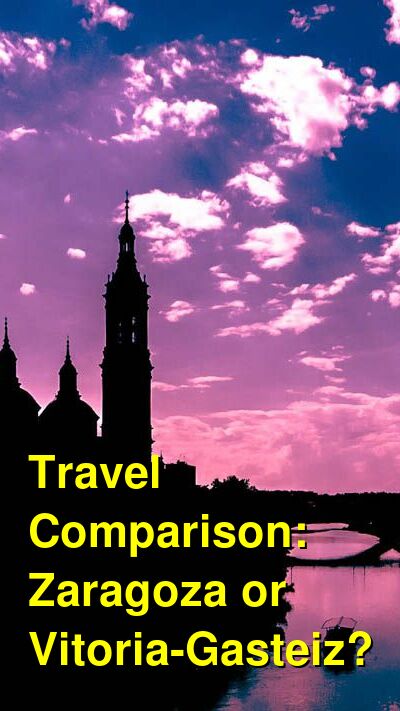