Things to See and Do in Venice

Europe / Italy / Northern Italy / Venice /
Venice has no shortage of places to explore and things to see. There are amazing museums, historic buildings, and an atmosphere that is like no other. Most visitors center themselves around San Marco Square and visit the main attractions in the area, but there are many other neighborhoods and sights that should not be missed.

At the heart of Venice's tourism scene is San Marcos Square. This area is where you'll find the highest concentration of tourists and at times the sheer number of people can get overwhelming. There are three major sights in this one square, and each is not to be missed. 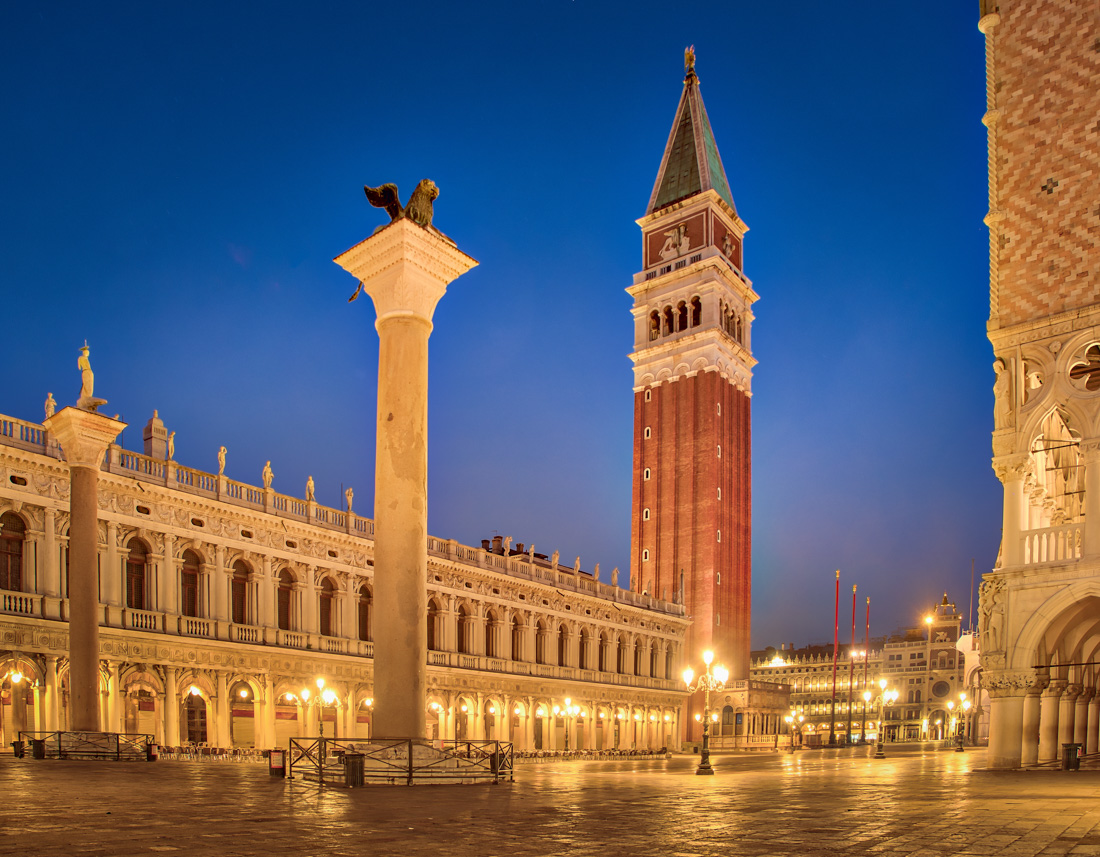 This cathedral is one of the most recognizable sights in Venice and one of the most famous representations of Italo-Byzantine architecture. It's located on the eastern side of the square. You can make reservations in advance for 3 euros if you want to avoid a long queue. https://www.venetoinside.com/attraction-tickets-in-veneto/tickets/skip-the-line-saint-marks-basilica/

If you'd like to take a guided tour, they're available inside the basilica's atrium to the right of the center doorway every day (except Sundays and holidays) at 11:00 am between the months of April and October. The tours are offered by the Tourism and Pilgrimages Pastoral Office of the Diocese of Venice along with the Prouratoria of St. Mark. If you have a large group, reservations are required. For more information, visit their website.

$95.30
Another major landmark in Venice, Doge's Palace was once the residence of the Doge of Venice. It first opened as a museum in 1923 and is built in the Venetian Gothic style.

The Palace can be accessed with a St Mark's Square Museums Ticket. This ticket offers combined access to Doge's Palace, Museo Correr, Museo Archeologico Nazionale and Monumental Rooms of the Biblioteca Nazionale Marciana. The ticket is valid for 3 months and offers a single entry into the palace. Price is 20 euros/ reduced 13 euros. Visit their website for more information. 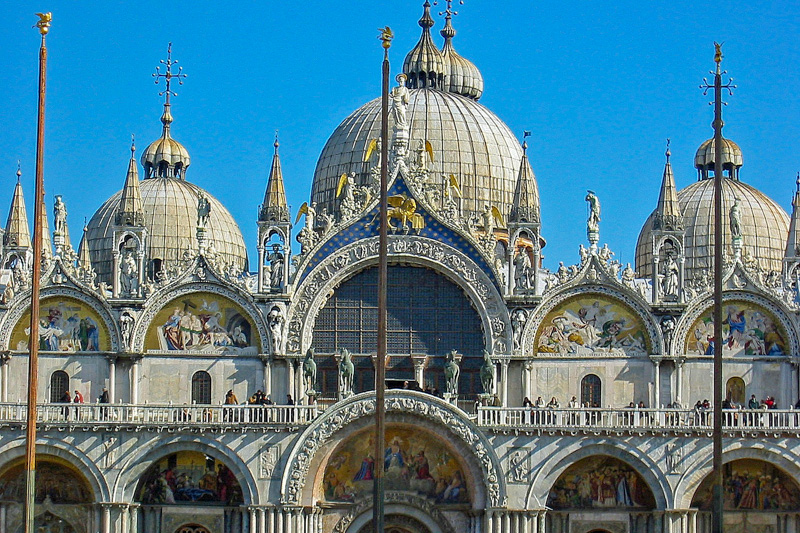 St Mark's Clocktower is located at the entrance to the Merceria. It's made up of the tower and two lower buildings, one on each side. The tower and its clock were built in the late 15th century (with updates later made to the clock).

You may visit the clock tower only if you book in advance. Tours last about an hour and cost 12 euros/ reduced 7 euros. More information is available on their website. 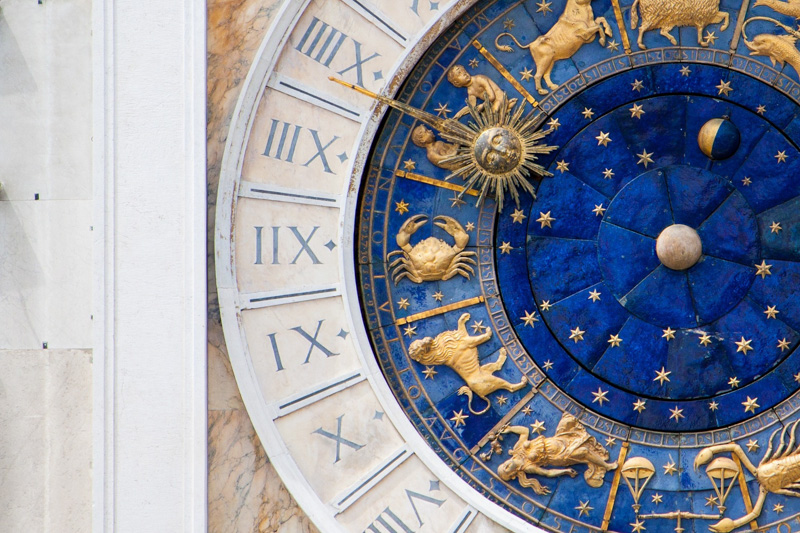 St Mark's Campanile is the famous bell tower of the St Mark's Basilica. This tower is a symbol of the city and one of the most popular and recognizable sights. It's 98.6 meters tall and is located at the corner of St Mark's Square in front of the basilica. It was completed in its current style in 1514 but reconstructed in 1912 after it collapsed in 1902. 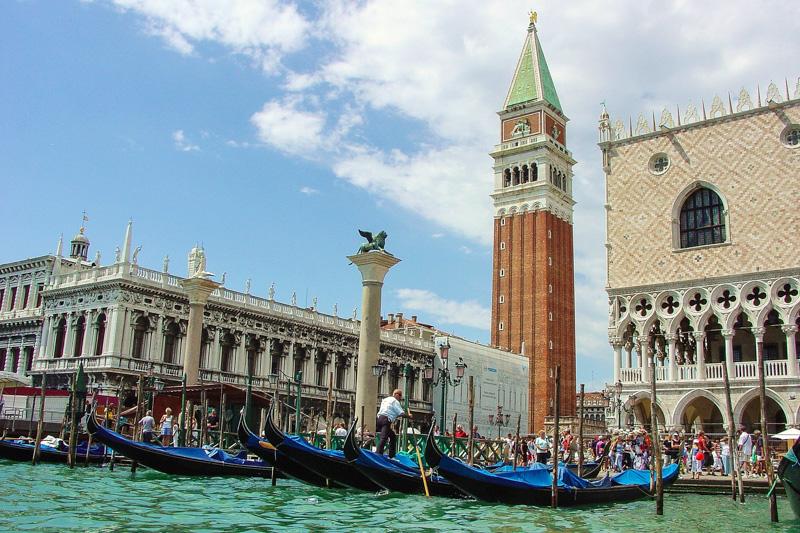 Outside of the San Marco Square area, you'll find these other popular sights. 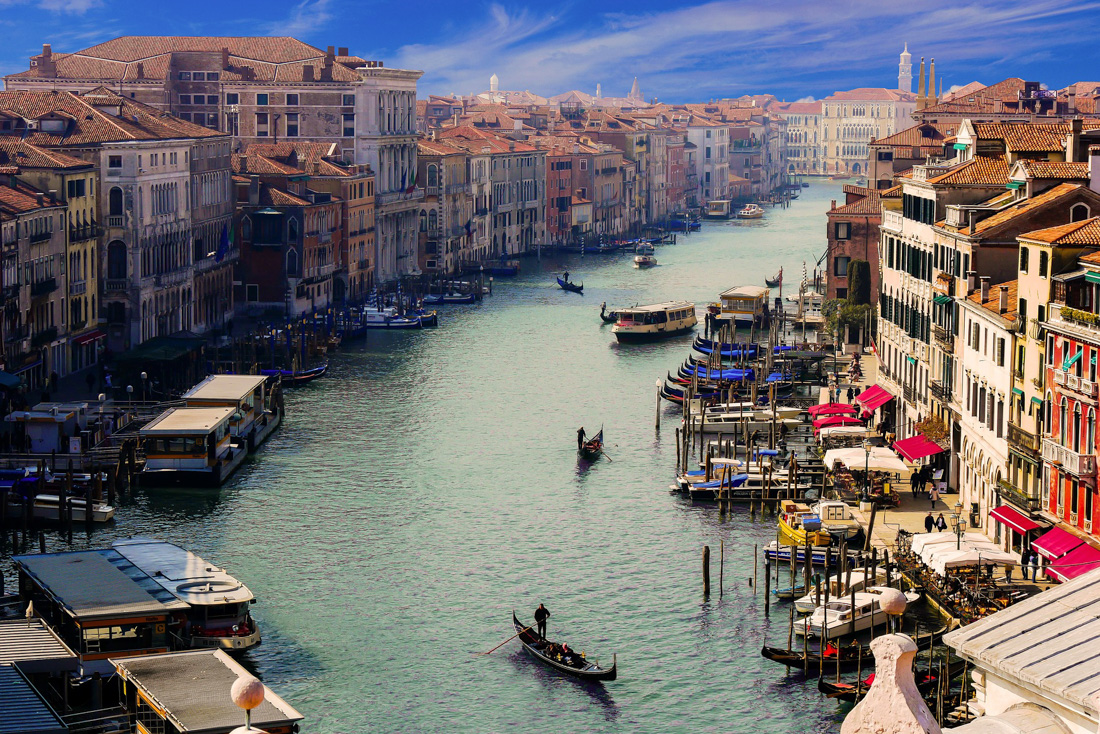 The Grand Canal is the Venice's major water corridor, which weaves through the middle of the city and supports all types of boat traffic. The canal runs for 3.8 kilometers from the lagoon near Santa Lucia railway station to the basin at San Marco Sestiere. 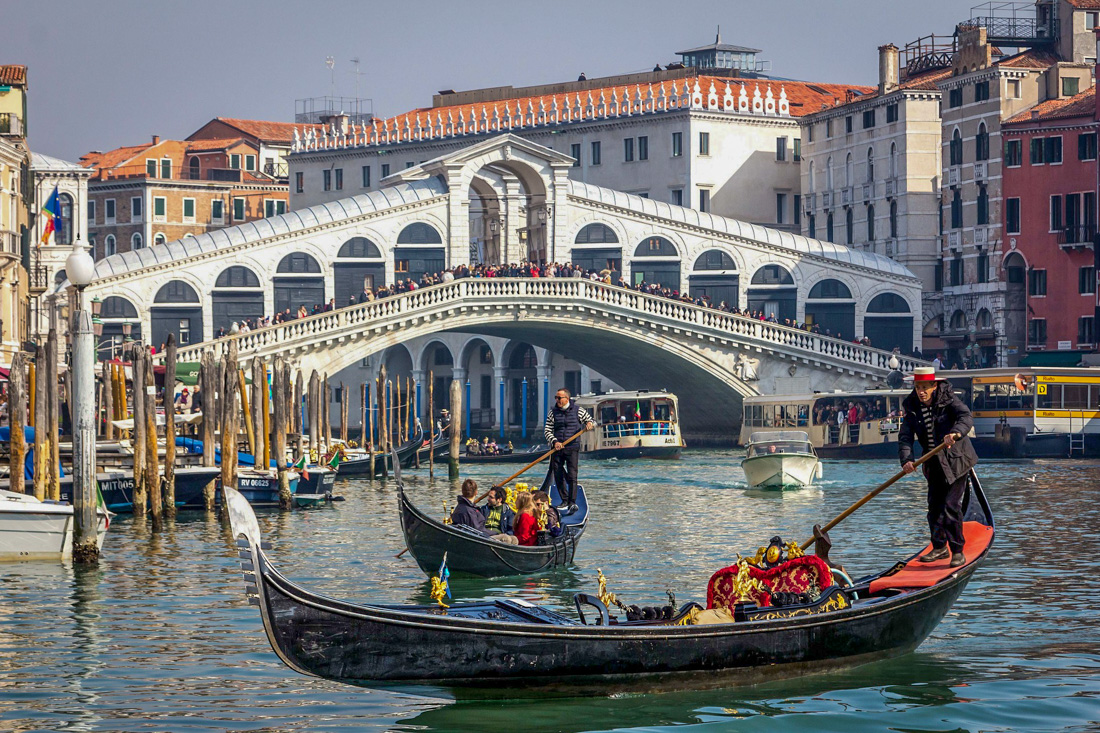 This is the oldest and most famous of the four bridges that cross the Grand Canal. It connects the San Marco sestiere to San Polo and was built in its current form between 1588 and 1591.

$14.75
This opera house is one of the most famous landmarks in Italian theater. It was burned to the ground in 1996 and has since been rebuilt. For ticket information visit their website.

This white limestone bridge crosses over the Rio di Palazzo, connecting interrogation rooms in Doge's Palace to the Prigioni, or prisons built during the 16th century. The bridge is enclosed and has windows with stone bars. The name comes from the idea that the prisoners "sighed" as the took in their final view of Venice before being imprisoned in their cells. 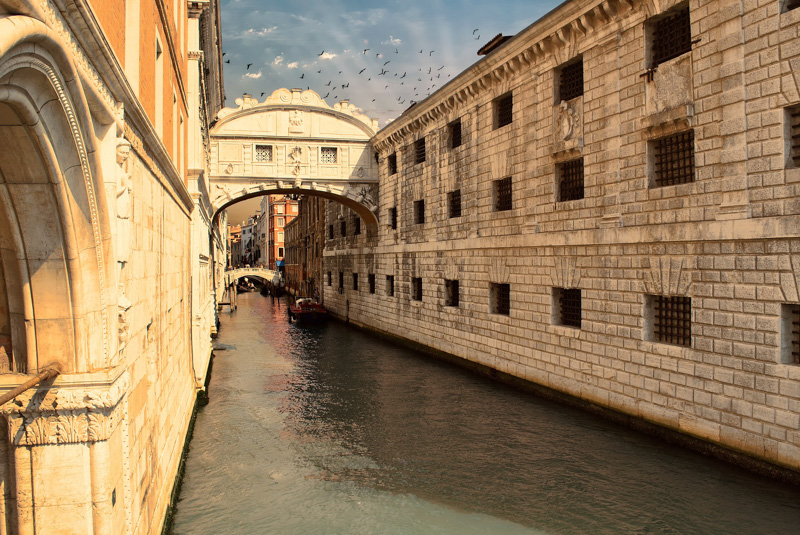 The museum is located in the Scuola della Carita on the south side of the Grand Canal in the Dorsoduro sestiere. It displays pre-19th century art and is 12 euros/ reduced price 6 euros. More information is available here.

This church, often referred to as Frari, is located in the San Polo sestiere and is one of the most notable churches in the city. Tickets are 3 euros/ reduced 1.5 euros. Visit their website here.

This is the oldest Jewish Ghetto in the world, dating back to March 29th, 1516. It was dissolved in 1797 by the French army of Italy under the command of General Napoleon Bonaparte.

$18.15
This museum has European and American art from the first half of the 20th century. It's found in the former home of Peggy Guggenheim, Palazzo Venier dei Leoni, on the Grand Canal. For more information, check out their website.

This museum is located on the south side of San Marcos Square on the upper floors of the Procuratorie Nuove. It has an impressive collection relating to the art and history of Venice.

The Museum can be accessed with a St Mark's Square Museums Ticket. This ticket offers combined access to Doge's Palace, Museo Correr, Museo Archeologico Nazionale and Monumental Rooms of the Biblioteca Nazionale Marciana. The ticket is valid for 3 months and offers a single entry into the palace. Price is 20 euros/ reduced price of 13 euros. The museum's website offers more detail.

Since 2005 this opera association has performed in the Palazzo Barbarigo Minotto, located on the Grand Canal. For details, go here.

The Best Day Trips from VeniceThe Ultimate Travel Planning Guide to VeniceGetting Around Venice: A Guide to the City's Transportation System 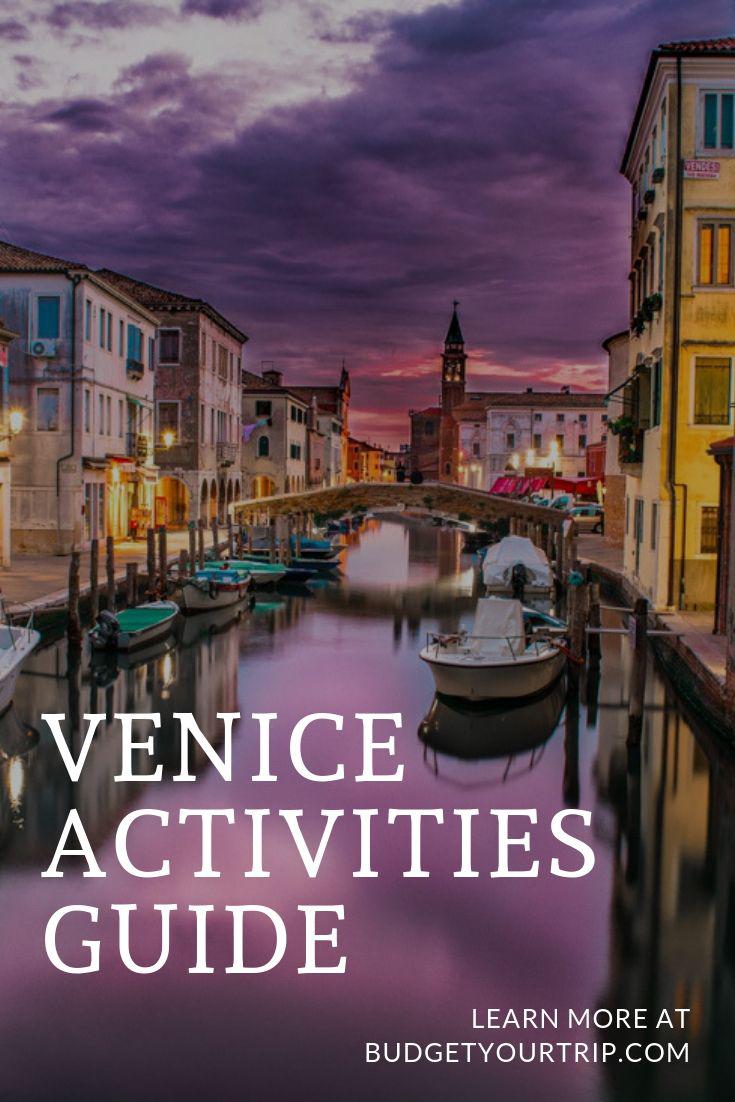