How much does it cost to travel to Campania?

How much money will you need for your trip to Campania? You should plan to spend around €129 ($153) per day on your vacation in Campania, which is the average daily price based on the expenses of other visitors. Past travelers have spent, on average, €33 ($40) on meals for one day and €19 ($23) on local transportation. Also, the average hotel price in Campania for a couple is €146 ($172). So, a trip to Campania for two people for one week costs on average €1,809 ($2,142). All of these average travel prices have been collected from other travelers to help you plan your own travel budget.

A vacation to Campania for one week usually costs around €904 for one person. So, a trip to Campania for two people costs around €1,809 for one week. A trip for two weeks for two people costs €3,618 in Campania. If you're traveling as a family of three or four people, the price person often goes down because kid's tickets are cheaper and hotel rooms can be shared. If you travel slower over a longer period of time then your daily budget will also go down. Two people traveling together for one month in Campania can often have a lower daily budget per person than one person traveling alone for one week.


How expensive is Campania? How much money do I need for Campania?

How much does a trip to Campania cost? Is Campania expensive? The average Campania trip cost is broken down by category here. All of these Campania prices are calculated from the budgets of real travelers.

Find a hostel, guesthouse, or B&B in Campania

How much does it cost to go to Campania? Naturally, it depends on the dates. We recommend SkyScanner or Kayak because they can find the best deals across all airlines.


Tips and Handouts Budget in Campania

Campania On a Budget

Positano
Campania is the southwestern region of Italy encompassing the Amalfi coast, Naples, Salerno, Pompeii, and many more of the most popular destinations in Italy. A rugged and mountainous region, Campania is known for its beautiful yet expensive coastline with clear blue water, amazing food, and rich cultural history. Agriculture is one of the main industries in the region, and lemons grow in abundance. Limoncello and Crema di limone have become very popular and tasty drinks for locals and tourists alike. The Amalfi coast is perhaps the most highly regarded area for tourists, although other nearby areas host similar experiences for a much lower cost. The coastline around Naples, for example, tends to be cheaper. The islands of Capri and Ischia offer unique and stunning resort-like atmospheres with an Italian feel, but for a hefty price. Outside of Naples, visitors can find Pompeii and Herculaneum, ancient archeological sites made famous by their "frozen in time" remains from the eruption of Mt. Vesuvius in 79 A.D.

Most people who visit Campania come for the coastline. It's a dramatic and scenic coast with quaint villages, beautiful islands, and delicous food. Perhaps the most famous area in Campania is the Amalfi coast where there are a series of mountainside villages that are perched on the edge of the sea. Other popular islands include Ischia, Procida, and the famed Capri. Also of great popularity is Pompeii. This world famous sight is where you will find the ruins of an ancient Roman city that was destroyed by an eruption by Mt. Vesuvius in AD 79. It has now been declared a UNESCO World Heritage Site.

Other sights include the ancient village of Calitri which is halfway between the ruins of Pompeii and the Amalfi coast. There you will find castles, aristocratic palazzos and many areas with a rich history and deep rooted tradition.

Campania covers an area of more than 13,000 square kilometers and has a coastline of 350 kilometers that runs along the Tyrrhenian Sea. It has many gulfs and three islands. Major cities in Campania include Naples, Amalfi, Positano, Salerno and Sorrento. Some of the most popular destinations include the Amalfi coast, Capri and Ischia, Calitri, Pompeii and Herculaneum and Cilento and Vallo di Diano National Park.

Many people who visit Campania spend their time exploring the coastline and wandering through the old villages. The views are breathtaking and the character of this area is not to be missed. There is also much history throughout Campania, particularly in the areas around Pompeii and the neighboring Herculaneum. Hiking and outdoor experiences are also available throughout the region.

As with most regions in Italy, food in Campania is unique, fresh, and an experience in and of itself. One of the most widely known items is Mozzarella di Bufala. Make sure you purchase the real deal, which has a wrapper that has the symbol of the protection consortium which guarantees that it is authentic and from local geographic origin. This mozzarella dates back to the 12th century and is made from water buffalo milk. It has a very delicate flavor and a firm, but slightly elastic consistency.

Another local specialty is, of course, pizza. Naples is the famed birthplace of pizza, where it was created in honor of Queen Margaret. Pizza in Naples is like no other. It is best to find a local restaurant and sample the best pizza around. It is made with simple but fresh ingredients and will not disappoint.

Campania has an efficient public transit system that is called Campania Unico. The tickets are based on a zone system that radiates out from Naples. Trains and buses link the major cities and smaller towns to Naples and Salerno, and onwards to Rome and other major cities throughout Italy. The Amalfi coast has an easy and cheap public bus system that runs along the steep shoreline through all of the small coastal towns. Consider taking this bus instead of hiring a car or booking a bus tour if you want more freedom to explore on a budget. The Circumvesuviana is a local private train that connects the area near Mount Vesuvius between Naples and Sorrento. It is one of your best options for travel between Pompeii, Herculaneum and Vesuvius. 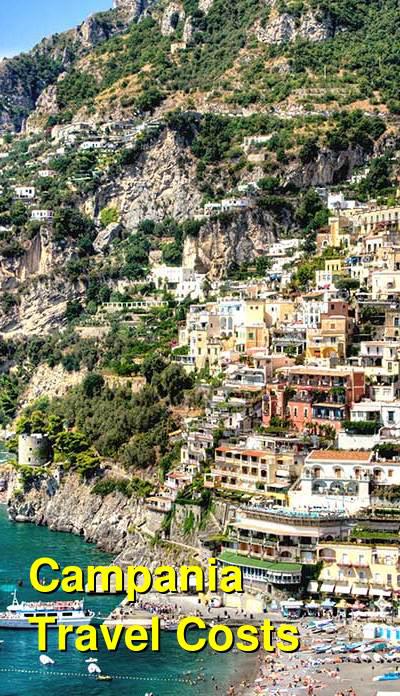