How much does it cost to travel to Pompeii?

How much money will you need for your trip to Pompeii? You should plan to spend around €121 ($117) per day on your vacation in Pompeii, which is the average daily price based on the expenses of other visitors. Past travelers have spent, on average, €28 ($27) on meals for one day and €43 ($42) on local transportation. Also, the average hotel price in Pompeii for a couple is €111 ($108). So, a trip to Pompeii for two people for one week costs on average €1,687 ($1,635). All of these average travel prices have been collected from other travelers to help you plan your own travel budget.

A vacation to Pompeii for one week usually costs around €844 for one person. So, a trip to Pompeii for two people costs around €1,687 for one week. A trip for two weeks for two people costs €3,375 in Pompeii. If you're traveling as a family of three or four people, the price person often goes down because kid's tickets are cheaper and hotel rooms can be shared. If you travel slower over a longer period of time then your daily budget will also go down. Two people traveling together for one month in Pompeii can often have a lower daily budget per person than one person traveling alone for one week.


How expensive is Pompeii? How much money do I need for Pompeii?

How much does a trip to Pompeii cost? Is Pompeii expensive? The average Pompeii trip cost is broken down by category here. All of these Pompeii prices are calculated from the budgets of real travelers.

Looking for a hotel in Pompeii? Prices vary by location, date, season, and the level of luxury. See below for options.

How much does it cost to go to Pompeii? Naturally, it depends on the dates. We recommend Kayak because they can find the best deals across all airlines.

The price of renting a car in Pompeii will depends on dates, the type of car, the location, and your age. We recommend Kayak because they can find the best deals across all car rental companies.

The Best Hostels and B&B's in Pompeii, ItalyTours of Pompeii from NaplesTours and Hiking Trips to Mt. Vesuvius and PompeiiNaplesSorrentoAmalfi

Pompeii On a Budget 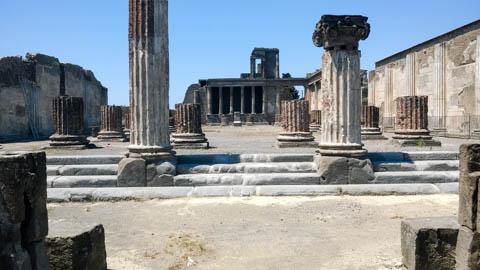 Pompeii, Italy
Pompeii was once a 160-acre Roman port city, called home by more than 20,000 residents. In 79 A.D., Mount Vesuvius erupted and after burying the entire city 16 feet deep in ash, the debris destroyed everything in its path, killing thousands of people and affecting more than 200 square miles around the area.

However, the phenomenon is that the ash preserved everything as it was in that time and to this day, you can visit and observe life as it was nearly two thousand years ago, as figures of people running from the explosion have been burned permanently into history.

The best time to visit Pompeii is during spring, after the rains of March and before the scorching heat of June and July. On the downside, this is the beginning of the busy season for tourists, so while you'll enjoy pleasant weather, you won't be likely to avoid crowds. Conversely, November starts the low-season for travel, so you can easily skip the crowds, though you may have to compromise on weather, as the rains return this time of year. Rain and crowds won't be an issue if you visit during winter, but be warned, temperatures drop down to the 50's during the day, accompanied by winds.

Expect to spend 15 Euro to enter the Pompeii Ruins. To get the most out of your visit, prepare to spend about 4-5 hours exploring the ruins and rent an audio guide. If you hire a guide, confirm the language of the tour and specify the duration and cost of the tour beforehand.

If you opt for a self-guided tour, don't leave without seeing the Forum, which was the city's cultural, political and religious center, the Macellum, which was the meat and fish market, the Terme Suburbane, and Lupanare, which were the baths and brothels, respectively, and the oldest amphitheater in the world, the Anfiteatro, built in 80 B.C. which Pompeiians gathered for gladiator tournaments and entertainment.

Before you go, make reservations in advance (arethusa.net) to see the Terme Suburbane, Casa del Menandro, and Casa degli Amorini Dorati, each of which are only open for restricted viewing.

About 400 yards from the main excavation site of Pompeii is the Villa dei Misteri,a UNESCO World Heritage site that most tours don't cover. Here you can see the famous frescoes and mosaics of the Dionysiac Mysteries, a prohibited but widespread cult at that time, dating to as far back as 50 B.C.

Outside of the ruins, visit the beautifully ornate Sanctuary of the Madonna of the Rosary in Piazza Bartolo Longo. Check out the architectures inside,especially that of the altars and the organ.

If you're feeling adventurous, take a day trip and wear your sturdy hiking shoes for a steep climb up Mt. Vesuvius that will be well worth the journey for the beautiful views of the gulf, Naples, Sorrento, and Capri.

There aren't many options for dining in the Pompeii Ruins, so it would be wise to pack your own snacks and water, especially since there is no re-entry into the site if you leave. However, if you plan to eat at the one and only restaurant in the site, Pompeii Scavi Cafe, be prepared for expensive prices, crowds, and waiting.

The eateries closer to the ruins play the same tune, catering to busloads of tourists and serving mediocre food, but if you're in a pinch, eating outside the ruins will cost less than inside. A ten-minute walk to the east on Via Plinio will take you to Hostaria Plinio, a reasonably-priced restaurant with excellent pizzas, pastas, and bruschettas with fresh delicious tomatoes.

Head toward the center of town for many more dining choices, with no shortage of delicious local cuisines. Cheap eats include the off-the-beaten-track Todisco, popular for its 6-euro pizzas, plates of mixed antipasti, and home-brewed beer. Peluso & Miranda is said to be the best pasticceria in Pompeii; stop by for their specialties, panna cotta, Goccia d'Oro, and Vesuvio, along with a cup of espresso.

For a finer dining experience featuring traditional Pompeiian dishes, Il Principe Restaurant is a shining beacon of gastronomy with beautiful ambiance. While the prices may be steep, the delicious food, excellent service and prime location in the main square are sure to indulge you with a luxurious experience.

To get to Pompeii, take a train or hire your own private car.

As far as the railways go, there are two main Circumvesuviana stations. The first is served by the Naples-Sorrento train, which stops at Pompei Scavi-Villa dei Misteri and is closer to the ticket office. The second is served by the Naples-Poggiomarino train, which stops at Pompei Santuario and is closer to the amphitheater and modern town center.

If you choose to drive to Pompeii, take the A3 Napoli-Salerno exit to Pompeii and follow signs which read "Scavi," (Italian for "ruins" or "excavations").

If you plan to visit Mount Vesuvius by car, take the A3 Napoli-Salerno exit Torre delGreco to Via E. De Nicola, then follow signs for Parco Nazionale del Vesuvio. The Vesuvio Express minibuses run from the Ercolano Circumvesuviana train station to the parking lot and starting point to climb up to the volcano.

For even more information, and a more detailed overview of what to expect, check out this great guide to visiting Pompeii.