How much does it cost to travel to Albufeira?

How much money will you need for your trip to Albufeira? You should plan to spend around €371 ($440) per day on your vacation in Albufeira, which is the average daily price based on the expenses of other visitors. Past travelers have spent, on average, €154 ($183) on meals for one day. Also, the average hotel price in Albufeira for a couple is €434 ($513). So, a trip to Albufeira for two people for one week costs on average €5,201 ($6,153). All of these average travel prices have been collected from other travelers to help you plan your own travel budget.

A vacation to Albufeira for one week usually costs around €2,600 for one person. So, a trip to Albufeira for two people costs around €5,201 for one week. A trip for two weeks for two people costs €10,402 in Albufeira. If you're traveling as a family of three or four people, the price person often goes down because kid's tickets are cheaper and hotel rooms can be shared. If you travel slower over a longer period of time then your daily budget will also go down. Two people traveling together for one month in Albufeira can often have a lower daily budget per person than one person traveling alone for one week.


How expensive is Albufeira? How much money do I need for Albufeira?

How much does a trip to Albufeira cost? Is Albufeira expensive? The average Albufeira trip cost is broken down by category here. All of these Albufeira prices are calculated from the budgets of real travelers.

Find a hostel, guesthouse, or B&B in Albufeira

Albufeira On a Budget

Albufeira, Portugal
Located in the Algarve region in the south of Portugal, Albufeira was once a small fishing village which has since evolved into a popular destination for tourists attracted by the area's beaches, pleasant climate, and fresh seafood.

The beaches of Albufeira are the main attractions to the area. Two popular beaches include the Praia do Tunel and Praia dos Pescadores, which are connected. Beachgoers can access Praia do Tunel via a manmade tunnel carved into the cliffs, while Praia dos Pescadores is reached by escalators that descend from the cliffs. There is also a boarded walkway which runs the length of both beaches as well as a selection of beachside bars and restaurants.

Another nearby attraction, popular with families, is Zoomarine - a marine park which features dolphins, marine life, and tropical birds. Within the park there is a wide selection of activities including dolphin shows, aquariums, as well as an excellent water park with slides, wave pools, and rapids. There is also a complex for go karting in town, as well as a park in the forests east of Albufeira with opportunities for high ropes and bridges of all difficulties. It is called Luso Aventura.

Albufeira descends from a long history of Roman villas and medieval castles, all which have since disappeared. The historic Old Town part of the city, however, offers a glimpse into that past with winding avenues and narrow alleyways. Along these ancient streets are plenty of restaurants and outdoor cafes where visitors often relax sipping an afternoon cup of coffee or evening glass of wine. It is also common for live bands to perform both inside and outside, adding another kind of life to the historic Old Town. A center piece of this area is the old clock tower, built on the site of an old castle gate, which chimes every hour. From Albufeira, visitors can also take day trips to the surroundings towns for a quieter look into traditional life away from the bustle of beachgoers. Most of these towns can be easily reached by public transportation, allowing for access to places like the traditional town of Silves, the ancient capital of the Algarve.

Along the beach, activities range from sunbathing and swimming to water sports like jet skiing, banana boating, kayaking, and parasailing. There are also a number of excellent boat tours that depart from the marina which include excursions like deep sea fishing trips, coastal tours, dolphin watching trips, and party boats. In the evenings, there are plenty of great places to experience the nightlife. Old Town features a family-friendly holiday environment with live music and casual drinks, while another area called the Strip offers drinking and dancing bars which run all night long. For those who seek more than beaches and bars, it is also possible to make easy day trips to any of the surrounding towns, some of which include the ancient capital of Silves, the historic but modern capital of Faro, and the charming market town of Loule.

Another terrific place to visit nearby is the Benagil Sea Cave, which is located to the west of Albufeira, about halfway to Portimao.

The traditional food of Albufeira is that typical of the Algarve region, the southernmost area of Portugal. A strip of land which hugs the coast, this region is best known for its seafood dishes. Sardines are particularly famous in Algarve, often grilled and served with boiled potatoes and salad. A more traditional way to enjoy the dish is to have the sardine on a slice of local bread which soaks up the oils of the fish. Shellfish are also common and often cooked with whole cloves of garlic, fried in oil and butter. Another method of cooking is the "cataplana" - a clam-shaped pot with a lid, usually made from brass or copper, which is used to slow cook anything from fish or shellfish to meat and served right out of the pot. Local stews are also very popular as is a regional dish called chicken piri piri, where the meat is cooked in a hot and spicy sauce. For the best quality food, choose restaurants further inland from the beaches. Old Town will have plenty of options for all tastes and budgets.

The nearest major airport is in Faro, Faro Airport a.k.a. Algarve Airport, located about 50 kilometers from Albufeira. It has both domestic and several international routes from across Europe, with most arriving from the UK and Ireland, mainland Europe, and Canada. From Faro, the train will offer transportation to Albufeira.

The train station in Albufeira (with a line that runs between Albufeira and Ferreiras) is about 6 kilometers from the town center. From the station there is a city bus for transportation directly into town. Long distances buses are also available from the city center. 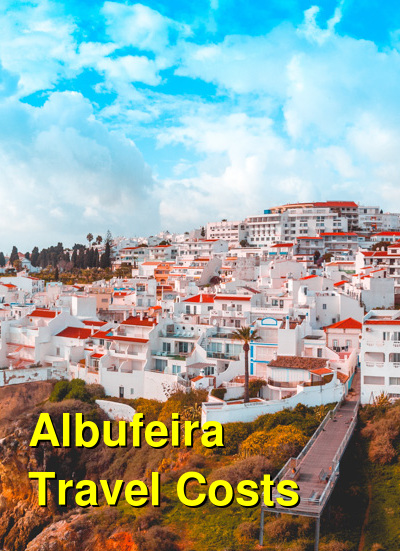