How much does it cost to travel to Istanbul?

How much money will you need for your trip to Istanbul? You should plan to spend around TRY189 ($25) per day on your vacation in Istanbul, which is the average daily price based on the expenses of other visitors. Past travelers have spent, on average, TRY35 ($4.65) on meals for one day and TRY15 ($2.05) on local transportation. Also, the average hotel price in Istanbul for a couple is TRY263 ($35). So, a trip to Istanbul for two people for one week costs on average TRY2,649 ($356). All of these average travel prices have been collected from other travelers to help you plan your own travel budget.

A vacation to Istanbul for one week usually costs around TRY1,324 for one person. So, a trip to Istanbul for two people costs around TRY2,649 for one week. A trip for two weeks for two people costs TRY5,297 in Istanbul. If you're traveling as a family of three or four people, the price person often goes down because kid's tickets are cheaper and hotel rooms can be shared. If you travel slower over a longer period of time then your daily budget will also go down. Two people traveling together for one month in Istanbul can often have a lower daily budget per person than one person traveling alone for one week.


How expensive is Istanbul? How much money do I need for Istanbul?

How much does a trip to Istanbul cost? Is Istanbul expensive? The average Istanbul trip cost is broken down by category here. All of these Istanbul prices are calculated from the budgets of real travelers.

Find a hostel, guesthouse, or B&B in Istanbul

What did other people spend on Food in Istanbul?

Typical prices for Food in Istanbul are listed below. These actual costs are from real travelers and can give you an idea of the prices in Istanbul, but your costs will vary based on your travel style.

How much does it cost to go to Istanbul? Naturally, it depends on the dates. We recommend SkyScanner because they can find the best deals across all airlines.

The price of renting a car in Istanbul will depends on dates, the type of car, the location, and your age. We recommend SkyScanner because they can find the best deals across all car rental companies.


What did other people spend on Transportation in Istanbul?

Typical prices for Transportation in Istanbul are listed below. These actual costs are from real travelers and can give you an idea of the prices in Istanbul, but your costs will vary based on your travel style.

What did other people spend on Entertainment in Istanbul?

Typical prices for Entertainment in Istanbul are listed below. These actual costs are from real travelers and can give you an idea of the prices in Istanbul, but your costs will vary based on your travel style.

Tips and Handouts Budget in Istanbul

Istanbul On a Budget

Istanbul
Istanbul is strategically located on the Bosphorus and is split between Europe and Asia. It truly is a city where east meets west. Istanbul is the cultural and financial hub of Turkey, and also the most populous city. The sites are countless and there's something for everybody, whether you're interested in art, music, food, or adventure. You can pass many days exploring both the residential and commercial pockets of this city. Much of the appeal is hidden away along back alleys or within corner shops.

The climate in Istanbul is temperate oceanic. The summers are hot and humid and the winters are cold and wet, with occasional snowfalls. There is a surprisingly high amount of rain in the city, more than that of London, Dublin, or Brussels. Rain is most common during the late fall and winter months. Spring and summer are the driest times of year, although there is no time that is considered a "dry" season. Summer months can be quite hot with average temperatures around 27 degrees during the day. Humidity makes it feel even hotter. Winter is cold and damp with temperatures reaching 7 degrees Celsius during the day.

Many of Istanbul's historic sights are found in Sultanahmet. These include the Hagia Sophia, Topkapi Palace, the Blue Mosque, and Basilica Cistern. Outside of this neighborhood there is also the Church of St. Savior in Chora, the Galata Tower, and the Galata Whirling Dervish Hall.

The Grand Bazaar is nearby, too. You shouldn't miss it, as this is a great place to go shopping in Istanbul. Even if you don't buy anything, it's a destination itself with plenty of cultural experiences.

Elsewhere in the city you can find other mosques open to the public, as well as tours and trips up the Bosphorus. For more details and ideas about what to do if you're in Istanbul for just a short time, check out this guide to visiting Istanbul in one day on a layover.

Sultanahmet is the Old City in Istanbul. This is where you will find most of the historic sights including the Blue Mosque and Hagia Sophia. The New City is the main business center and has a much more modern atmosphere. There are many shopping areas and popular districts such as Elmadag, Nisantasi and Etiler. The Bosphorus is lined with beautiful palaces, parks, and mansions. Along the Bosphorus there are popular areas such as Besiktas and Ortakoy. Other neighborhoods include the Golden Horn, where you'll find Eyup, and Princes' Islands, which offers a wonderful retreat from the hustle and bustle of the city.

Hamams, or Turkish Baths, are great places to visit while you're in Istanbul. Most neighborhoods have at least one Hamam, but they each vary in cleanliness and quality, so ask around for a recommendation.

Another popular activity is smoking a hooka, or water pipe. There are a good number of places near the Grand Bazaar where you can smoke a hooka.

A Bosphorous Cruise is another great activity.The best option is to take the cruise offered by the state run company Sehir Hatlari. The cruise is 90 minutes each way or you can take a 2 hour non-stop cruise. During the peak season there are three daily departures, but it is still best to arrive early. You can buy tickets near the Eminonu terminal just east of the Galata Bridge.

And if you're looking for even more activities, check out this great 4-day itinerary for Istanbul which covers plenty of things to do.

As you walk around Istanbul, restaurant employees will do their best to persuade you to come into their restaurant. This is particularly true in the touristy areas. They are generally friendly and welcoming, so a smile as you decline can go a long way. If you're trying to figure out where to eat in Istanbul, there are plenty of affordable restaurants and fast food options in the city. Many of the restaurants in Sultanahmet are geared towards tourists. Taksim has some wonderful restaurants that are upscale in style but still reasonably price. Affordable food options include doner, hamsi and kumpir. Pastry shops are spread throughout the city and have some very delicious desserts that are reasonably priced. Look for one with a rooftop patio so you can enjoy a view of the city at night.

Although the public transportation system can seem chaotic, it is the best way to travel around the city, particularly when you're on a tight budget. The light rail system has four underground metro lines, four Tramvays, which are aboveground, two Funikulers, two mini-lines, and the Marmaray, or underwater lines. There are also ferries that travel the Bosphorus frequently. The above ground trams must deal with traffic, so they can be frustratingly slow, particularly during rush hour. If you're hoping to explore the Bosphorus, just hop on one of the ferries. These are cheap and efficient, and far more affordable than any private tour that is available.

Private dolmus minivans also follow set routes and offer a good option late at night. They are not on a set schedule but instead wait to fill up before departing. They do run through the night, unlike the public transportation system. 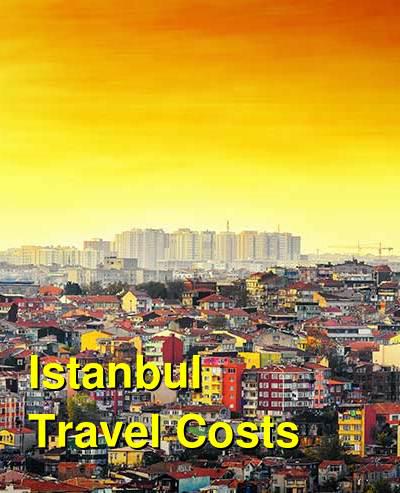 By wanderinggurl in Entertainment
Catch the public ferry for about US$8 and ride it along the Bosphorus. Don't worry about booking in advance through a travel agency. You can take the public buses back and visit some of the towns or ride the ferry round trip all the way back to Istanbul. It's a beautiful and fun trip.

Save on guides and audio guides!

By lily in All Inclusive Tour or Cruise
Save on guided tours by opting for an audio guide instead and sharing it with your travel partner.

Audio guides are available for all major attractions in Turkey at the cost of 10-30 TL. Bring shareable headphones, or better yet! Bring a headphone jack splitter. You can then share the same audio guide and have the benefit of hearing the same thing at the same time as your friend.