How much does it cost to travel to Olympos?

How much money will you need for your trip to Olympos? You should plan to spend around TRY490 ($26) per day on your vacation in Olympos, which is the average daily price based on the expenses of other visitors. Past travelers have spent, on average, TRY192 ($10) on meals for one day and TRY78 ($4.18) on local transportation. Also, the average hotel price in Olympos for a couple is TRY433 ($23). So, a trip to Olympos for two people for one week costs on average TRY6,859 ($369). All of these average travel prices have been collected from other travelers to help you plan your own travel budget.

A vacation to Olympos for one week usually costs around TRY3,430 for one person. So, a trip to Olympos for two people costs around TRY6,859 for one week. A trip for two weeks for two people costs TRY13,719 in Olympos. If you're traveling as a family of three or four people, the price person often goes down because kid's tickets are cheaper and hotel rooms can be shared. If you travel slower over a longer period of time then your daily budget will also go down. Two people traveling together for one month in Olympos can often have a lower daily budget per person than one person traveling alone for one week.


How expensive is Olympos? How much money do I need for Olympos?

How much does a trip to Olympos cost? Is Olympos expensive? The average Olympos trip cost is broken down by category here. All of these Olympos prices are calculated from the budgets of real travelers.

Looking for a hotel in Olympos? Prices vary by location, date, season, and the level of luxury. See below for options.

How much does it cost to go to Olympos? Naturally, it depends on the dates. We recommend Kayak because they can find the best deals across all airlines.

The price of renting a car in Olympos will depends on dates, the type of car, the location, and your age. We recommend Kayak because they can find the best deals across all car rental companies.

The Best Hostels and Tree Houses in Olympos (Blue Cruise)AntalyaIstanbulAnkaraIzmirDiyarbakir

Olympos On a Budget 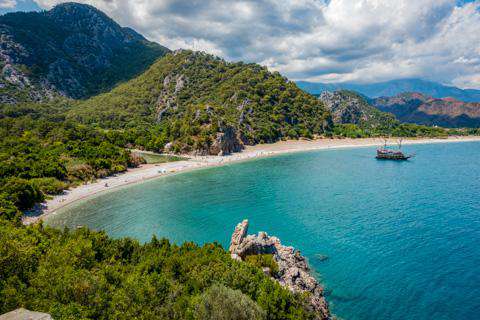 Olympos, Turkey
Olympos was an ancient city in Lycia, situated in a river valley near the coast. Its ruins are located south of the modern town Cirali in the Kumluca district of Antalya Province, Turkey. An important Lycian city in the 2nd century BC, Olympos is more famous these days for being the beach resort of choice for backpackers. Staying in an Olympos 'tree house' at one of the dozen-or-so camps that line the path to the ruins and beach has long been the stuff of travel legend. The former hippy-trail hot-spot has been considerably renovated in past years and during summer can be pretty overcrowded. Olympos offers good value and an up-for-it party atmosphere in a lovely setting.

The Ancient Ruins of Olympos are by far the most popular sight here. It is a marvelous collection of ancient ruins dotted along the jagged coastline. The ruins of the ancient city of Olympos, enshrouded in dense vegetation, have received little excavation and, as a result, are wonderfully atmospheric. Their location next to a river and the shade provided by the surrounding tall firs, flowering oleander bushes, and a mountain gorge means they are also delightfully cool in summer, the perfect time to explore. Many tombs are scattered around the ancient city, which is reached by two parallel paths that continue down to the beach. In the center of the northern half of the site is the large cathedral complex, once the main temple, which includes a much-photographed 18-foot-high gate.

Other ruins and attractions in the area include the ancient city of Phaselis and the burning flames of Chimera. All these are situated with the National Protected Park of Beydaglari that provides many opportunities for nature lovers in the theme of hiking, bird watching and the impressive view from Mount Tahtali. The Antalya museum in the city center also displays ancient artifacts from Olympus.

The Chimera, the eternal flames on a rocky mountainside above Cirali village near Olympos, Turkey, is a fascinating natural phenomenon: about a dozen flames issue from a mass of rock with no apparent fuel to sustain them. The flames are burning a sort of methane gas that has been venting from the earth on this rocky slope for thousands of years. The flames are most dramatic at night, and luckily the forested park is open 24 hours a day, allowing visitors to hike the 2 miles uphill along a rough stone path to the Chimera anytime.

Olympos
Olympos itself mostly consists of the ruins and beach area. Olympos is very famous for the "treehouses" and offers a bit of a different lifestyle. It tends to cater to younger crowd, including backpackers, students, and budget accommodations. In Olympos there are more bars and discos, where as Cirali caters to a quieter crowd with only a few local bars playing live Turkish music.

Cirali
A short walk down the beach from Olympos, or a longer drive around the mountain, is the town of Cirali. It is quiet and peaceful village perfect for families, nature lovers and for those wishing to get away from the mass touristic cities or towns. The beach on this side is usually more quiet and calm, and there are more modern facilities than those in Olympos.

The Olympos beach is a spectacular adventure in itself. This 3-mile sweep of beach, with a line of fir trees behind it and a surrounding amphitheater of mountains (including the 8,000-foot peak of Mt. Olympos) is one of the wonders of Turkey. The surface here consists mostly of smooth white and multicolor pebbles mixed with some light gray sand, so prepare to recline on a lounger rather than a beach towel.

Most people come to relax and swim at the beach that fronts the ruins, but there are also numerous activities available from agencies and camps in Olympos, including boat cruises, canyoning, sea kayaking, paragliding, diving, mountain-biking trips, and rock climbing.

Turkish cuisine is one of the richest cuisines of the world. Olympos, as part of Antalya, enjoys an authentic cuisine which is a wonderful blend of the Arabic and Mediterranean influences. Fresh vegetables grow on the shoreline in some areas, but wheat and corn are most common. One can find all the cuisines of the world in Antalya hotels and restaurants. But some of the special foods of the region include: sac kavurma (meat), Tandir kebab(meat), Kolle (cooked by mixing different types of corn and fruit sprinkles - sugar added), and Tomato cive (cooked with tomato and wheat).

Antalay has its own airport, so you can fly in there to reach Olympos. Olympos is about 50-60 km south of Antalya. The nearest major towns are Kumluca to the south and Kemer to the north of Olympos. There are minibuses from Antalya's otogar (main station for intercity buses) as well as buses from Antalya to Kas, which stop at the junction on upland section of the main coastal highway of the region, which is about 10 km away from Olympos. From there a dolmus, which depart fairly frequent, can be take you the rest of the way. If you prefer more flexibility, you can also reach Olympos by rental car.