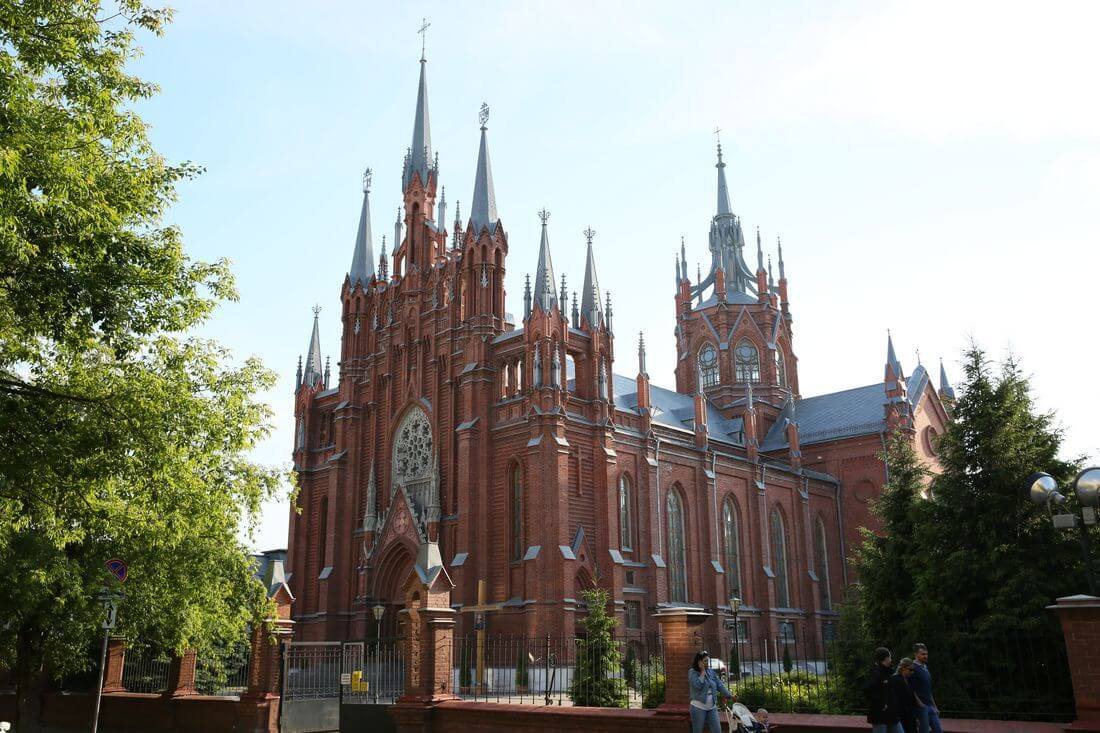 When it comes to visiting Moscow for the first time, you may discover a lot of controversial information about this great city. Starting from applying for a Russian visa (which can be very confusing) to dealing with Russia’s chilly winter weather, the country is full surprises and you never know what might happen and what you’re gonna get the next time you visit. While visiting Moscow, the complex history is palpable, but with lots of malls, restaurants, and bars all around, Moscow is rightfully considered a perfect destination for first-timers. As a Moscow local, having lived there full-time for almost a year, I’ve created this local guide with Moscow insider tips, ways to get around, food to try and where to stay.

Which Is the Best Airport to Fly into Moscow? 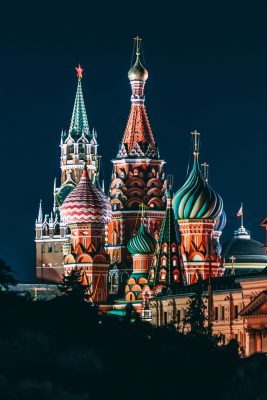 The Aeroexpress train is the fastest (and my favorite so far) way to reach Moscow city center from the main airports around the city. Trains run every 30 minutes between around 5 a.m. to 12 a.m. and cost $8 USD (500 RUB) one way. The express trains have plenty of advantages but with frequent heavy traffic in Moscow, this is the most convenient way to get to the city center at a predictable time.

If you travel on a tight budget, there is a good chance that you will want to save money on transportation. All Moscow airports are connected with the nearest subway station by buses. These are usually not that comfy but really cheap so you can travel for less than $3 USD one way. But keep in mind it may take some extra time to get from the outskirts of Moscow. Bus number 851 links Sheremetyevo airport with the Rechnoy Vokzal metro station, while bus number 308 links Domodedovo airport with the subway station stop with the eponymous name.

How To Travel Around Moscow

As a first-time and frugal visitor, the best thing to buy and don’t get confused is a Troika card. While Moscow’s public transportation and ticketing system can be difficult-to-comprehend at first, this reusable card allows you to use metro, buses, trams, and trolleybuses at discount rates and is a godsend when you don’t speak Russian. It works in a very straightforward way. Here are my other recommendations on how to save money while traveling in Europe.

You can get your Troika card valid for a month for less than $30 USD so don’t miss out on the opportunity to save money and avoid wasting time in line. If you’re travel in a group, Troika card is a great value for money since it is not personalized and can be used by everyone.

Taxis are readily available at airports, but I just hate riding a taxi around the city – chances are you will waste a lot of time sitting in traffic, and prices can fluctuate during rush hour and with distance. Über and Get Taxi are still the best options if you don’t speak Russian.

If you don’t feel like walking there are plenty of docking stations available throughout the city. You can take the bicycle from one location and return it to another. The only thing you need is to register on their website, receive your personal login information and that is it! You’re ready to explore the city by bike! Warning: bike culture is relatively new to Muscovites so I’d recommend avoiding streets with heavy traffic and opt for parks, narrow central streets, embankments and the Boulevard Ring.

Where to Stay in Moscow

When you’re planning your first visit to Moscow, you might find out there are literally thousands of places to stay. Accommodation in Moscow ranges from luxury hotels to budget hostels that often have both shared facilities and private rooms.

To reduce your living expenses I recommend using the Ostrovok hotel booking engine that might come in handy if you want to get better hotel rates than with Booking. As of mid-2018, the Russian ruble dropped 5% versus the dollar, thus making even luxury hotels in Moscow a more affordable option compared to similar hotels in the rest of Europe. If you’re looking for budget hotels in Moscow, I recommend 999 Gold Hotel and Orange Hotel near the Victory Park. AirBnB and Couchsurfing are popular while most of the hosts speak proper English.

You can easily find the world’s largest fast-food brands such as McDonald’s, Burger King, KFC and Subway in Moscow. But I bet you won’t want to hit international restaurants featuring everything from sushi (which many locals have adored for years) to burgers. Instead, I recommend hitting fast food restaurants offering blini (Russian pancakes), grechka (buckwheat porridge), pelmeni (dumplings), borsch (beetroot soup), and syrniki (fried quark pancakes). Some of the affordable yet decent food chains include Moo-Moo, Grabli, and Yolki-Palki.

If you’re looking for a bit different food experience, take a closer look at traditional dishes from Georgia, Uzbekistan, and the other former Soviet republics. In this case, I can’t recommend highly enough such brands as Jonjoli featuring Georgian food, Odessa-Mama with a wide array of dishes from Ukraine and Uryuk chain where you can find some of the best plov in Moscow.

Places To Visit in Moscow Beyond The Obvious

Aside from well-known attractions, Moscow has loads of places that are like hidden gems waiting to be discovered. With so many tourists visiting Moscow each year, only a small percentage of them actually make their way outside the Third Ring Road. Here are my suggestions for places to visit in Moscow if you want something other than the Kremlin and the Red Square.

A tranquil and charming neighborhood next to Mayakovaskaya Metro station has long been known as the area popular with expatriates. However, only a handful of travelers make their way here. I totally recommend visiting this charming park especially if you’re a Bulgakov fan. The area near the Patriarch Ponds was mentioned in the novel’s opening scene where the conversation between Berlioz, Ivan Bezdomny, and Woland has occurred.

If you’re looking for top things to do in Moscow in 7 days, I’ve got that covered!

The Cathedral of the Immaculate Conception

You can find this awe-inspiring Cathedral not far from Moscow Zoo and Embassy of Poland. In fact, this neo-Gothic Roman Catholic Church is one of the largest and most beautiful Catholic cathedrals in Russia. Built in the early 20th century, the building has had a fairly complicated history. It was shut down and suffered terrible damage from aerial bombings during the Second World War but was restored in 1990. Now you can attend one of the masses offered in a range of languages, enjoy classical music concerts free of charge in this lesser-known architectural gem.

This huge park is both an open-air museum and a UNESCO site and it is extremely popular with locals. Located in the southeast of Moscow, Kolomenskoe Park is home to a number of wooden structures from northern Russia and the hilltop Church of the Accession. With an impressive amount of original buildings, churches, bell towers and pavilions, Kolomenskoe dates back to the 14th century, so it may take up to four hours to explore this lesser-known place. If you want to enjoy some spectacular views, visit Kolomenskoe on a sunny weekend day to catch a glimpse of local life as well.

Visit VDNKh and the Museum of Cosmonautics 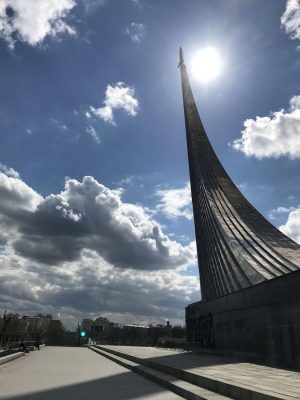 Ok, not that much of a hidden gem, but it is one of my favourite places in Moscow. The Exhibition of Achievements of the National Economy was founded to showcase and celebrate the achievements of the Soviet Union’s economy and pay tribute to the Soviet aeronautics programme. Filled with quirky statues, fantastic architecture and a wide array of popular carnival rides, VDNKh isn’t to be missed. There is a Museum of Cosmonautics just a stone’s throw away from the subway station, so you can learn something new about space exploration and technology. The entrance fee is 250 RUB (as of July 2018).

Perhaps the tallest educational building in the world, the State University overlooks Moscow from the area known as Vorobyovy Gory (meaning ‘Sparrow Hills’). The building of the Moscow State University is one of the seven Stalinist skyscrapers, so you can expect this exceptional architectural masterpiece to reveal socialist decoration in all its glory.

While you can’t enter the building without a valid student ID, the main reason to come here is the amazing panoramic view of the city. There are two subway stations near the University but I recommend using the one that calls Universitet to avoid exhausting 30-minute walk up-hill through a park.

The museum is next to Rizhskaya subway and railway stations and is another off the beaten path sight. The Railway Museum features over 70 locomotives from steam, diesel to electric, including some experimental high-speed trains. Unfortunately, all the description about exhibits are only in Russian, but you can arrange a tour in English in advance. It is well worth it. The railway museum is open daily from 10 a.m. to 5 p.m. except for Mondays and Tuesdays.

There you have it – Insider tips for visiting Moscow for first-timers!

Ivan Tannenberg is an independent traveler, history junkie, and a techno-geek. Having traveled the world out of a backpack for a year-and-a-half non-stop, he is now based in Vietnam aiming to explore new and mind-blowing destinations. Go and check his travel blog for more of his journeys around the world. Follow him on Facebook, Instagram, and Twitter.