How much does it cost to travel to Anhui?

How much money will you need for your trip to Anhui? You should plan to spend around ¥369 ($51) per day on your vacation in Anhui, which is the average daily price based on the expenses of other visitors. Past travelers have spent, on average, ¥142 ($20) on meals for one day and ¥78 ($11) on local transportation. Also, the average hotel price in Anhui for a couple is ¥302 ($42). So, a trip to Anhui for two people for one week costs on average ¥5,160 ($719). All of these average travel prices have been collected from other travelers to help you plan your own travel budget.

A vacation to Anhui for one week usually costs around ¥2,580 for one person. So, a trip to Anhui for two people costs around ¥5,160 for one week. A trip for two weeks for two people costs ¥10,320 in Anhui. If you're traveling as a family of three or four people, the price person often goes down because kid's tickets are cheaper and hotel rooms can be shared. If you travel slower over a longer period of time then your daily budget will also go down. Two people traveling together for one month in Anhui can often have a lower daily budget per person than one person traveling alone for one week.


How expensive is Anhui? How much money do I need for Anhui?

How much does a trip to Anhui cost? Is Anhui expensive? The average Anhui trip cost is broken down by category here. All of these Anhui prices are calculated from the budgets of real travelers.

Looking for a hotel in Anhui? Prices vary by location, date, season, and the level of luxury. See below for options.

How much does it cost to go to Anhui? Naturally, it depends on the dates. We recommend Kayak because they can find the best deals across all airlines.

The price of renting a car in Anhui will depends on dates, the type of car, the location, and your age. We recommend Kayak because they can find the best deals across all car rental companies.

Anhui On a Budget 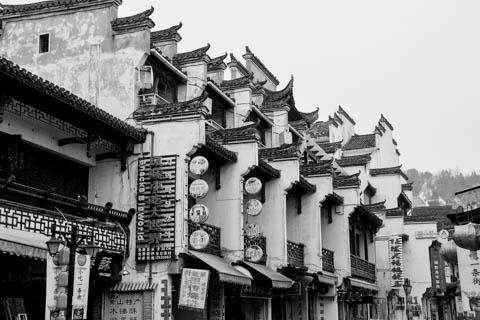 Anhui village, China
Exploring the Chinese province of Anhui is like walking around a painting. The picturesque mountains and the untouched villages make this a quiet escape from the harsh and loud cities surrounding it. Travelers should put Anhui on their list if they're seeking a glimpse into the China of the past.

One of the most popular sights to see are the natural wonders of Huangshan. This park of trails and walks wander through the mist of several peaks. There's so much to see, many tourists plan to spend a few days here - guaranteeing they'll see the most amazing sunrise. While it is a bit crowded these days with people, there are still spots of rest and tranquility.

If it's local culture you're interested in, make a stop at the village of Hongcun. This UNESCO World Heritage site is one of the most visited Huizhou villages. It was founded in the Song dynasty between 960 and 1279. Today's waterway systems still resemble that of the original idea.

Another small village deserving a visit is Xidi. With 124 surviving buildings, Xidi is a glimpse into the world of the prestigious merchants who settled here. This UNESCO World Heritage Site welcomes plenty of tourists while maintaining its picture perfect appeal. Slender lanes and ivory colored walls guide you to dark-tiled roofs and grandly decorated doorways.

The photogenic village of Chengkan is also worth a visit. It's a less visited area since some of its buildings are being renovated or retouched, but it bridges and lilies are enough to make you stop and take in the tranquility. An S-shaped stream runs through the village as a permanent symbol of the yin and yang along the heart of the village. While here, visit southern China's largest ancestral temple, Luo Dongshu Temple, or the 600-year-old Yanyi Tang building.

Another, less popular village, is Tangmo. This small village was founded be settlers in the Tang dynasty when they planted two ginkgo trees and only one grew. This became the site of Tangmo. The tree still sits in the center of the village, and continues to grow fruit after more than 1,300 years. At the west end of this village sits the Shangyi Ancestor Hall with 199 peony blossoms intricately carved into the entrance beam, and next door is Jishan Hall where you can see Huizhou opera and folk music performed most days of the year.

For those seeking a more spiritual journey, you'll want to make the trek up the Jiuhua Shan region. This collection of cliff-side temples is nestled in what the Tang-dynasty Buddhists called the earth home to the Bodhisattva Dizang - or Lord of the Underworld. The area is often covered in a fog that gives it the eerie feel the Buddhists likely recognized when calling this the home of such a character. Here is where people come to pray for the souls of the dearly departed. As one of four sacred peaks in all of China, there are plenty of temples to choose from all housing over 500 monks and nuns. It is a breathtaking place of peace and devotion.

Another spiritual climb you can venture on is the one up Qiyun Shan - or "mountain as high a the clouds." This red giant of a mountain is home to many Taoist temples and the monks who live inside of them. Be prepared for a long journey, though. The walk to the ticket office is about a 75-minute climb up stone steps. If you continue past the Zhenxian Cave you'll find several Taoist shrines carved out along the cliffs. Along the way, you'll pass through a small village along Moonlight Street. Here you'll be able to rest and grab a bite to eat.

Anhui cuisine is one of the Eight Great Cuisines of China. Because of the province's location and its poorer inhabitants, this food is made up of hearty mountain peasant dishes. Many recipes will incorporate wild ingredients from local mountains including mushrooms, bayberry, tea leaves and bamboo shoots. Some dishes you'll want to look for on the menu include Li Hongzhang stew and Farmhouse egg dumplings.

Most people explore Anhui by foot since its main attractions include hiking and mountain climbing. There are several train lines that cross the province, and the local bus system is growing and reliable.