How much does it cost to travel to Hongcun?

How much money will you need for your trip to Hongcun? You should plan to spend around ¥114 ($18) per day on your vacation in Hongcun, which is the average daily price based on the expenses of other visitors. Past travelers have spent, on average, ¥26 ($4.01) on meals for one day. Also, the average hotel price in Hongcun for a couple is ¥120 ($18). So, a trip to Hongcun for two people for one week costs on average ¥1,597 ($246). All of these average travel prices have been collected from other travelers to help you plan your own travel budget.

A vacation to Hongcun for one week usually costs around ¥798 for one person. So, a trip to Hongcun for two people costs around ¥1,597 for one week. A trip for two weeks for two people costs ¥3,194 in Hongcun. If you're traveling as a family of three or four people, the price person often goes down because kid's tickets are cheaper and hotel rooms can be shared. If you travel slower over a longer period of time then your daily budget will also go down. Two people traveling together for one month in Hongcun can often have a lower daily budget per person than one person traveling alone for one week.


How expensive is Hongcun? How much money do I need for Hongcun?

How much does a trip to Hongcun cost? Is Hongcun expensive? The average Hongcun trip cost is broken down by category here. All of these Hongcun prices are calculated from the budgets of real travelers.

Find a hostel, guesthouse, or B&B in Hongcun

What did other people spend on Food in Hongcun?

Typical prices for Food in Hongcun are listed below. These actual costs are from real travelers and can give you an idea of the prices in Hongcun, but your costs will vary based on your travel style.

What did other people spend on Entertainment in Hongcun?

Typical prices for Entertainment in Hongcun are listed below. These actual costs are from real travelers and can give you an idea of the prices in Hongcun, but your costs will vary based on your travel style.

Hongcun, China
When you picture ancient China, you likely picture old cobblestone streets, white homes with pointed black roofs and a slight air of mysticism in the surroundings. This is Hongcun.

The village itself is a sight to see. Simply walk around and note the stunning architecture and you'll have no problem seeing why Hongcun was named as an UNESCO World Heritage Site in 2000.

Many of the buildings here are preserved from the Ming and Qing Dynasties including the Chengzhi Hall. This grand building is known as the Folk Imperial Palace. Built centuries ago by a wealthy salt merchant for his two wives, this building today serves as a stunning piece of architecture with nine open roofed yards and more than 60 rooms. Wooden beams and wall panels are covered in ornate depictions of nature, Chinese mythology or scenes of every day life in the Qing Dynasty. The Red Army used this spot to house troops during the long march so you may be able to spot a few fading "Long Live Mao" paintings on the walls. Luckily, these soldiers left the artwork of the building intact.

Another sight to see is the Southern Lake Academy. Located on the north bank of Southern Lake, this spot was built in 1814 when six family schools were combined into one. This serves as a great example of the family academies of the Qing Dynasty meant to educate children and families in small groups. Visitors will, no doubt, learn much about the social life at that time.

And if you're looking to connect with Mother Nature a bit further out of town, the Yellow Mountains are always a good choice. As the premier scenic area in the entire Anhui region, these beautiful mountains are sure to relax and inspire a bit of spiritual reflection.

The layout of Hongcun is one of the most unique attractions to the area. It was designed based on traditional feng shui, and is said to be in the shape of a cow. You'll find Leigang Hall at the west end of the village acting as the head, with two massive trees as the horns. The canal system represents the creature's intestines with the half-moon Yuezhao pond as the stomach, and the bigger South Lake as the abdomen. The four bridges extending across the stream at the front and rear of the village are the cow's legs.

The food in Hongcun is heavily influenced by one of China's Eight Great Cuisines, Hui cuisine. Dating all the way back to the South Song Dynasty, this style is known for roasting, stewing, braising and quick-frying. They emphasize the duration and degree of cooking while relying heavily on the use of stocks.

One of the many popular dishes includes smelly mandarin fish, but don't worry, it's not actually smelly. Its name actually comes from the fact that, when living, this fish has a very slimy and smelly skin to ward off predators. This dish is over two hundred years old and served up tender with an ironically sweet aroma.

Another famous treat is the Mao tofu. Also known as the funky bean curd, this truly is a dish with a funky smell. Its taste, however, surpasses its smell. This traditional snack has an acquired taste and is typically served on the street in a container hanging from a shoulder pole. One end of the pole has chopsticks and a pan, while the other is the dangling tofu, sesame oil and hot pepper. It's definitely an experience to have this treat prepared for you by a street vendor.

Frequent buses provide access to Hongcun from many nearby towns and cities.

Hongcun is relatively small and flat so as long as you're capable of walking along cobblestone paths, walking is your best option for transportation. Don't worry; all roads eventually lead back to the Yuezhao Pons or the South Lake. As long as you use these two landmarks to get your bearings, you should be just fine. 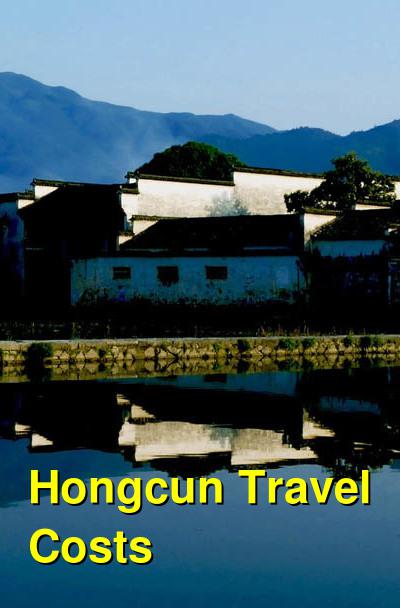 By backpackguru in Accommodation
If you're on a tight schedule, head to Hongcun in the afternoon. The tour groups will be leaving and you'll arrive in time to wander around town and watch the sun set. This is one of the most scenic times to be in town. Enjoy a great, authentic dinner, find yourself a guesthouse and enjoy a night in this peaceful town. Most guesthouses are part of people's homes and they have a wonderful atmosphere. Then you can wake up early in the morning, have a great breakfast in town, and watch the town wake up before the tour groups arrive.