How much does it cost to travel to Hebei?

How much money will you need for your trip to Hebei? You should plan to spend around ¥444 ($65) per day on your vacation in Hebei, which is the average daily price based on the expenses of other visitors. Past travelers have spent, on average, ¥107 ($16) on meals for one day and ¥157 ($23) on local transportation. Also, the average hotel price in Hebei for a couple is ¥505 ($74). So, a trip to Hebei for two people for one week costs on average ¥6,216 ($916). All of these average travel prices have been collected from other travelers to help you plan your own travel budget.

A vacation to Hebei for one week usually costs around ¥3,108 for one person. So, a trip to Hebei for two people costs around ¥6,216 for one week. A trip for two weeks for two people costs ¥12,432 in Hebei. If you're traveling as a family of three or four people, the price person often goes down because kid's tickets are cheaper and hotel rooms can be shared. If you travel slower over a longer period of time then your daily budget will also go down. Two people traveling together for one month in Hebei can often have a lower daily budget per person than one person traveling alone for one week.


How expensive is Hebei? How much money do I need for Hebei?

How much does a trip to Hebei cost? Is Hebei expensive? The average Hebei trip cost is broken down by category here. All of these Hebei prices are calculated from the budgets of real travelers.

Looking for a hotel in Hebei? Prices vary by location, date, season, and the level of luxury. See below for options.

How much does it cost to go to Hebei? Naturally, it depends on the dates. We recommend Kayak because they can find the best deals across all airlines.

The price of renting a car in Hebei will depends on dates, the type of car, the location, and your age. We recommend Kayak because they can find the best deals across all car rental companies.

Hebei On a Budget 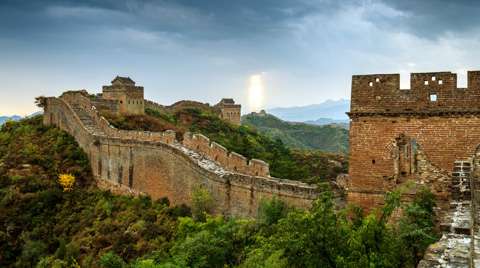 The Great Wall of China
A northern province of China located near Beijing, Hebei is situated to the north of the Yellow River and to the east of the Taihang Mountains with parts touching the Yellow Sea to the east. It is best known for the Chengde Mountain Resort, the imperial summer residence of the Qing-dynasty emperors which features 18th-century palaces, gardens, and pagodas ringed by Buddhist temples.

The Chengde Mountain Resort is perhaps the best known attraction of Hebei Province. It was built during the Qing Dynasty (1644-1911) and took about 90 years to construct. Once a summer home for the royal families, the resort is divided into four parts: the Palace Area, Lake Area, Plain Area, and Mountain Area. Also a part of the complex are the Eight Outer Temples, the name for the 12 temples located outside of Gubeikou-a section of the Great Wall. Putuo Zongchengzhi Temple is the biggest and most impressive of the temples.

Another main feature of the province is the Shanhaiguan Pass, also called "The First Pass Under Heaven." This is the easternmost end of the Great Wall of China, which juts out into the sea. The "Old Dragon Head" (or Laolongtou), since rebuilt from its original structure, is the part that touches the sea. The wall extends across much of China for over 5,000 miles, but this location (at Qinhuangdao) is where it begins, where the dragon's head looks out to the sea.

Each of Hebei's cities has a number of other worthwhile attractions, some of which include temples, historic sites, gardens, and natural scenery. A few more specific examples include Cangyan Mountain in Shijiazhuang, Qinghuang Island Wildlife Park in Qinhuangdao, Yesanpo Scenic area in Baoding, and the Ancient Lotus Flower Pond Resort in Baoding.

The capital city of Hebei Province is Shijiazhuang. It is a fairly young city, acting as the regional transport hub and economic center, though there are a few historic sights worth seeing (the most popular being the Zhaozhou Bridge Park and the Xibaipo Village). Chengde is probably the most touristed city, since it is the home of the famous Chengde Mountain Resort. This summer residence of the early Qing Dynasty emperors is considered to be an UNESCO World Heritage Site. Baoding is best known for the Yesanpo Scenic Area, Cangzhou for its martial arts and acrobatics, and Qinhuangdao for its location by the sea. Handan is also significant with thousands of years of history and a rich cultural heritage. Some of its highlights include Wahuang Palace, Chinese legends, folk arts, Buddhist temple music, traditional dance performances with fans and drums, and a local form of Tai Chi. Other important cities include Tangshan, Xingtai, Zhangjiakou, Langfang, and Hengshui.

Beyond the major sights of the Hebei Province, there are also a number of ways to experience the local culture. Traditional performances (i.e. music, dance, local crafts, martial arts demonstrations, etc.) are held in almost any city, while visitors can experience first-hand authentic day-to-day life in traditional villages of the countryside. Other activities include indulging in the local cuisine, as well as shopping which ranges from department stores and shopping centers to smaller local markets. Museums are also a good way to gain insight into the local art, history, and culture.

The hub for transportation is the province's capital city, Shijiazhuang. Shijiazhuang Zhengding International Airport is the main way of entry by plane. From the airport there are downtown shuttle buses, a high-speed train, and long-distance buses to nearby cities.

By train, Shijiazhuang Railway Station is situated in the cross of Zhanqian Street and Zhongshan Road. Trains from this station connect the city with more than 50 destinations in China, including Beijing, Shanghai, Taiyuan, Xi'an, Guangzhou, Lhasa, Kunming and Guilin.