How much does it cost to travel to Guangzhou?

How much money will you need for your trip to Guangzhou? You should plan to spend around ¥514 ($78) per day on your vacation in Guangzhou, which is the average daily price based on the expenses of other visitors. Past travelers have spent, on average, ¥112 ($17) on meals for one day and ¥81 ($12) on local transportation. Also, the average hotel price in Guangzhou for a couple is ¥663 ($100). So, a trip to Guangzhou for two people for one week costs on average ¥7,191 ($1,088). All of these average travel prices have been collected from other travelers to help you plan your own travel budget.

A vacation to Guangzhou for one week usually costs around ¥3,595 for one person. So, a trip to Guangzhou for two people costs around ¥7,191 for one week. A trip for two weeks for two people costs ¥14,382 in Guangzhou. If you're traveling as a family of three or four people, the price person often goes down because kid's tickets are cheaper and hotel rooms can be shared. If you travel slower over a longer period of time then your daily budget will also go down. Two people traveling together for one month in Guangzhou can often have a lower daily budget per person than one person traveling alone for one week.


How expensive is Guangzhou? How much money do I need for Guangzhou?

How much does a trip to Guangzhou cost? Is Guangzhou expensive? The average Guangzhou trip cost is broken down by category here. All of these Guangzhou prices are calculated from the budgets of real travelers.

How much do vacation rentals cost in Guangzhou? Prices vary by location, date, size of the place, and the level of luxury. See below for options.

How much does it cost to go to Guangzhou? Naturally, it depends on the dates. We recommend Kayak because they can find the best deals across all airlines.

The price of renting a car in Guangzhou will depends on dates, the type of car, the location, and your age. We recommend Kayak because they can find the best deals across all car rental companies.

Tips and Handouts Budget in Guangzhou

Guangzhou On a Budget 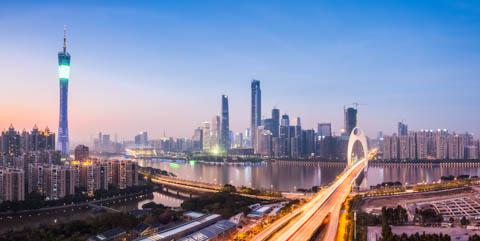 Guangzhou, China
With a population of more than 12 million, Guangzhou is the third largest city in China after Beijing and Shanghai. Though it has a long history, founded in 214 BC, the city has also many modern attractions, a mix of the old and new with temples and parks as well as skyscrapers and shopping centers. Its location on the Pearl River has contributed to this growth, making Guangzhou a major port and commercial hub.

While the city beholds a beautiful modern skyline reflecting grandly in the Pearl River, there are a number of sights within the city just as striking. One significant landmark includes the 19th century architecture of the Chen Clan Academy, once owned by the wealthy Chen family and now displaying a number of ivory sculpture and artistic statues. Shamian Island, just outside of the bustling metropolis, also exhibits impressive architecture of the colonial era including the Our Lady of Lourdes Chapel. And then there is Canton Tower-the tallest structure in China, featuring an observation deck, restaurants, a 4-D theatre, and other entertainment.

As far as religious sites go, there are many temples throughout Guagzhou, significant of local culture. Bright Filial Piety Temple (or Guangxiao Temple) is the oldest and largest Buddhist temple in the Lingnan Area, making it a popular pilgrimage site for Zen Buddhists. Liurong Temple, also known as the Temple of Six Banyan Trees, is one of the most popular attractions in Guangzhou. It also includes the 17-story, eight-sided Hua Ta, or Flowering Pagoda. The temple dates back to the 6th century, while the pagoda predates it by about 300 years.

There are also a few traditional villages on the outskirts of the city for those interested in local culture and history, as well as museums and galleries dedicated to the same. Not to mention, endless opportunities for shopping.

Guangzhou is divided into ten districts. Among them, Yuexiu, Liwan, and Tianhe make up the City Center.

Yuexiu has been central to the city's culture since its founding in 214 BC. Some of its highlights include Yuexiu Park, Guangzhou Museum located at Zhanhai Tower, Orchid Garden, Mausoleum of Nanyue King, Guangxiao Temple, Temple of Six Banyan Trees, Huangsheng Mosque, Beijing Lu Shopping District, Sun Yat-Sen Memorial Hall, Temple of Five Rams, and Shishi Cathedral.
Liwan is on the north side of the Pearl River and makes up the old Guangzhou area. Some attractions include the colonial Shamian Island, Xiguan Old Houses, Xiangxiajiu shopping Street, and Liziwan Lake Park, and Chen Clan Academy.

Tianhe is the city's business district with many skyscrapers and shopping centers, as well as the transportation hub for trains to Hong Kong. Highlights of Tianhe include Guangdong Museum, Central Library, Opera House, and Shipai village.

Panyu, just outside the city center, is also popular with a number of theme parks as well as historic villages and towns that exemplify the traditional lifestyle of southern China.

In addition to sightseeing, museums, galleries, and temples, Guagzhou also has many historic parks for a little escape from the bustle of the city. Yuexiu Park is the largest urban park in China, covering a lush green area that flows over acres of hills and includes several lakes. It is home to the Ming Dynasty Zhenhai Tower as well as the Guangzhou Museum with relics on five floors dating back 5,000 years and an up-to-date miniature of modern Guangzhou. For more information, see this great guide to things to do in Guangzhou.

Baiyun Mountain (White Cloud Mountain) also offers opportunities for some outdoor adventure just outside the city, with trails, recreation activities, and a beautiful view of Guangzhou from above.

Specialties of Guangzhou largely consist of Cantonese cuisine, which is well known for its fragrance, taste, and presentation. Dim sum, a kind of bite size snack, is especially popular and comes in many varieties, some of which include shrimp dumpling and steamed shaomai. Cantonese cuisine is also famed as one of the most adventurous kinds of dining, as it can include absolutely any kind of animal and all of its parts. Liver, kidneys, heart and even brain-nothing is wasted in Cantonese cooking. Dishes are sure to include an expansive and exotic range of ingredients. Duck, chicken, pork, and seafood are common. As far as desserts go, they are mostly pudding or custard like with flavors including ginger, red or green bean, and black sesame.

Guangzhou Baiyun International Airport is a major travel hub in southern China, second to Hong Kong. The airport is home base to China Southern Airlines and also hosts a wide range of other airlines from international destinations. It is located about 28 km (17 mi) north if central Guangzhou.

From the airport, the most convenient way into the city is by Metro Line 3. The lower level of the airport terminal leads to the Airport South Metro station. Taxis and airport buses are also available.

It location on the Pearl River also allows for transportation by boat or ferry.