Should you visit Cape Canaveral or Key West?

Which city is more affordable and which is best for your travel style? If you're trying to figure out where to go next, comparing the travel costs between Cape Canaveral and Key West can help you decide which place is right for you.

Which city is cheaper, Key West or Cape Canaveral?

The average daily cost (per person) in Cape Canaveral is $130, while the average daily cost in Key West is $170. These costs include accommodation (assuming double occupancy, so the traveler is sharing the room), food, transportation, and entertainment. While every person is different, these costs are an average of past travelers in each city. Below is a breakdown of travel costs for Cape Canaveral and Key West in more detail.

An average hotel room with basic furnishings costs about $156 in Cape Canaveral For the most convenient locations and nicer amenities you can expect to pay a bit more.

A hotel room in Key West is about $212 This assumes double occupancy and modest accommodations.

Food in Cape Canaveral costs travelers about $34 per day on average. Restaurants can vary significantly in price, so choose wisely if you're trying to save money. Fast food and street stalls are typically your cheapest options, which sit down restaurants can be significantly more expensive.

In Key West travelers spend around $38 a day on food. You can save money by choosing casual restaurants or food stalls, or you can spend plenty more by dining in nicer restaurants at every meal.

Some typical examples of transportation costs in Key West are as follows:

Sightseeing expenses in Cape Canaveral, including the cost of admission tickets for day tours, museums, and attractions, usually cost an average of $14 per day, per person.

Entertainment and activities in Key West typically cost an average of $26 per person, per day. This includes fees paid for admission tickets to museums and attractions, day tours, and other sightseeing expenses.

Here are a few actual costs in Cape Canaveral for available activities, ticket prices, and tours:

For Key West, here are a few prices for actual activities, tours, and tickets provided by various companies:

The average person spends about $10 on alcoholic beverages in Cape Canaveral per day. The more you spend on alcohol, the more fun you might be having despite your higher budget.

Some specific costs for nightlife related activities in Key West: 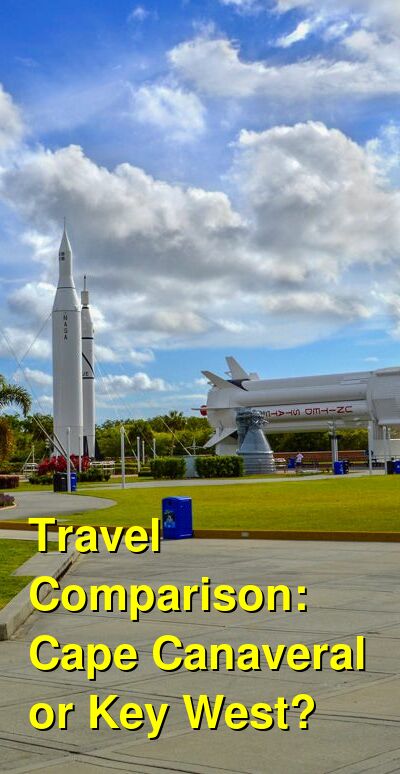