Should you visit Cape Canaveral or Cocoa Beach?

Which city is more affordable and which is best for your travel style? If you're trying to figure out where to go next, comparing the travel costs between Cape Canaveral and Cocoa Beach can help you decide which place is right for you.

Cocoa Beach, Florida has long been a favorite vacation spot for travelers looking for sun, sand, and waves. The location was also made famous as the setting for the 1960's television show, "I Dream of Jeannie". The town of just over 11,000 is located in Brevard County along the Atlantic coast. Many people visit the area because of its excellent surfing. There are many surfing festivals and competitions held here yearly and the famous Ron Jon's surf shop receives about 2 million visitors a year. The city is also home to the East Coast Surfing Hall of Fame.

Which city is cheaper, Cocoa Beach or Cape Canaveral?

The average daily cost (per person) in Cape Canaveral is $130, while the average daily cost in Cocoa Beach is $116. These costs include accommodation (assuming double occupancy, so the traveler is sharing the room), food, transportation, and entertainment. While every person is different, these costs are an average of past travelers in each city. Below is a breakdown of travel costs for Cape Canaveral and Cocoa Beach in more detail.

An average hotel room with basic furnishings costs about $156 in Cape Canaveral For the most convenient locations and nicer amenities you can expect to pay a bit more.

For a normal double-occupancy room in Cocoa Beach, $136 is the average cost for a hotel room. Also in Cocoa Beach, the typical price for a place to stay for one person is $68, such as in a hostel.

Food in Cape Canaveral costs travelers about $34 per day on average. Restaurants can vary significantly in price, so choose wisely if you're trying to save money. Fast food and street stalls are typically your cheapest options, which sit down restaurants can be significantly more expensive.

The average traveler spends about $35 per day in Cocoa Beach for food, but obviously this is dependent on the type of restaurant and the amount of food ordered. To save money you can grab a lighter lunch or dinner, or you can try fast food or street food.

Also for Cocoa Beach, here are a few examples of actual transportation services:

Sightseeing expenses in Cape Canaveral, including the cost of admission tickets for day tours, museums, and attractions, usually cost an average of $14 per day, per person.

Sightseeing expenses in Cocoa Beach, including the cost of admission tickets for day tours, museums, and attractions, usually cost an average of $13 per day, per person.

Here are a few actual costs in Cape Canaveral for available activities, ticket prices, and tours:

Tours and Activities in Cocoa Beach

Here are a few actual costs in Cocoa Beach for available activities, ticket prices, and tours:

The average person spends about $10 on alcoholic beverages in Cape Canaveral per day. The more you spend on alcohol, the more fun you might be having despite your higher budget.

The average person spends about $16 on alcoholic beverages in Cocoa Beach per day. The more you spend on alcohol, the more fun you might be having despite your higher budget.

When comparing the travel costs between Cape Canaveral and Cocoa Beach, we can see that Cape Canaveral is more expensive. However, the two cities are actually relatively comparable in price, as the difference is somewhat minimal. Generally, this means that you could travel with generally the same travel style and level of luxury in each place. Since both cities are in North America, it's no surprise that their costs are relatively close, as many destinations here have somewhat similar travel prices overall. 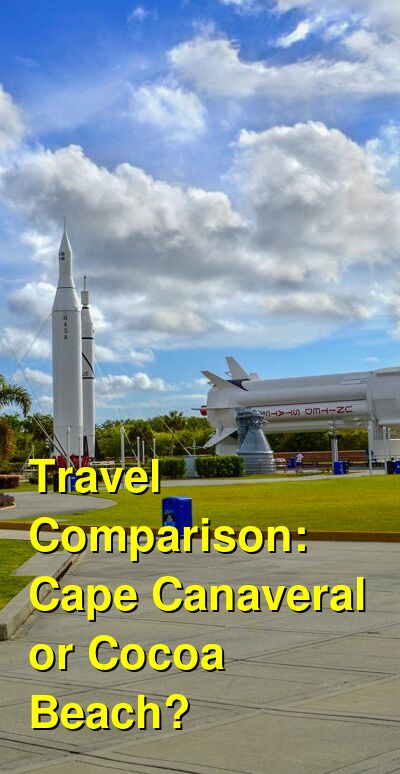