How much does it cost to travel to Fort Lauderdale?

How much do AirBnB's cost in Fort Lauderdale? Prices vary by location, size of the place, and the level of luxury. See below for options.

How much does it cost to go to Fort Lauderdale? Naturally, it depends on the dates. We recommend SkyScanner or Kayak because they can find the best deals across all airlines.

Fort Lauderdale On a Budget

The city has a subtropical rainforest climate with an average monthly temperature that doesn't fall below 65 degrees Fahrenheit. There is a wet and dry season. The wet season is during the summer months between May and October. The weather during these months is hot and humid and daily thunderstorms are common. They can be intense with extreme downpours, but typically don't last long. Daytime temperatures are usually in the high 80s or low 90s and nights hover around 75 degrees Fahrenheit. The dry season is between November and April when the weather is sunny, dry and warm. The highs are usually in the mid 70s and the lows drop to around 60 degrees Fahrenheit. This is also the most common time for brush fires.

Fort Lauderdale is really about the beach. The most popular beach area is referred to as "The Strip" and is located where A1A runs along the beach between Las Olas Blvd north to Sunrise Blvd. This area has many bars and clubs that attract an upscale crowd.

Aside from the beach, there are a handful of museums around the city. These include the Museum of Art, the Musesum of Discovery and Science, Old Fort Lauderdale Village and Museum, and the Antique Car Museum.

Areas of interest for tourists in Fort Lauderdale include The Strip, Downtown, Las Olas Blvd, and Wilton Manors. The Strip is the most popular section of beach that is located where the A1A runs along the beach between Las Olas Blvd north to Sunrise Blvd. The downtown area has grown dramatically in the past decade and now has many hotels and condos. There are many boutiques, art galleries and restaurants in the area. Las Olas Boulevard is in the entertainment district and has many upscale shops and restaurants. Wilton Manors is a popular area for gays and lesbians. It has many hotels, restaurants and nightclubs and is just two miles north of the downtown area.

Activities in Fort Lauderdale include shopping, sports, biking, hanging out on the beach, clubbing, golfing, scuba diving, snorkeling and deep sea fishing. You can also take overnight excursions to the Florida Keys or the Bahamas, and the Everglades are not far away.

There is an endless supply of good restaurants in Fort Lauderdale. The most popular areas to eat are Las Olas Blvd, Olde Town Fort Lauderdale and the Beach. You'll find a mix of local eateries and American chain restaurants. Budget options around town include delis, cafes, sub shops, and ethnic cuisine. Thai food, hamburgers, Chinese and seafood are all common. Many restaurants offer outdoor seating so that you can take advantage of the pleasant temperatures.

If you want to grab a drink, there are plenty of places with character and style. Popular options include Tarpon Bend, Voodoo Lounge, Elbo Room, Shooters, Grady's Bar and Boom.

On the east side of Fort Lauderdale you'll find canals that cross between the downtown area and the beach. The canals must be crossed on bridges, so having a good map is essential. In general, the easiest way to travel around town is with a car. There are many car rental agencies around town and at the airport, although it is cheaper to rent your car from somewhere other than the airport. Taxis are available but they can be quite expensive. Public transportation is available in the form of bus or trolley. The county bus system connects the entire metropolitan area but is slow and inconvenient. You should not rely on the buses as your sole form of transit. The Trolley system connects Fort Lauderdale's downtown, beach and convention center areas. It also links the downtown to the Broward Blvd Tri-Rail Station. The most scenic route is the Sun-Trolley or the 11 bus which runs along Las Olas Blvd and A1A.

Tri-Rail is the commuter train that runs parallel to I-95. It connects Miami, Fort Lauderdale and West Palm Beach as well as the major airports and Miami's Metrorail. The trains can often be very late with infrequent service.

Water Bus is a unique option that has 11 stopping points in east Fort Lauderdale along the Intracoastal Waterway and New River. It connects hotels, shopping, restaurants, beaches and more. 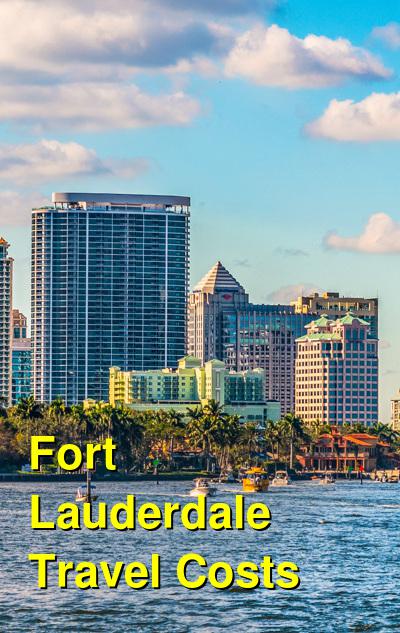 The Beach of Fort Lauderdale

By Bryan in Entertainment
The most popular section of the beach is where A1A runs along the shore, between Las Olas Blvd north to Sunrise. The "Elbo Room" bar, located at Las Olas Blvd and A1A was featured in the 1960's film "Where the Boys Are". The movie then led to the city's reputation as a spring break mecca for college students. The bar anchors the Southern end of what is known as the 'Strip', a strip of eating and drinking establishments running along the beach road. The city now attracts a more upscale crowd, being more cosmopolitan than most, with lots of Europeans and gay residents. The beach culture is reflected in the laid back nature of the community. You will find European food in the restaurants and bathers in thong swimsuits. The downtown area, especially around Las Olas Boulevard, has seen dramatic growth lately, and now is the location for many new hotels and high-rise condos. Other developments include a new boutiques, art galleries and restaurants.