Which city is more affordable and which is best for your travel style? If you're trying to figure out where to go next, comparing the travel costs between Ho Chi Minh City and New York City can help you decide which place is right for you.

Where Should I go: Ho Chi Minh City or New York City?

Ho Chi Minh City, formerly Saigon, is the largest city in Vietnam. It previously served as the capital of the Republic of Vietnam (South Vietnam). The metropolitan area, including Ho Chi Minh City, Thu Dau Mot, Di An, Bien Hoa, and other surrounding towns, has a population of more than 9 million people and continues to grow.

The average daily cost (per person) in Ho Chi Minh City is $69, while the average daily cost in New York City is $238. These costs include accommodation (assuming double occupancy, so the traveler is sharing the room), food, transportation, and entertainment. While every person is different, these costs are an average of past travelers in each city. What follows is a categorical breakdown of travel costs for Ho Chi Minh City and New York City in more detail.

Looking for a hotel in Ho Chi Minh City or New York City? Prices vary by location, date, season, and the level of luxury. See below for options and compare which is best for your budget and travel style.

Here are some examples of typical transportation prices from actual travelers in Ho Chi Minh City:

Is it cheaper to fly into Ho Chi Minh City or New York City?

Prices for flights to both New York City and Ho Chi Minh City change regularly based on dates and travel demand. We suggest you find the best prices for your next trip on Kayak, because you can compare the cost of flights across multiple airlines for your prefered dates.

Here are some examples of typical meal expenses from previous travelers to Ho Chi Minh City:

For Ho Chi Minh City, here are some samples of tours and activities related to meals and dining experiences:

For Ho Chi Minh City, here are some examples of average entertainment and activity prices from previous travelers:

Also, here are some specific examples of entertainment, tickets, and activities for Ho Chi Minh City.

Below are a few samples from actual travelers for alcohol and nightlife costs in Ho Chi Minh City: 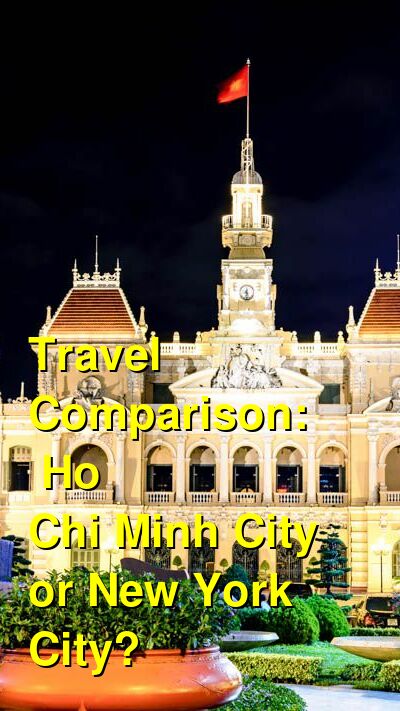