A Travel Price Comparison for Families, Couples, and Backpackers Lulea vs. Lillehammer for Vacations, Tours, and Honeymoons

Should you visit Lulea or Lillehammer?

Trying to figure out where to travel next? This travel cost comparison between Lulea and Lillehammer can help. For many travelers, the cost of a destination is a primary consideration when choosing where to go.

Most people know the name Lillehammer because it is the city that hosted the 1994 Olympics. While it's obviously a beautiful travel destination during the winter months when it's covered in snow and winter sport opportunities are abundant, it is also a lovely travel destination in the summer. It's a surprisingly small town with a population of around 25,000. It's streets are lined with quaint, wooden houses that date back to the 19th century. The town is located on the banks of Lake Mjosa. There's a nice shopping street that's called Storgata and cuts through the middle of the old town. It is pedestrian only, giving it a charming atmosphere and making it an enjoyable place to walk around. The town also has nice galleries and museums that are worth a visit.

Which city is cheaper, Lillehammer or Lulea?

The average daily cost (per person) in Lulea is $105, while the average daily cost in Lillehammer is $103. These costs include accommodation (assuming double occupancy, so the traveler is sharing the room), food, transportation, and entertainment. While every person is different, these costs are an average of past travelers in each city. Below is a breakdown of travel costs for Lulea and Lillehammer in more detail.

A hotel room in Lillehammer is about $124 This assumes double occupancy and modest accommodations.

The average traveler spends about $35 per day in Lillehammer for food, but obviously this is dependent on the type of restaurant and the amount of food ordered. To save money you can grab a lighter lunch or dinner, or you can try fast food or street food.

Is it cheaper to fly into Lulea or Lillehammer?

Prices for flights to both Lillehammer and Lulea change regularly based on dates and travel demand. We suggest you find the best prices for your next trip on Kayak, because you can compare the cost of flights across multiple airlines for your prefered dates.

Entertainment and activities in Lillehammer typically cost an average of $16 per person, per day. This includes fees paid for admission tickets to museums and attractions, day tours, and other sightseeing expenses.

While the amount that someone spends on alcohol while visiting Lillehammer may vary from person to person, on average a person spends $13 per day on alcoholic beverages.


When comparing the travel costs between Lulea and Lillehammer, we can see that Lulea is more expensive. However, the two cities are actually relatively comparable in price, as the difference is somewhat minimal. Generally, this means that you could travel with generally the same travel style and level of luxury in each place. Since both cities are in Europe, it's no surprise that their costs are relatively close, as many destinations here have somewhat similar travel prices overall. 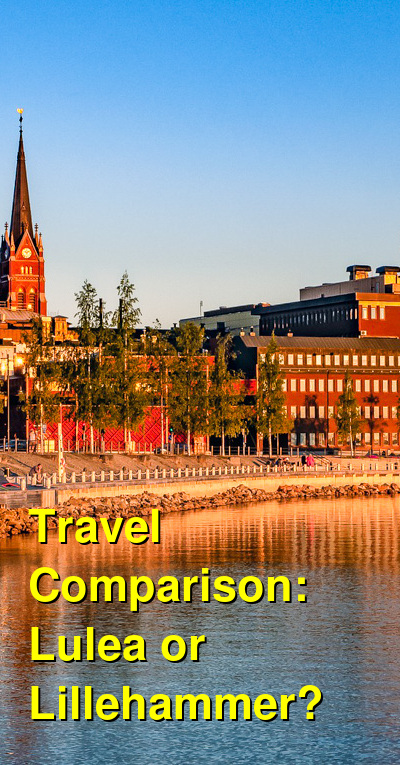