A Travel Price Comparison for France Montpellier vs. Chartres for Vacations, Tours, and Honeymoons

Should you visit Montpellier or Chartres?

Which city should you visit? Read on to compare the activities as well as the prices of travel for Montpellier and Chartres. We'll break down costs for accommodation, food, transportation and more to help you learn more about these two destinations. Then, you can figure out if either of these two places are accessible based on your travel budget, schedule, and interests. So, let's dig into it.

Chartres is a city in north-central France southwest of Paris. It is famed for its massive Cathedrale Notre-Dame. The well-preserved Gothic cathedral, completed in 1220, features 2 towering spires, Romanesque sculptures and elaborate rose windows. The cathedral is unique in that it has two very different steeples – one Gothic, the other Romanesque. Follow them to check out the cathedral's dazzling blue stained-glass windows and its collection of relics, including the Sainte Voile (Holy Veil) said to have been worn by the Virgin Mary when she gave birth to Jesus, which have lured pilgrims since the Middle Ages. The nearby Centre International du Vitrail has workshops and exhibits on stained-glass art. Chartres also had a carefully preserved old city, which is adjacent to the cathedral with staircases and steep streets lined with half-timbered medieval houses leading downhill to the narrow western channel of the Eure River, romantically spanned by footbridges.

Which city is cheaper, Chartres or Montpellier?

The average daily cost (per person) in Montpellier is €84, while the average daily cost in Chartres is €93. These costs include accommodation (assuming double occupancy, so the traveler is sharing the room), food, transportation, and entertainment. While every person is different, these costs are an average of past travelers in each city. What follows is a categorical breakdown of travel costs for Montpellier and Chartres in more detail.

Hired Cars and Shuttles in Chartres

Also for Chartres, here are a few examples of actual transportation services:

Is it cheaper to fly into Montpellier or Chartres?

Prices for flights to both Chartres and Montpellier change regularly based on dates and travel demand. We suggest you find the best prices for your next trip on Kayak, because you can compare the cost of flights across multiple airlines for your prefered dates.

When comparing the travel costs between Montpellier and Chartres, we can see that Chartres is more expensive. However, the two cities are actually relatively comparable in price, as the difference is somewhat minimal. Generally, this means that you could travel with generally the same travel style and level of luxury in each place. Since both cities are in Europe, it's no surprise that their costs are relatively close, as many destinations here have somewhat similar travel prices overall. 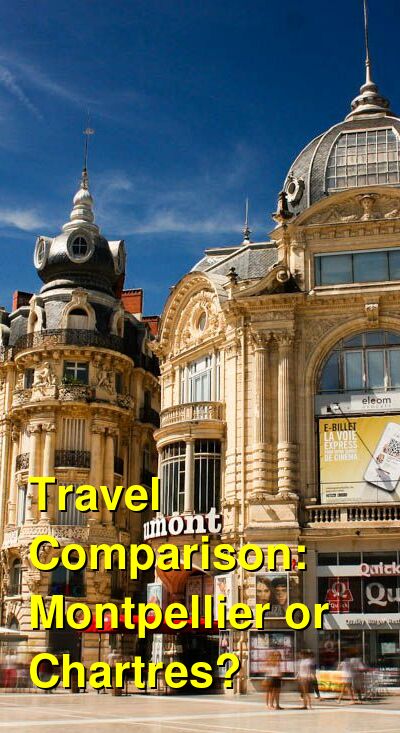