A Travel Price Comparison for Italy Piazza Armerina vs. Cefalu for Vacations, Tours, and Honeymoons

Should you visit Piazza Armerina or Cefalu?

Which city should you visit? Read on to compare the prices of travel for Piazza Armerina and Cefalu. We’ll break down costs for accommodation, food, transportation and more to help you learn more about these two destinations. Then, you can figure out if either of these two places are accessible based on your travel budget. So, let's dig into it.

Cefalu is a fishing village and beach resort that is located on the northern coast of Sicily, Italy. It sits on the Tyerrhenian Sea and is just 70 kilometers from Palermo and 185 kilometers from Messina. The town has a small population of under 14,000 residents but is a significant tourist destination on the island of Sicily. The city is flooded with millions of tourists every year from around Sicily, elsewhere in Italy, and abroad. During the summer months it is not uncommon for the city's population to triple, putting a lot of pressure on the main streets and roads around town. The city is popular as a beach resort with a youthful vibe and an active nightlife.

Which city is cheaper, Cefalu or Piazza Armerina?

The average daily cost (per person) in Piazza Armerina is €74, while the average daily cost in Cefalu is €95. These costs include accommodation (assuming double occupancy, so the traveler is sharing the room), food, transportation, and entertainment. While every person is different, these costs are an average of past travelers in each city. Below is a breakdown of travel costs for Piazza Armerina and Cefalu in more detail.

Accommodation prices vary by location and style, but travelers pay on average about €90 for a double occupancy room in Piazza Armerina.

For a normal double-occupancy room in Cefalu, €140 is the average cost for a hotel room. Also in Cefalu, the typical price for a place to stay for one person is €70, such as in a hostel.

Public transportation tends to be much less expensive in Cefalu than paying for a taxi or private car service, as is expected. Typically, people spend €3.43 on transportation in Cefalu on average per day.


Hired Cars and Shuttles in Cefalu

Also for Cefalu, here are a few examples of actual transportation services:

Is it cheaper to fly into Piazza Armerina or Cefalu?

Prices for flights to both Cefalu and Piazza Armerina change regularly based on dates and travel demand. We suggest you find the best prices for your next trip on Kayak, because you can compare the cost of flights across multiple airlines for your prefered dates.

In Piazza Armerina travelers spend around €26 a day on food. You can save money by choosing casual restaurants or food stalls, or you can spend plenty more by dining in nicer restaurants at every meal.

The average traveler spends about €22 per day in Cefalu for food, but obviously this is dependent on the type of restaurant and the amount of food ordered. To save money you can grab a lighter lunch or dinner, or you can try fast food or street food.

For Cefalu, here are some samples of tours and activities related to meals and dining experiences:

Piazza Armerina's costs for entertainment, tickets, attractions, and tours will often cost around €3.43 per person, per day. This cost can vary widely by the type of activity, however, as this includes admission tickets, day tours, museums, and other things to do.

Sightseeing expenses in Cefalu, including the cost of admission tickets for day tours, museums, and attractions, usually cost an average of €4.57 per day, per person.


Tours and Activities in Piazza Armerina

Tours and Activities in Cefalu

For Cefalu, here are a few prices for actual activities, tours, and tickets provided by various companies:

The average person spends about €10 on alcoholic beverages in Piazza Armerina per day. The more you spend on alcohol, the more fun you might be having despite your higher budget. 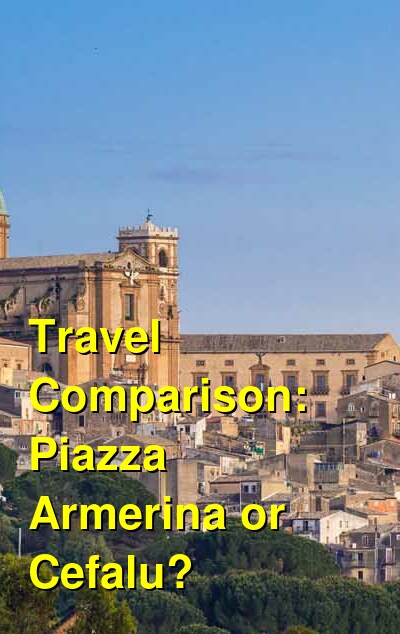