A Travel Price Comparison for Italy Volterra vs. Livorno for Vacations, Tours, and Honeymoons

Should you visit Volterra or Livorno?

Should I visit Volterra or Livorno? This is a common question asked by many travelers. By figuring out which city is more affordable, you'll understand where you can get more bang for your buck. So, let's dive into the data, which all comes from actual travelers.

Located in Tuscany, Volterra has an interesting history and impressive sights for travelers who want to see more of the Tuscan region than the popular city of Florence. The town was originally a Neolithic settlement and is believed to have been continuously inhabited since the end of the 8th century BC. It was a bishop's residence during the 5th century and then an episcopal power during the 12th century. It was later conquered by the Florentines but opposition to their rule led to much rebellion.

Livorno is a relatively large port city on the Tyrrhenian Sea on the western coast of Italy. It has a population of just over 160,000 and is well connected by ferry. Because of the many ferry connections, Livorno makes a convenient starting point for a tour of Tuscany. Pisa is accessible within half an hour and both Lucca and Florence can be reached in a little over an hour. Several of the hotels in town organize comprehensive and efficient tours of the area that might include Chianti, Monteriggioni, San Gimignano, Siena and Volterra all in one day. If you're arriving on a cruise ship and hoping to make it back before departure time, then these tours are not recommended.

Which city is cheaper, Livorno or Volterra?

The average daily cost (per person) in Volterra is €81, while the average daily cost in Livorno is €108. These costs include accommodation (assuming double occupancy, so the traveler is sharing the room), food, transportation, and entertainment. While every person is different, these costs are an average of past travelers in each city. Below is a breakdown of travel costs for Volterra and Livorno in more detail.

If you're traveling alone, you may be able to find a budget hotel or hostel for around €48. But for two people in a standard two-person hotel room in Volterra the cost is €96 on average.

The prices for places to stay in Livorno can vary by date, location, and type. Generally, the average cost for accommodation per person is €60, while a typical double-occupancy hotel room for two people will cost around €120.

Food in Volterra costs travelers about €29 per day on average. Restaurants can vary significantly in price, so choose wisely if you're trying to save money. Fast food and street stalls are typically your cheapest options, which sit down restaurants can be significantly more expensive.

The price of a meal in Livorno can vary widely. However, the average price for food per day is €34 per person, and a typical meal will cost around €14 based on the spending of previous visitors. Less expensive dining options can be found by eating street food or at fast food restaurants.

For Livorno, here are some samples of tours and activities related to meals and dining experiences:

Livorno's transportation costs can vary by the type of transport chosen by visitors. Naturally, taxis and private drivers cost much more than public transportation options. On average, visitors spend €19 per person, per day on transportation in Livorno.


Hired Cars and Shuttles in Volterra

Some specific examples of transportation prices in Volterra:

Hired Cars and Shuttles in Livorno

Also for Livorno, here are a few examples of actual transportation services:

Is it cheaper to fly into Volterra or Livorno?

Prices for flights to both Livorno and Volterra change regularly based on dates and travel demand. We suggest you find the best prices for your next trip on Kayak, because you can compare the cost of flights across multiple airlines for your prefered dates.

Entertainment and activities in Volterra typically cost an average of €9.14 per person, per day. This includes fees paid for admission tickets to museums and attractions, day tours, and other sightseeing expenses.

Sightseeing, admission tickets, things to do, and other entertainment expenses in Livorno can vary widely by price. On average, visitors spend around €21 per person, per day on entertainment and sightseeing here.


Tours and Activities in Volterra

Here are a few actual costs in Volterra for available activities, ticket prices, and tours:

Tours and Activities in Livorno

Also, here are some specific examples of entertainment, tickets, and activities for Livorno.

While the amount that someone spends on alcohol while visiting Volterra may vary from person to person, on average a person spends €13 per day on alcoholic beverages.

Alcoholic beverages can often be a significant portion of a traveler's budget, and the costs can vary greatly from person to person. In Livorno, the average amount that a visitor spends on alcoholic beverages per day is €19.


Sample the Local Flavors in Volterra

Some specific costs for nightlife related activities in Volterra:

Sample the Local Flavors in Livorno

Here are a few nightlife and alcohol tours and activities from local tour providers in Livorno:

When we compare the travel costs of actual travelers between Volterra and Livorno, we can see that Livorno is more expensive. And not only is Volterra much less expensive, but it is actually a significantly cheaper destination. So, traveling to Volterra would let you spend less money overall. Or, you could decide to spend more money in Volterra and be able to afford a more luxurious travel style by staying in nicer hotels, eating at more expensive restaurants, taking tours, and experiencing more activities. The same level of travel in Livorno would naturally cost you much more money, so you would probably want to keep your budget a little tighter in Livorno than you might in Volterra. 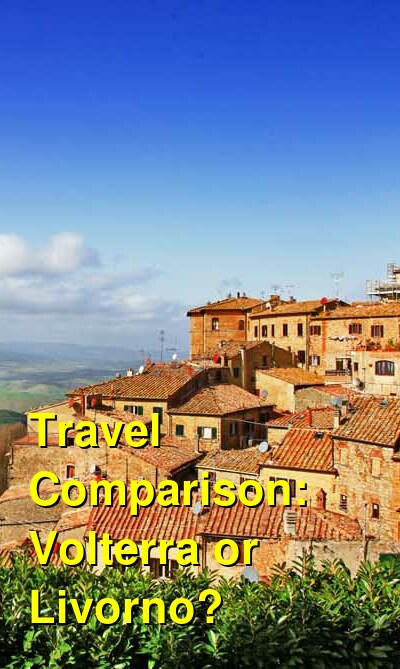