Where to Stay & Where to Eat

The Amalfi Coast is a breathtaking, beautiful 34 mile stretch of coastline in the Campania region. It's a UNESCO World Heritage site that includes dramatic seaside cliffs, beautiful Mediterranean water, and more than a dozen charming seaside towns, each connected by the SS163 highway. This highway is one of the most scenic drives in the world and each town offers its own personality and character.

Sorrento is the first town of the Amalfi Coast and the most accessible city to visit. It's a popular option for daytrippers and one of the more touristy towns in the area, so you can expect large crowds during the peak summer months. Crowds are significantly less during the fall, winter, and spring months. If you're planning to take day trips outside of the Amalfi Coast and want easy transportation connections to places like Pompeii or Naples, then this town is a great base. It also has a good combination of modern comforts and old world charm. 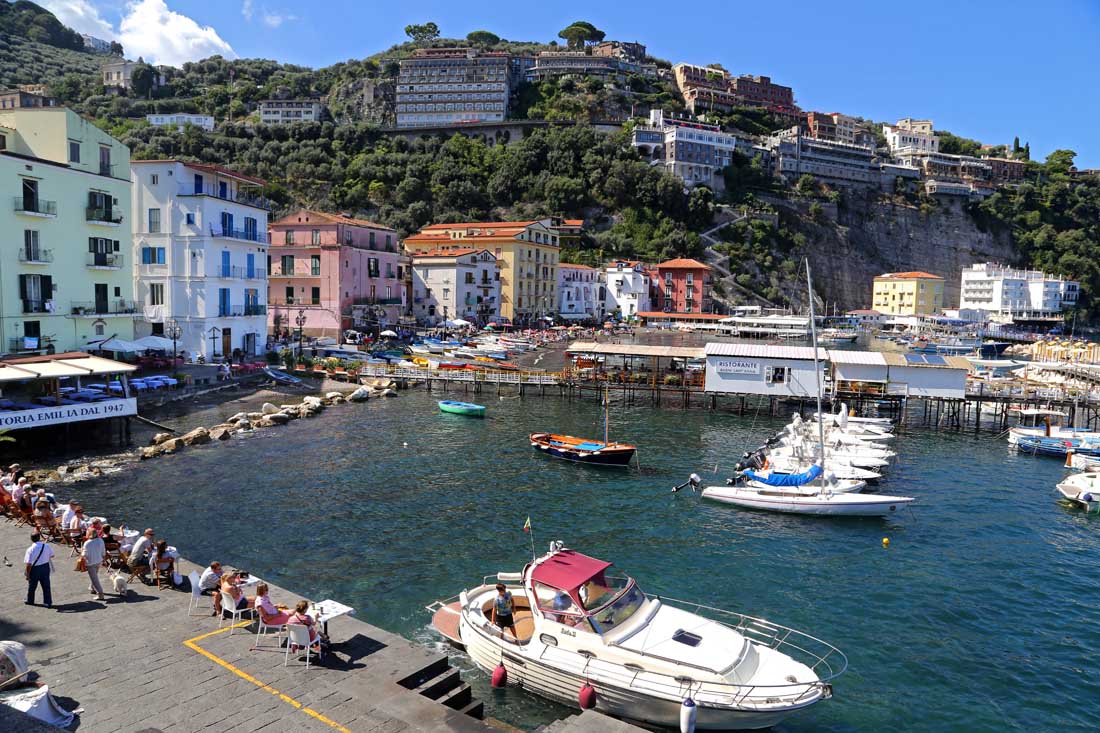 $86.21
Positano is one of the most famous towns along the Amalfi Coast, in part because it attracts many rich celebrities. It's a luxurious place to stay with many chic hotels and restaurants. It also has striking beauty with its famous pastel houses tucked into the dramatic cliffs. Positano is known for its vibrant energy, and the town comes to life with a lively nightlife scene. There are many exclusive clubs, bars, and restaurants around town, as well as upscale shopping for those looking for high end purchases. The town's central location make it convenient for exploring the coastline, but its popularity means that the crowds are intense during the peak summer months. This is also one of the priciest places to stay along the Amalfi Coast.

$61.30
Amalfi is the largest town in the area and one of the more popular destinations for tourists. Despite its popularity, it maintains a quaint atmosphere and has a history that dates back to the 6th century when it was known as a maritime power. If you're looking to relax then head to the pebble beach.

Amalfi makes a good base if you're planning to explore other towns along the coastline. It's about 40 minutes from Sorrento and 40 minutes from Salerno and it has luxurious accommodation without the even higher price tags of Positano. It's also a quieter town without the vibrant nightlife. 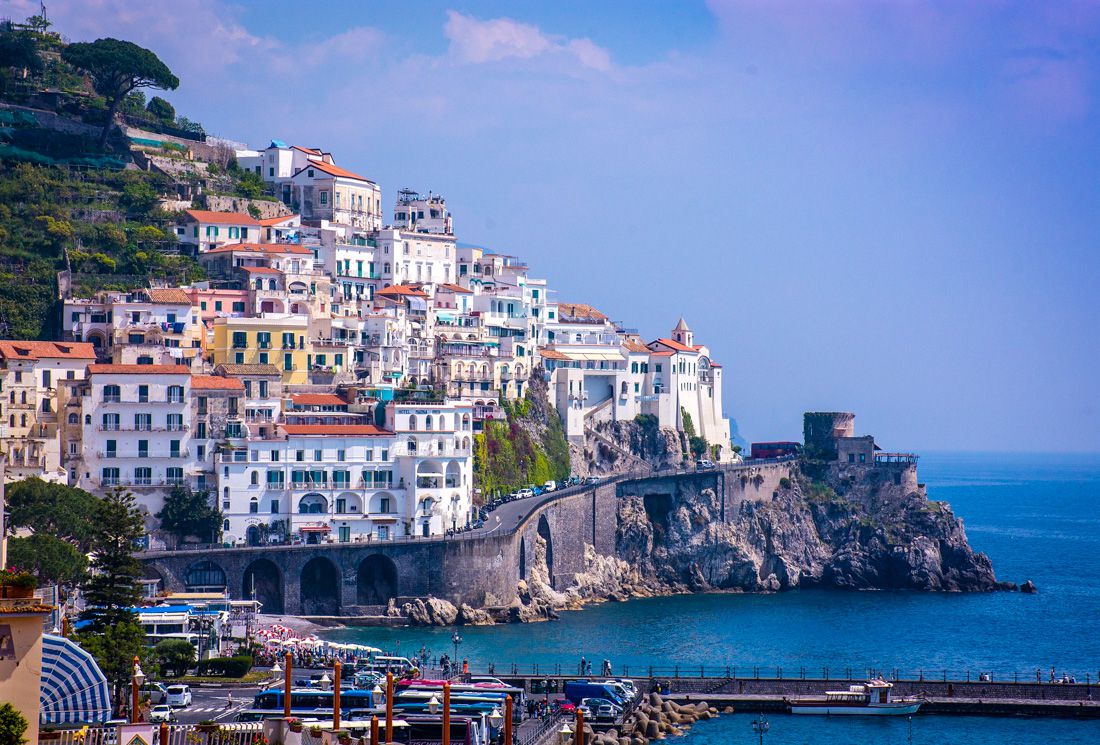 Atrani is the smallest town in southern Italy. It's just a mile from Amalfi and it's easy to bounce between the two towns. They share three beaches between them.

Sant'Agata is a pleasant hill town that sits between the Bay of Naples and the Bay of Salerno. It's set back a bit from the coast, but it has great views of Capri. There are a variety of nearby sights worth visiting including an ancient Greek necropolis and Monastero del Deserto.

Nerano is a fishing village just a short distance from Sant'Agata. It's popular with scuba divers because it's by the Punta Campanella Natural Marine Reserve, but it's also a great destination for foodies, as there are a variety of local specialties available here.

Praiano is a tiny village about halfway between Amalfi and Positano. It's far less touristy than the nearby towns so it offers a nice retreat from the crowds of the more popular destinations. Praiano is known for its sandy beach and impressive views which look out over the Bay of Positano and the island of Capri. Praiano is also where you'll find the trailhead for Sentiero degli Dei.

Conca dei Marini is one of the smallest villages in the area, with just one hundred residents. This town is famous for the Grotta dello Smeraldo (Emerald Grotto) which is a partially-submerged cave that has a unique glowing green light. If you're in town in August, hit up the festival which celebrates the town's famous dessert - the Santa Rosa sfogliatella.

Most visitors make a quick day trip to Ravello but those who linger will enjoy peaceful evenings in a breathtakingly beautiful town. It's a small village that sits on top of a cliff with no actual beach access but it does offer breathtaking views and a touch of luxurious glamour. Ravello is known for its luxurious villas and lush gardens. 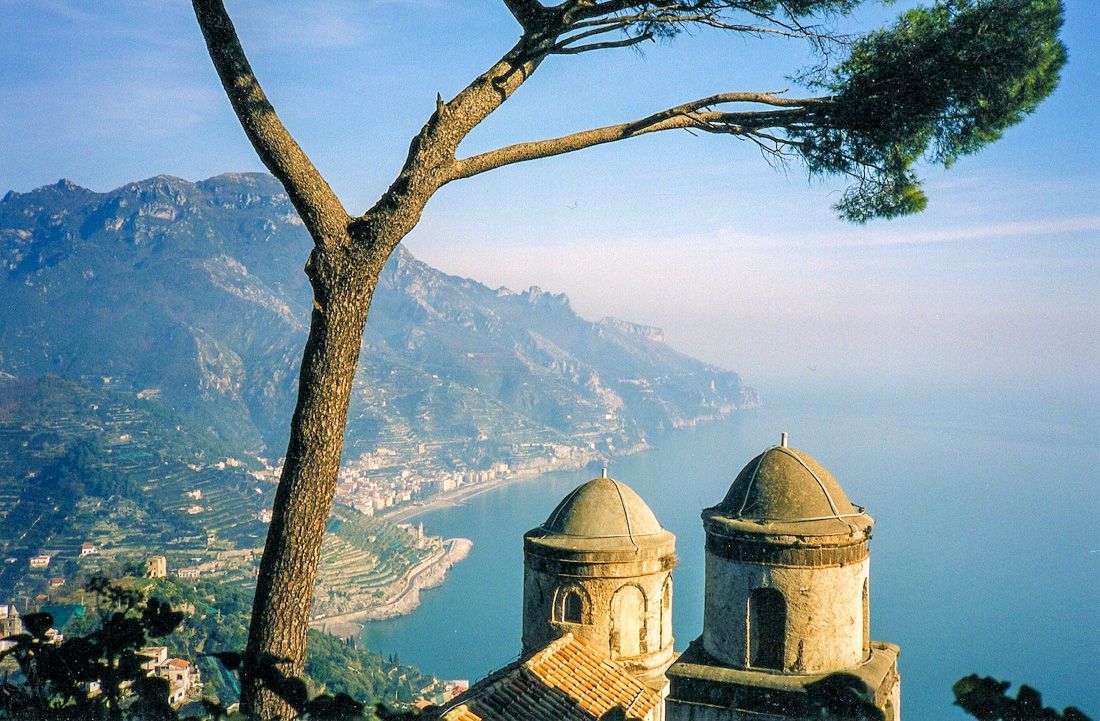 Maiori is a family friendly town that is known for its sandy beaches. It's where you'll find the biggest beach in the region, but there are also a number of other beaches in the surrounding area, many of which require a boat to access. This is one of the more affordable, although less quaint towns along the Amalfi Coast, but for those looking to spend their time lounging in the sun, it's a good option. The area also has fascinating ruins nearby including the Villa Marittima Romana. Also make sure you visit the Grotta di Pandora, which is a beautiful nearby sea cave.

Minori, a small town not far from Maiori, has its claim to fame among foodies. The town is known for its fresh, handmade pasta which dates back to the 16th century and is well known throughout Italy as some of the best. Minori is a pleasant place to visit with far fewer crowds than the more famous towns along the coast. It usually has a cool breeze and there are vineyards and lemon trees that line the terraces making it a refreshing stop on the tour of the Amalfi Coast.

Cetara has the most authentic vibe of the towns along the Amalfi Coast as it is the least dependent on tourism. The town remains a fishing village with an economy that continues to rely of tuna fishermen, giving it an old school atmosphere. Because it's not a tourist hotspot, there are some good deals you can find here for both accommodation and restaurants. Don't visit Cetara without trying the seafood, which has long claimed the title of best in the region. The most famous flavors include the famous anchovy sauce Colatura di Alici, and of course tuna, when it's in season.

Erchie is a small town right beside Cetara that has a large Norman tower and two small beaches.

Vietri sul Mare is just a couple of miles from Salerno. It's famous for its majolica ceramics and there is no shortage of shops that sell the bright earthenware pottery pieces. This is a pleasant town that doesn't have all of the frills of the more famous Amalfi towns. It's slightly more affordable without the tourist crowds, making it a good spot for a low key holiday.

Salerno is a city at the end of the highway that runs along the Amalfi Coast. It's the termination point for the bus route that began in Sorrento and it's a convenient place to base yourself if you're planning to explore the area. It's less touristy than Sorrento and it serves as a major transportation hub for the area. It's easily connected to Rome by train and it has plenty of hotels, restaurants, and entertainment venues. There are several large beaches where you can relax, or you can explore the centro storico, with its historic sights and attractions. 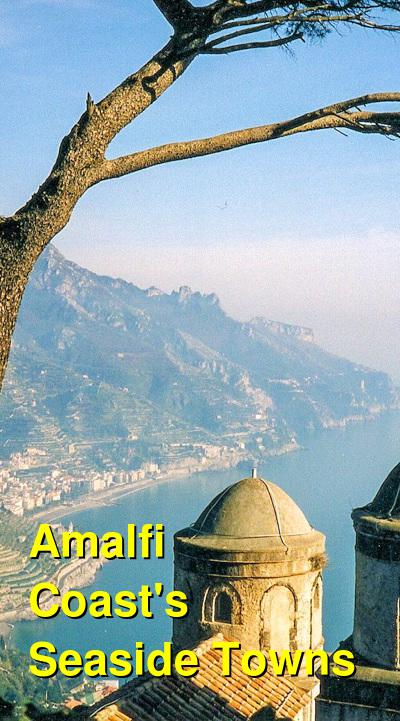