How much does it cost to travel to Kamakura?

How much money will you need for your trip to Kamakura? You should plan to spend around ¥12,718 ($117) per day on your vacation in Kamakura, which is the average daily price based on the expenses of other visitors. Past travelers have spent, on average, ¥2,489 ($23) on meals for one day and ¥1,829 ($17) on local transportation. Also, the average hotel price in Kamakura for a couple is ¥18,286 ($168). So, a trip to Kamakura for two people for one week costs on average ¥178,053 ($1,637). All of these average travel prices have been collected from other travelers to help you plan your own travel budget.

A vacation to Kamakura for one week usually costs around ¥89,026 for one person. So, a trip to Kamakura for two people costs around ¥178,053 for one week. A trip for two weeks for two people costs ¥356,105 in Kamakura. If you're traveling as a family of three or four people, the price person often goes down because kid's tickets are cheaper and hotel rooms can be shared. If you travel slower over a longer period of time then your daily budget will also go down. Two people traveling together for one month in Kamakura can often have a lower daily budget per person than one person traveling alone for one week.


How expensive is Kamakura? How much money do I need for Kamakura?

How much does a trip to Kamakura cost? Is Kamakura expensive? The average Kamakura trip cost is broken down by category here. All of these Kamakura prices are calculated from the budgets of real travelers.

How much do vacation rentals cost in Kamakura? Prices vary by location, date, size of the place, and the level of luxury. See below for options.

How much does it cost to go to Kamakura? Naturally, it depends on the dates. We recommend SkyScanner because they can find the best deals across all airlines.

The price of renting a car in Kamakura will depends on dates, the type of car, the location, and your age. We recommend SkyScanner because they can find the best deals across all car rental companies.

Kamakura On a Budget 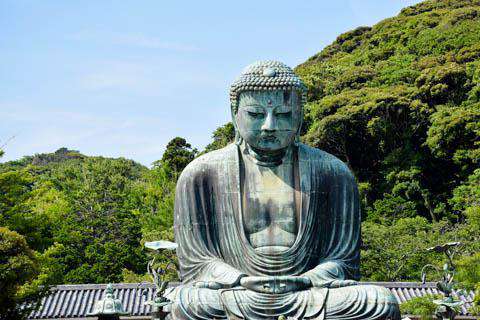 The Buddha at Kamakura, Japan
An old city center of medieval Japan, Kamakura sits today on the seaside just south of Tokyo. Due to its early beginnings, the city is dotted with Buddhist Zen temples and Shinto shrines. It has become a prominent resort town drawing visitors with its many historic landmarks as well as nearby beaches.

The Great Buddha is one of the most popular attractions of the city. Standing in solid bronze outside the Kotokuin Temple in Western Kamakura, it remains the third largest Buddha in Japan at 13.35 meters. Probably cast around 1252, the statue was originally housed in a giant temple hall, but the building was washed away in a tsunami. This site gets very crowded on weekends and holidays. Hasedera and Zeniarai Benten Shrine are located nearby and also worth a visit.

While the Amida Buddha is where many people flock, there are many stunning sights throughout the city, mostly in the form of shrines and temples. The largest Shinto shrine in the city is called Tsurugaoka Hachiman-gu Shrine and is located centrally. This shrine attracts the most visitors, reaching a million on New Year's Day to see the first sunrise of the year. Of all five of Kamakura's Zen temples, numbers one and two are located in the northern part of the city. Kenchoji is the oldest in the city, and one of the oldest in Japan, with a zen garden and a bell that has been designated a national treasure. Engakuji is the second, also with a bell, and a teahouse famous for its tokorotensweet cold noodles. The temples located in Eastern Kamakura are a little more off the beaten path, which can be worth avoiding the tourist crowds. Jomyoji, Sugimotodera, Shakado Kiritoshi, and Hokokuji are all located in this area and can be most easily reached by bus, as there will be a fair amount of climbing once you reach them.

Komachi-dori Street is probably the most well-known street in Kamakura, attracting visitors every day of the week. Lined with cafés, restaurants, and shops, Komachi-dori is always busy, especially with its proximity to the JR Kamakura Station and the main shrine of Kamakura, Tsurugaoka Hachimangu. Wandering along the avenue you might come across little boutiques, Japanese-style sweet shops, stores selling souvenirs, and others selling items unique to the ancient city. Some other oddities include incense stores, a historic restaurant for handmade soba noodles, internationally inspired cuisine, and even a kimono rental shop. Komachi literally means small town, while dori means streetand the place really does have a small town atmosphere of its own.

While visiting the shrines and temples is the most popular activity while in Kamakura, there are several hiking trails that can offer the peace and serenity of nature away from the busy crowds. The Daibutsu hiking course starts a few hundred meters down the road from the Kotokuin Temple. There are a few branching trails that lead to smaller shrines and temples off the regular tourist track.

In the vicinity of the train station, especially along Komachi-dori, there are plenty of restaurants, cafés, and street foods to indulge in. For a sweet treat, one of the local specialties is called murasaki-imo sofuto, or purple potato soft ice cream made from a kind of purple sweet potato found throughout Japan. Kamakura is also famous for its sembei, or rice crackers, which can also be found abundantly on Komachi Street. Other local favorites include bento box lunches, a type of fluffy rice omelet called omuraisu, biscuits, local beers and Japanese sake, sushi, seafood, and all kinds of noodle dishes (though soba, ramen, and buckwheat are the most common).

The two airports closest to Kamakura are Narita International Airport and Haneda Airport.

By train from Narita airport, the fastest but most expensive way to reach Kamakura is to take the Narita Express train in the direction of Yokohama or Ofuna, and then change to the JR Yokosuka line for the run to Kamakura. Regular JR commuter trains also depart from Narita Airport once per hour.

By train from Haneda Airport, take any Keikyu Line Airport Express train bound for Shin-Zushi or Kanazawa-Bunko, and change at Yokohama station for the JR Yokosuka line.

Kamakura is a very popular day trip from Tokyo, so transportation between the two cities is fairly easy.

By backpackguru in Entertainment
The Great Buddha dates back to 1252. It's a very large bronze stature standing over 13 meters tall. It's the most famous attraction in Kamakura, and is therefore very crowded. The best time to visit is early in the morning when you might have a chance to beat the crowds. You can get onto the grounds for 200 yen, and for an additional 20 yen you can go inside. It's not really worth it to go inside because there's nothing there.