How much does it cost to travel to Nikko?

How much money will you need for your trip to Nikko? You should plan to spend around ¥10,065 ($88) per day on your vacation in Nikko, which is the average daily price based on the expenses of other visitors. Past travelers have spent, on average, ¥3,743 ($33) on meals for one day. Also, the average hotel price in Nikko for a couple is ¥11,331 ($99). So, a trip to Nikko for two people for one week costs on average ¥140,916 ($1,234). All of these average travel prices have been collected from other travelers to help you plan your own travel budget.

A vacation to Nikko for one week usually costs around ¥70,458 for one person. So, a trip to Nikko for two people costs around ¥140,916 for one week. A trip for two weeks for two people costs ¥281,831 in Nikko. If you're traveling as a family of three or four people, the price person often goes down because kid's tickets are cheaper and hotel rooms can be shared. If you travel slower over a longer period of time then your daily budget will also go down. Two people traveling together for one month in Nikko can often have a lower daily budget per person than one person traveling alone for one week.


How expensive is Nikko? How much money do I need for Nikko?

How much does a trip to Nikko cost? Is Nikko expensive? The average Nikko trip cost is broken down by category here. All of these Nikko prices are calculated from the budgets of real travelers.

How much do vacation rentals cost in Nikko? Prices vary by location, date, size of the place, and the level of luxury. See below for options.

Nikko On a Budget 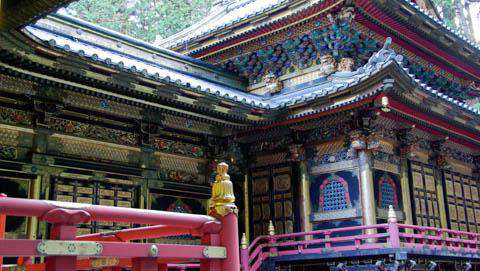 Nikko Rinnoji Temple, Japan (©Yasufumi Nishi/©JNTO)
Nikko is a small Japanese city located in the mountains north of Tokyo. It is well-known for the site of Toshogu, a famed Shinto shrine established in 1617, in memory of Tokugawa Ieyasu who was the founding ruler of the Edo Period. The town is situated just outside of Nikko National Park which offers scenic mountain landscapes, lakes, waterfalls, hot springs, wild monkeys, and hiking trails.

While Togoshu is the most famous temple site, Rinnoji and Futarasan are also very popular as well as numerous smaller ones. Togoshu is the most extravagant of the lot. The Sacred Stable here houses a white horse as well as a carving of the famous three wise monkeys, who "hear no evil, see no evil, speak no evil." Yakushi-do Hall, the Hall of the Medicine Buddha, is known for a dragon painting on the ceiling and a monk who strikes a block whose sharp sound mimics the cry of a dragon. The Yomei-mon Gate is gilded and incredibly ornate with over 400 carvings decorating the structure.

Rinnoji Temple is known for its three large Buddha figures and the peaceful Shoyoen Garden, while Futarasan is the oldest in Nikko and is dedicated to the spirits of Nikko's three holy mountains-Mount Nantai, Mount Nyoho, and Mount Taro. Some of Nikko's other sites include the Shinkyo bridge, Takino-o Shrine just up-mountain with a waterfall, the Kanmangafuchi Abyss with its many protector statues, Tamozawa Imperial Villa Memorial Park built for the Emperor Taisho in 1899, and the Nikko Botanical Garden.

Edo Wonderland is an attraction that, in a way, acts as its own kind of neighborhood. The locstion features a cultural theme park that celebrates the life and culture of the Edo Period. While the atmosphere of the park showcases historic architecture from rural lodgings to government buildings, it also houses several theatres for live outdoor shows, hosts festivals, and has opportunities for dining and shopping. Activities for both adults and children include Ninja workshops, Japanese traditional archery, shuriken throwing, and costume hire. A visit to Edo Wonderland Nikko Edomuro is one of educational history and immersion into a cultural past.

Nikko National Park, right next door to the little city provides great opportunities for seeing wildlife and engaging in outdoor activities. A short walk south of the center of town will get you on a strenuous but rewarding hiking trail to the summit of Mount Nakimushi inside the park. Akagane Shinsui Koen, known as Japan's Grand Canyon, is another feat for the adventurous hiker, located in the far southwestern corner of the Nikko territory. Inside the park, special low-pollution hybrid buses run from a depot at Akanuma, near the Yukawa River and the Ryuzu Falls, to the nature preserve at Senjugahama, on the western shores of Lake Chuzenji.

If you prefer your own private nature getaway, Woodsman's Village is a place in the hills of Nikko where you can rent a log cabin to stay in for however long you like. There is also an option to rent a barbecue grill as well.

A specialty that can be found pretty much everywhere in Nikko is called yuba, which is the 'skin' that forms on top when making tofu. Most commonly it is served with soba, buckwheat noodles in a soup broth. Yuba is also the most typical omiyage (edible souvenir to share at home) to take from Nikko. One of the most popular restaurants for tourists to stop at is Hippari Dako. Most crowds stop here to indulge in yakitori, a type of Japanese chicken kabob, and noodles. Gurumans Wagyu is a popular steak restaurant though reservations are required, while Shiawaseya Hakuun is a great place to stop for a sweet treat and endless green tea. You can find anmitsu here, a local dessert made with fruit, bean jam, and molasses. If you're looking for some fresh fruit and vegetables away from the tourist trap prices, there is a farmers market in Nikko just around the corner from the Tobu Nikko Station-just turn right out of the station, right at the traffic lights, and continue down just before the bridge over the river.

By air, Haneda Airport in Tokyo is probably the best bet, as you will need to take a train from the Tobu-Asakusa station in Tokyo in order to reach Nikko.

The fastest and most convenient way to access Nikko is on the private Tobu Nikko Line from Tokyo's Tobu-Asakusa station. Tobu Railway also offers three convenient passes for Nikko and Kinugawa hot spring area. The "All Nikko Pass" allows unlimited buses and train access in the Nikko and Kinugawa area with some discounts for nearby attractions, the "2 Day Nikko Pass" covers a round-trip to Nikko and Kinugawa and unlimited buses for world heritage area plus discounts for the Kinugawa Theme Park, and the "Kinugawa Themepark Pass" covers round-trip train fare and bus pass and admission to Tobu World Square or Edo Wonderland.

You could also travel by the JR Rail but it is more expensive and takes longer.