How much does it cost to travel to Nova Scotia?

How much money will you need for your trip to Nova Scotia? You should plan to spend around CA$121 ($90) per day on your vacation in Nova Scotia, which is the average daily price based on the expenses of other visitors. Past travelers have spent, on average, CA$35 ($26) on meals for one day and CA$19 ($14) on local transportation. Also, the average hotel price in Nova Scotia for a couple is CA$133 ($99). So, a trip to Nova Scotia for two people for one week costs on average CA$1,695 ($1,260). All of these average travel prices have been collected from other travelers to help you plan your own travel budget.

A vacation to Nova Scotia for one week usually costs around CA$848 for one person. So, a trip to Nova Scotia for two people costs around CA$1,695 for one week. A trip for two weeks for two people costs CA$3,390 in Nova Scotia. If you're traveling as a family of three or four people, the price person often goes down because kid's tickets are cheaper and hotel rooms can be shared. If you travel slower over a longer period of time then your daily budget will also go down. Two people traveling together for one month in Nova Scotia can often have a lower daily budget per person than one person traveling alone for one week.

How much does a trip to Nova Scotia cost? Is Nova Scotia expensive? The average Nova Scotia trip cost is broken down by category here. All of these Nova Scotia prices are calculated from the budgets of real travelers.

Looking for a hotel in Nova Scotia? Prices vary by location, date, season, and the level of luxury. See below for options.

How much does it cost to go to Nova Scotia? Naturally, it depends on the dates. We recommend Kayak because they can find the best deals across all airlines.

The price of renting a car in Nova Scotia will depends on dates, the type of car, the location, and your age. We recommend Kayak because they can find the best deals across all car rental companies.

Nova Scotia On a Budget 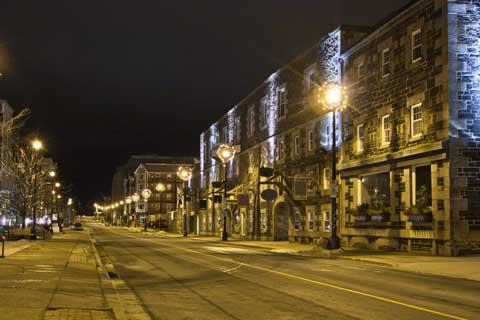 Old Town Halifax, Nova Scotia, Canada
As one of the original four provinces of Canada, Nova Scotia became part of Canada in 1867. With a population of over 900,000 people, 44% of them live in the capital city of Nova Scotia. This region is truly diverse with people of countless ethnic backgrounds calling Nova Scotia home, but the biggest influences come from the early Scottish settlers. It's undoubtedly there even if it's been mixed with the native Mi'kmaq culture and those of other immigrant groups.

When planning your trip, remember that anytime outside of June to October will be extremely frigid, and many businesses will likely be closed.

If it's animals you love, Nova Scotia has plenty of critters for you to visit. The Tobeatic Wilderness and Southwest Nova Biosphere Reserve is the largest protected wilderness area in Atlantic Canada. Spanning over five counties in southwestern Nova Scotia, the Tobeatic is home to nine rivers and over 120 lakes. Pack a lunch and enjoy an afternoon of canoeing and animal watching. Keep your eyes opened for the chance to see moose, black bears, flying squirrels, bald eagles and more.

Another option is to visit Brier Island in the Bay of Fundy. This unique spot is full of marine life including whales, migrating birds and seals. It is not unheard of to spot rare and endangered plants in this area, as well, as this region is mostly untouched by man.

If human history is more your style, take a trip to the Louisburg National Historic Site. Spend the day letting the costumed tour guides tell you stories of how in 1744 this area was built to protect French interests and served as a base for cod fishing.

The Cape Breton Highlands National Park, and the surrounding area on Cape Breton island are not to be missed. This rustic and scenic area is full of dramatic shorelines, small quaint towns, and cozy bed and breakfasts.

There are several bike tours available along popular areas like Cape Breton's Cabot Trail and the Peggy's Cove Lighthouse route. When riding past, be sure to admire the charming lighthouse sat on granite boulders as the waves crash below. Today, the lighthouse serves as a post office but there is tourist information and a restaurant inside.

A scenic drive can be made by heading south from Halifax towards Peggy's Cove and beyond, all the way down to the southern end of the island. Depending on how much time you have available, follow the coastal roads through all of the small towns along the shore. Each one offers historical buildings, restaurants, bed and breakfasts, small harbors full of fishing boats, and the occasional beach. Highlights include Peggy's Cove, Lunenburg, and the LaHave Islands.

When you're done with that, consider a quaint shopping trip in Mahone Bay. Known as the "sunniest town on the coast," Mahone Bay is full of colorful buildings from the 19th century full of local crafts for you to browse and buy.

If it's a little more adventure you're after, take a trip to Maitland for a day of rafting the tidal bore in an inflatable dingy. If you time it out to the right moon phase, you could be in for the most thrilling ride of your life.

Given Nova Scotia's interesting mix of cultures, there are dishes of almost every influence. Some dishes can not be missed, though. The donair, based on a Turkish dish, is a spiced beef with tomatoes and onions doused in a sweet white sauce and wrapped up in a warm pita. Many will compare it to a gyro, but the sweet sauce is what makes the donair special, and they are available in most diners and pizza places in Nova Scotia.

If you're packing snacks for your day at Tobeatic, grab a little dulse. Made from local seaweed, this snack is a treat special to this area.

To travel around Nova Scotia it is recommended you have your own car. The highway system here is divided into three sections. Highways 1 to 99 are the original main roads of the region. They connect everything within the province. These are usually two lane roads that run through villages and towns. Highways 101 to 199 are expressways. These provide the faster route, but much like I-95 in the US, these roads don't provide much scenery. These roads typically run parallel to highways 1 to 99, but are four lanes and less appealing to cyclists. Highways 201 to 399 are minor highways through the province.

There are more local paved roads, and scenic trails marked by specific signs. Nova Scotia's layout is pretty simple, but foreigners should always use a map or GPS. Be cautious of conditions in the winter, especially on smaller roads.