How much does it cost to travel to Alberta?

How much money will you need for your trip to Alberta? You should plan to spend around CA$124 ($93) per day on your vacation in Alberta, which is the average daily price based on the expenses of other visitors. Past travelers have spent, on average, CA$31 ($23) on meals for one day and CA$21 ($15) on local transportation. Also, the average hotel price in Alberta for a couple is CA$144 ($108). So, a trip to Alberta for two people for one week costs on average CA$1,738 ($1,297). All of these average travel prices have been collected from other travelers to help you plan your own travel budget.

A vacation to Alberta for one week usually costs around CA$869 for one person. So, a trip to Alberta for two people costs around CA$1,738 for one week. A trip for two weeks for two people costs CA$3,477 in Alberta. If you're traveling as a family of three or four people, the price person often goes down because kid's tickets are cheaper and hotel rooms can be shared. If you travel slower over a longer period of time then your daily budget will also go down. Two people traveling together for one month in Alberta can often have a lower daily budget per person than one person traveling alone for one week.


How expensive is Alberta? How much money do I need for Alberta?

How much does a trip to Alberta cost? Is Alberta expensive? The average Alberta trip cost is broken down by category here. All of these Alberta prices are calculated from the budgets of real travelers.

Looking for a hotel in Alberta? Prices vary by location, date, season, and the level of luxury. See below for options.

How much does it cost to go to Alberta? Naturally, it depends on the dates. We recommend Kayak because they can find the best deals across all airlines.

The price of renting a car in Alberta will depends on dates, the type of car, the location, and your age. We recommend Kayak because they can find the best deals across all car rental companies.

Tips and Handouts Budget in Alberta

Alberta On a Budget 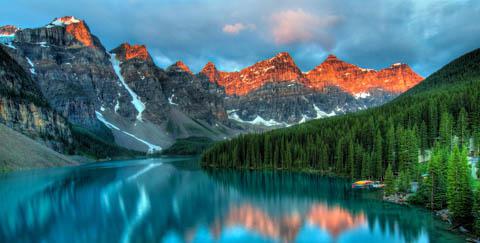 Banff National Park
If you ever wanted to visit a place where all the beauty of nature is centrally located, you will want to make a trip to Alberta, Canada. With part of the Canadian Rockies, the prairies and the wilderness of forests, Alberta has something for everyone. As the home to Canada's oil industry, this is also the richest province in the country.

One of the most breathtaking sights you can see in Alberta is the drive from Calgary west towards British Columbia. The Rockies spike dramatically and quickly from the earth. The routes through Banff, Jasper or Glacier National Park are also quite stunning.

If you plan to take a stop, consider Kananaskis Country. This section of the Alberta Rockies region includes Peter Lougheed Provincial Park with a ski resort and golf course. Book a tee time early, as these are the busiest courses in North America. If it's winter, enjoy the cross-country skiing and skate trails. If it's summer, hop on an ATV and cruise around.

Another stunning stop is Lake Louise in the middle of Banff National Park. Surrounded by snow-capped mountains with a large glacier at the far end, this isolated area is perfect for a luxurious resort. Be sure to explore the vibrantly colored glacial lakes like Lake Louise, Moraine Lake, Bow Lake and Peyto Lake. Another must-see is Victoria Glacier.

Alberta is split into several regions. The Alberta Badlands are located in the southeast of Alberta, and is home to valleys and plains full of fossils. The Alberta Rockies region includes the beauty of Banff, Lake Louise and Jasper. The Calgary region contains Alberta's largest city, Calgary, and a rapidly growing population. Central Alberta is the most rural region of the province with rolling hills, prairie and forests. Eastern Alberta is mostly forests and farms while Edmonton Capital contains the capital city of Edmonton. The Peace River Valley has breathtaking forests with small towns, and Southern Alberta is the windy region with several wind farms and regular farms.

Between all the ski resorts in Alberta â Jasper National Park, Sunshine Village, Lake Louise and Norquay â you will find slopes for every level of experience. The hardcore skier will find new challenges to intrigue them, while the novice can enjoy the leisurely runs through the greens.

For the experienced hiker, the Rockies can be an interesting challenge. With a few lakes for boating, jet skiing and other water sports, you will get the entire nature experience in a landlocked province.

For a truly unique experience, visit the Dinosaur Provincial Park just a couple of hours southeast of Calgary. Admission for general camping is free, but to see the restricted areas, you have to pay for a guide. The park is full of trails and hoodoos for climbing, and the scenery is amazing. A large percentage of the world's dinosaur bones have been found in this park, hence the name, and it is not unusual to find small bone fragments on the ground. You'll have to put them back for others to find, however, because taking them with you us against the rules. Keep your eye out for several common dangers of this park â rattlesnakes, scorpions and black widow spiders live here, as well.

Given that many parts of Alberta are so isolated, there is a surprising variety in the restaurants to choose from â especially in the major cities. From simple diners to fine dining, Alberta is ready to offer travelers whatever meal they're looking for. The region is particularly known for its beef, and the steak is considered the regional dish for the province.

Greyhound Canada offers services along almost all the major destinations in Alberta. Keep in mind, Greyhound does so-called "milk runs" where they stop at almost every location to drop odd and pick up passengers.

Given that Alberta is so large, however, car travel is basically a must. Most towns have grown vertically instead of horizontally so unless you plan on staying in Calgary or Edmonton, where walking is an option, you're going to want a car. Road regulations are the same as Canada as a whole. Keep your eyes open, as critters love to dart into the road.