A Travel Price Comparison for Colorado Breckenridge vs. Boulder for Vacations, Tours, and Honeymoons

Should you visit Breckenridge or Boulder?

Should I visit Breckenridge or Boulder? This is a common question asked by many travelers. By figuring out which city is more affordable, you'll understand where you can get more bang for your buck. So, let's dive into the data, which all comes from actual travelers.

Boulder is located on the edge of the Rocky Mountains in the state of Colorado. As home to the University of Colorado at Boulder, it's a college town with a liberal vibe and progressive values. In recent years, Boulder's economy has received a boost from the tech industry, which has grown rapidly in the area.

Boulder is also a great city to visit. It's surrounded by a beautiful mountain setting and there are countless outdoor sporting activities that you can enjoy. One unique aspect of Boulder is its role as home to many serious athletes who come here to train in the area's top facilities and programs.

Boulder's climate is similar to most of Colorado. It's a dry city with plenty of sunshine. Winters can vary dramatically from mild to incredibly cold and snowfall averages 44 inches a season. Summers are warm and dry with temperatures climbing above 90 degrees Fahrenheit during the warmest months.

Which city is cheaper, Boulder or Breckenridge?

The average daily cost (per person) in Breckenridge is $160, while the average daily cost in Boulder is $153. These costs include accommodation (assuming double occupancy, so the traveler is sharing the room), food, transportation, and entertainment. While every person is different, these costs are an average of past travelers in each city. Below is a breakdown of travel costs for Breckenridge and Boulder in more detail.

For a normal double-occupancy room in Boulder, $164 is the average cost for a hotel room. Also in Boulder, the typical price for a place to stay for one person is $82, such as in a hostel.

In Boulder travelers spend around $43 a day on food. You can save money by choosing casual restaurants or food stalls, or you can spend plenty more by dining in nicer restaurants at every meal.

Here are some examples of typical meal expenses from previous travelers to Boulder:

Is it cheaper to fly into Breckenridge or Boulder?

Prices for flights to both Boulder and Breckenridge change regularly based on dates and travel demand. We suggest you find the best prices for your next trip on Kayak, because you can compare the cost of flights across multiple airlines for your prefered dates.

Sightseeing expenses in Boulder, including the cost of admission tickets for day tours, museums, and attractions, usually cost an average of $26 per day, per person.

Tours and Activities in Boulder

Also, here are some specific examples of entertainment, tickets, and activities for Boulder.

Alcoholic beverages can often be a significant portion of a traveler's budget, and the costs can vary greatly from person to person. In Boulder, the average amount that a visitor spends on alcoholic beverages per day is $22.

When comparing the travel costs between Breckenridge and Boulder, we can see that Breckenridge is more expensive. However, the two cities are actually relatively comparable in price, as the difference is somewhat minimal. Generally, this means that you could travel with generally the same travel style and level of luxury in each place. Since both cities are in North America, it's no surprise that their costs are relatively close, as many destinations here have somewhat similar travel prices overall. 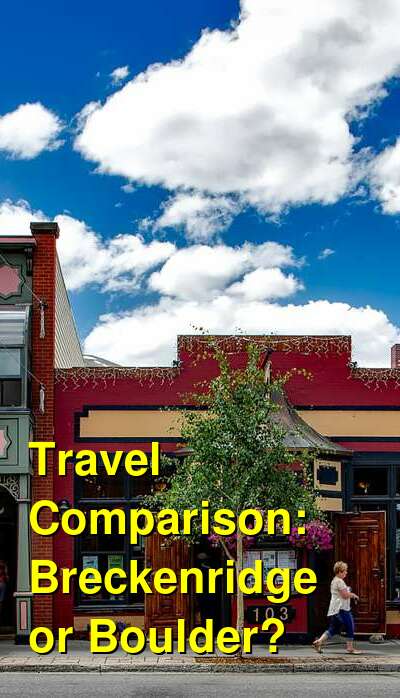