A Travel Price Comparison for United States of America California vs. Alaska for Vacations, Tours, and Honeymoons

Should you visit California or Alaska?

Which city should you visit? Read on to compare the prices of travel for California and Alaska. We’ll break down costs for accommodation, food, transportation and more to help you learn more about these two destinations. Then, you can figure out if either of these two places are accessible based on your travel budget. So, let's dig into it.

California is the most populous state in the U.S. and is known for a variety of attractions such as Hollywood, warm beaches, the San Francisco bay area, Redwood trees, national parks, and stunning mountain vistas. With a variety of locations and activities to offer, California has become one of the premier travel destinations in the world.

Which city is cheaper, Alaska or California?

The average daily cost (per person) in California is $198, while the average daily cost in Alaska is $195. These costs include accommodation (assuming double occupancy, so the traveler is sharing the room), food, transportation, and entertainment. While every person is different, these costs are an average of past travelers in each city. Below is a breakdown of travel costs for California and Alaska in more detail.

For a normal double-occupancy room in California, $184 is the average cost for a hotel room. Also in California, the typical price for a place to stay for one person is $92, such as in a hostel.

On average, meal and food prices in California cost around $37 per person, per day. While this price can vary widely by location, the type of restaurant, and the amount of food ordered, a typical meal often costs around $15.

For California, here are some samples of tours and activities related to meals and dining experiences:


Hired Cars and Shuttles in California

Also for California, here are a few examples of actual transportation services:

Is it cheaper to fly into California or Alaska?

Prices for flights to both Alaska and California change regularly based on dates and travel demand. We suggest you find the best prices for your next trip on Kayak, because you can compare the cost of flights across multiple airlines for your prefered dates.

Sightseeing expenses in California, including the cost of admission tickets for day tours, museums, and attractions, usually cost an average of $49 per day, per person.


Tours and Activities in California

For California, here are a few prices for actual activities, tours, and tickets provided by various companies:


Sample the Local Flavors in California

Also in California, these are the prices for nightlife and alcohol related activities from various tour providers:

When comparing the travel costs between California and Alaska, we can see that California is more expensive. However, the two cities are actually relatively comparable in price, as the difference is somewhat minimal. Generally, this means that you could travel with generally the same travel style and level of luxury in each place. Since both cities are in North America, it's no surprise that their costs are relatively close, as many destinations here have somewhat similar travel prices overall. 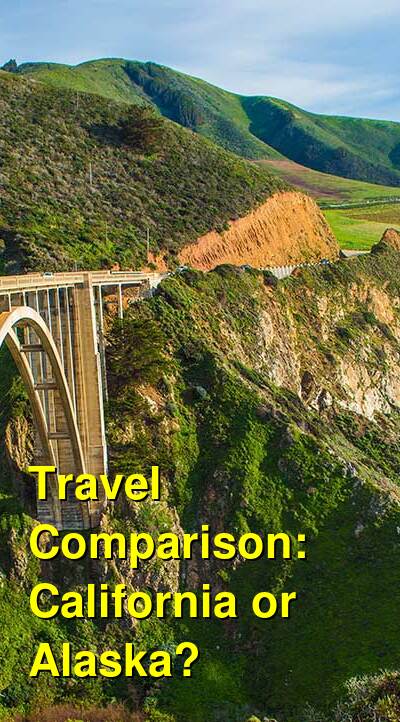