How much does it cost to travel to San Diego?

How much money will you need for your trip to San Diego? You should plan to spend around $161 per day on your vacation in San Diego, which is the average daily price based on the expenses of other visitors. Past travelers have spent, on average, $36 on meals for one day and $19 on local transportation. Also, the average hotel price in San Diego for a couple is $183. So, a trip to San Diego for two people for one week costs on average $2,256. All of these average travel prices have been collected from other travelers to help you plan your own travel budget.

A vacation to San Diego for one week usually costs around $1,128 for one person. So, a trip to San Diego for two people costs around $2,256 for one week. A trip for two weeks for two people costs $4,511 in San Diego. If you're traveling as a family of three or four people, the price person often goes down because kid's tickets are cheaper and hotel rooms can be shared. If you travel slower over a longer period of time then your daily budget will also go down. Two people traveling together for one month in San Diego can often have a lower daily budget per person than one person traveling alone for one week.


How expensive is San Diego? How much money do I need for San Diego?

How much does a trip to San Diego cost? Is San Diego expensive? The average San Diego trip cost is broken down by category here. All of these San Diego prices are calculated from the budgets of real travelers.

Looking for a hotel in San Diego? Prices vary by location, date, season, and the level of luxury. See below for options.

How much does it cost to go to San Diego? Naturally, it depends on the dates. We recommend Kayak because they can find the best deals across all airlines.

The price of renting a car in San Diego will depends on dates, the type of car, the location, and your age. We recommend Kayak because they can find the best deals across all car rental companies.

What did other people spend on Food in San Diego?

Typical prices for Food in San Diego are listed below. These actual costs are from real travelers and can give you an idea of the prices in San Diego, but your costs will vary based on your travel style.

What did other people spend on Entertainment in San Diego?

Typical prices for Entertainment in San Diego are listed below. These actual costs are from real travelers and can give you an idea of the prices in San Diego, but your costs will vary based on your travel style.

San Diego On a Budget 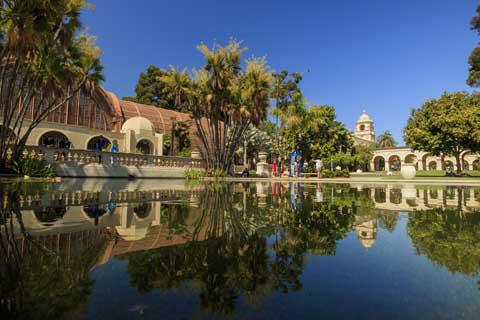 Balboa Park, San Diego
For many visitors and locals alike, San Diego is a paradise. Located in southern California, not far from Los Angeles, it has the perfect climate, wonderful beaches, and a culturally rich environment. It's surrounded by beautiful landscape and has a strong focus on wildlife conservation and eco-friendly living. Home to about 1.3 million residents, it is California's second largest city. It also has many universities, a large tech industry, and a thriving economy. Despite its size, many people perceive San Diego as a slower, more relaxed city with a pleasant vibe away from the chaos of a large city.

San Diego's climate is ideal almost any time of the year. Coastal temperatures hover around 75 degrees Fahrenheit throughout the year and humidity stays low. As you head inland away from the coast, temperatures can change dramatically. During the summer the temperatures can rise noticeably and during the winter the inland areas are much cooler, particularly at night. May and June experience the most clouds and overcast weather. September is the hottest month and September and October have the highest risk for wildfires.

San Diego is a great city to explore with many interesting sights and a wonderful atmosphere. Top sights in the city include Balboa Park, Sea World, La Jolla, the San Diego Zoo, Point Loma Lighthouse, and Mission San Diego de Alcala, among others. In La Jolla you can visit the Birch Aquarium or see the Harbor seals at Children's Cove. Popular museums around town include the San Diego Maritime Museum and the USS Midway Museum. Many visitors also like to make the trip to Coronado to see the Hotel Del Coronado. This hotel was built in the 1800s and sits right on the beach. There are many shops and beautiful beaches that you can enjoy.

San Diego has many different neighborhoods, each with its own vibe and atmosphere. San Diego's downtown area has a vibrant nightlife and business district. Balboa Park is where you'll find the San Diego Zoo and many museums. It also has some interesting residential areas. The Old Town area was the site of the first Spanish settlement in California and Point Loma is a great area to explore the coastline and look for sea life. Also consider making a trip to the upscale area of La Jolla, which is quite beautiful and has a nice aquarium worth visiting.

San Diego is a great place for outdoor activities, cultural events, and excellent shopping. While you're in town you can relax on the beach, go whale watching, try your hand at surfing, or enjoy some boating or sailing. The weather is almost guaranteed to be pleasant and nice for any of the best things to do in San Diego. If you're an adventurous spirit, you can try scuba diving, hang gliding, or rock climbing. Hiking or biking opportunities are also plentiful. If you've had enough of the outdoors, then beer tasting in San Diego is also a popular past time.

Of course, this is Southern California, and the beach is always a popular place to spend your days. Check out this guide to beach resorts in San Diego for some ideas.

Or head out of town to visit nearby destinations that are all within easy reach. La Jolla, Coronado, or Carlsbad are just a few places on the list of day trips from San Diego that are plenty of fun.

The public transit system in San Diego is lacking, and you would definitely benefit from having access to a car. There is a trolley system that predominately serves tourists, but the schedule can be infrequent and inconvenient. The trolley system has the blue, green and orange lines. The Blue Line runs from the US and Mexico border to Old Town via Chula Vista, National City and Downtown. The Green Line connects Old Town east to Santee, passing through Mission Valley and SDSU. The Orange Line connects the cities of El Cajon and La Mesa with Downtown. There are also city buses, but they do not cover large areas of the county and their service is also infrequent and inconvenient. Biking is another alternative if you don't have access to a car, but you will be limited in the neighborhoods you will be able to visit, as some are spread out or far away.