A Travel Comparison for Vacations, Honeymoons, and Tours Greece vs. Croatia

Should you visit Greece or Croatia?

Greece has long been a popular travel destination in Europe, and Croatia increasingly is becoming one of the more popular countries to visit in the region. Each country has a lot to offer visitors, from beautiful coastlines to fascinating histories. Greece's capital, Athens, is a great place to spend time, particularly if you're a history buff. The Greek Isles are world famous, but so is Dubrovnik, the coastal town and top tourist destination in Croatia.

In general, Greece is more expensive than Croatia. Greece's popularity with tourists and its use of the euro mean that costs are comparable to other Western European countries. Croatia remains more affordable, but with its growing popularity comes an increasing price tag, particularly in towns like Dubrovnik where accommodation in a prime location in the city's old town can come at a premium. Still, costs in Croatia are relatively low when compared to Greece.

Which country is cheaper, Croatia or Greece?

Should I visit Greece or Croatia? This is a popular question for many travelers. By figuring out which country is more expensive, you'll understand where you'll get more bang for your buck. A week in Croatia can cost you about €534 (per person), while a week in Greece may cost you around €861. These differences become even more noticable if you plan to spend a longer time in the country. 10 days, two weeks, or even one month of travel to Croatia or Greece can really add to your travel budget.

When comparing food in Greece vs. Croatia they are not just different in cuisine, but also in price. Meal and restaurant costs in Greece (€32) are often cheaper than Croatia (€23).


How much are flights to Greece and Croatia?


Find a Hostel in Greece or Croatia

Things to do in Athens, GreeceBest Hostels for Budget Travellers in SantoriniThe Best Party Hostels in AthensBest Hostels in Rhodes, Greece for Backpackers, Couples, & GroupsFood and Wine Tours of Mykonos, Greece, on a BudgetCheap Tours and Activities in Rhodes (Segway Tours, Scuba Diving, Kayaking)

When is the best time to visit Greece and Croatia? 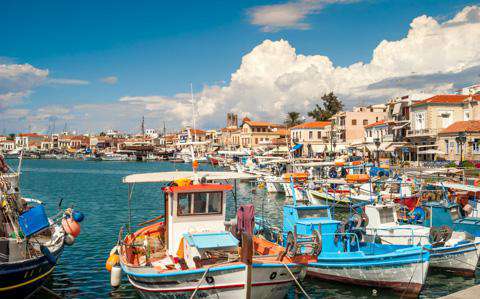 Aegina, Greece
Like much of Mediterranean Europe, both Croatia and Greece are best visited during the late spring/early summer and fall months. If you time your travels well, you can avoid the peak season travel costs and the crowds that flood the area during the summer months. For example, check out these great places in Greece to visit in October. Temperatures are also cooler during these times making the experience more enjoyable.

During the winter months Greece can be a bit difficult to visit because there are far less ferries traveling between islands and many restaurants and hotels close for the season. Also take note that hotels can fill up quickly during the week of Easter, particularly in and around Athens. Hotels and restaurants in Croatia also tend to close their doors for the winter months so it is best to avoid these times.

Why is Greece more expensive than Croatia?

Greece has long been an established tourist destination in Europe. It's popularity and use of the euro make it comparable in price to other European countries. Most visitors also use ferries to reach the Greek Isles, which can be expensive. Accommodation prices, while less than some countries in Europe, is still expensive when compared to Croatia.

Croatia has become a popular tourist destination, but it is only in recent years that the popularity has begun to effect prices. Greece remains a popular destination for cruise ships as well, which drives up the prices of restaurants and shopping. While cruises do visit the Croatian coast, it is not to the same extent as those in Greece and the influence on prices is still less.

What are the most expensive and cheapest cities and regions in Greece and Croatia? 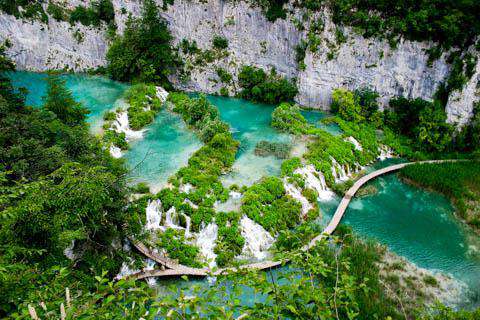 Plitvice National Park, Croatia
In Greece, popular island destinations like Mykonos and Santorini are usually more expensive than Athens. Hotels and hostels are pricier, as are restaurants. Cruises more frequently visit these islands which can drive up the price of food and shopping. While cruise passengers do visit Athens, the city is quite large, so their impact on pricing is still minimal. Traveling to and from the Greek Isles can also be expensive, increasing the entire price of your trip.

Croatia has several popular destinations, with the most famous being Dubrovnik. Dubrovnik is one of the more expensive places to visit in the country in part because of the limited number of places to stay within the Old Town. Dubrovnik has also grown into a popular port for cruise ships, which has impacted the prices in the area. Other major cities in Croatia are popular with visitors, but not as popular, so prices are a little lower.

How you can save money when visiting Greece and Croatia?

Travel during the shoulder seasons of fall and spring. Prices in both Greece and Croatia are heavily impacted by the season, so choose your timing wisely if you want to get the most bang for you buck. Prices inevitably climb during the peak summer months, temperatures can become uncomfortably hot, and crowds are at their peak.
Slow down. Particularly in Greece, transportation costs can be expensive, so plan to visit less places for longer periods of time.
Spend time walking around the city or town you're in. Take advantage of the area's natural beauty and free activities, so you don't spend too much money on entertainment costs.
Stay with a local. It's possible in some places to rent a room in someone's home. This can be a fun and interesting way to experience the country so research your options in advance.
Plan a picnic. Restaurants can be pricey so grab some local food at a market or grocery store and find a good place to sit with a view. This is a great way to enjoy local food without spending a fortune.