A Travel Price Comparison for Families, Couples, and Backpackers Lulea vs. Savonlinna for Vacations, Tours, and Honeymoons

Should you visit Lulea or Savonlinna?

Trying to figure out where to travel next? This travel comparison between Lulea and Savonlinna can help. It includes a travel cost comparison in addition to other factors. For many travelers, the cost of a destination is a primary consideration when choosing where to go.

Where Should I go: Lulea or Savonlinna?

Savonlinna is a town and a municipality of 35,504 inhabitants in the southeast of Finland, in the heart of the Saimaa lake region. The Finnish name of the town means "Castle of Savonia" and the Swedish name means "New Castle". The city was founded in 1639, based on Olavinlinna castle. Savonlinna is a historical borderland where the cultures and traditions of East and West meet. As the oldest town in Eastern Finland, Savonlinna is famous for its world class opera festival in the medieval castle surrounded by blue waters of Lake Saimaa. With its 100 year old steamships and unparalleled selection of experiences and activities, Savonlinna is a the real gem of Lakeland Finland.

Which city is cheaper, Savonlinna or Lulea?

The average daily cost (per person) in Lulea is $88, while the average daily cost in Savonlinna is $91. These costs include accommodation (assuming double occupancy, so the traveler is sharing the room), food, transportation, and entertainment. While every person is different, these costs are an average of past travelers in each city. What follows is a categorical breakdown of travel costs for Lulea and Savonlinna in more detail.

Compare Hotels in Lulea and Savonlinna

Looking for a hotel in Lulea or Savonlinna? Prices vary by location, date, season, and the level of luxury. See below for options and compare which is best for your budget and travel style.

Is it cheaper to fly into Lulea or Savonlinna?

Prices for flights to both Savonlinna and Lulea change regularly based on dates and travel demand. We suggest you find the best prices for your next trip on Kayak, because you can compare the cost of flights across multiple airlines for your prefered dates.

Tours and Activities in Savonlinna

Some specific costs of activities, tours, and entrance tickets for Savonlinna are as follows:

When comparing the travel costs between Lulea and Savonlinna, we can see that Savonlinna is more expensive. However, the two cities are actually relatively comparable in price, as the difference is somewhat minimal. Generally, this means that you could travel with generally the same travel style and level of luxury in each place. Since both cities are in Europe, it's no surprise that their costs are relatively close, as many destinations here have somewhat similar travel prices overall.


When is the best time to visit Lulea or Savonlinna?

Should I visit Lulea or Savonlinna in the Summer?

The summer attracts plenty of travelers to both Lulea and Savonlinna.

In July, Lulea usually receives less rain than Savonlinna. Lulea gets 50 mm (2 in) of rain, while Savonlinna receives 56 mm (2.2 in) of rain each month for the summer.

Should I visit Lulea or Savonlinna in the Autumn?

The autumn brings many poeple to Lulea as well as Savonlinna.

Savonlinna can be very cold during autumn. Lulea can get quite cold in the autumn. In the autumn, Lulea is much colder than Savonlinna. Typically, the autumn temperatures in Lulea in October are around 2°C (36°F), and Savonlinna is about 4°C (40°F).

In the autumn, Lulea often gets more sunshine than Savonlinna. Lulea gets 82 hours of sunny skies this time of year, while Savonlinna receives 72 hours of full sun.

Should I visit Lulea or Savonlinna in the Winter?

Both Savonlinna and Lulea are popular destinations to visit in the winter with plenty of activities.

Lulea usually receives less sunshine than Savonlinna during winter. Lulea gets 19 hours of sunny skies, while Savonlinna receives 34 hours of full sun in the winter.

In January, Lulea usually receives more rain than Savonlinna. Lulea gets 44 mm (1.7 in) of rain, while Savonlinna receives 40 mm (1.6 in) of rain each month for the winter.

Should I visit Lulea or Savonlinna in the Spring?

Both Savonlinna and Lulea during the spring are popular places to visit.

In the spring, Lulea often gets around the same amount of sunshine as Savonlinna. Lulea gets 194 hours of sunny skies this time of year, while Savonlinna receives 180 hours of full sun.

Lulea usually gets less rain in April than Savonlinna. Lulea gets 29 mm (1.1 in) of rain, while Savonlinna receives 32 mm (1.3 in) of rain this time of the year.

Typical Weather for Savonlinna and Lulea 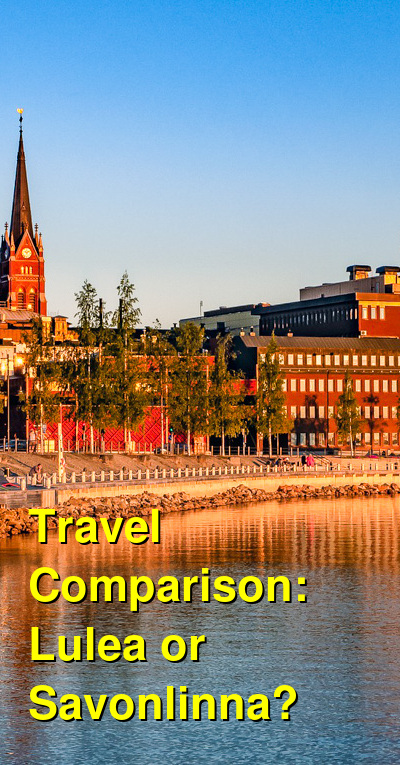