A Travel Price Comparison for Families, Couples, and Backpackers Lulea vs. Tampere for Vacations, Tours, and Honeymoons

Should you visit Lulea or Tampere?

Trying to figure out where to travel next? This travel cost comparison between Lulea and Tampere can help. For many travelers, the cost of a destination is a primary consideration when choosing where to go.

Tampere is a city in southern Finland. It sits between Nasijarvi Lake and Pyhajarvi Lake, with the Tammerkoski rapids in between. It is one of the larger Finnish cities, with more than 200,000 inhabitants, but Tampere has managed to keep the small town feel. The city center is compact in size, and the atmosphere is friendly and casual. The city is located on a scenic spot on a narrow isthmus. The Tammerkoski rapids and their riverbanks form the backdrop for the old industrial buildings, and ridges formed thousands of years ago by ancient seas and retreating ice offer fantastic views over the two lakes. Original architecture and innovative urban development blend together to please both viewers and users of the built environment. Enjoy the surrounding lakes on peaceful rowboat trips or on cruises on larger vessels, or concentrate on the urban sights from a sightseeing bus. Regenerated industrial buildings now house quirky museums, enticing shops, pubs, cinemas and cafes. Tampere has a down-to-earth vitality that makes it a favorite for many visitors.

Which city is cheaper, Tampere or Lulea?

The average daily cost (per person) in Lulea is $101, while the average daily cost in Tampere is $135. These costs include accommodation (assuming double occupancy, so the traveler is sharing the room), food, transportation, and entertainment. While every person is different, these costs are an average of past travelers in each city. Below is a breakdown of travel costs for Lulea and Tampere in more detail.

Double occupancy rooms typically run around $146 in Tampere For nicer amenities and a premiere location, you can expect to pay a bit more.

The price of a meal in Lulea can vary widely. However, the average price for food per day is $34 per person, and a typical meal will cost around $14 based on the spending of previous visitors. Less expensive dining options can be found by eating street food or at fast food restaurants.

While meal prices in Tampere can vary, the average travelers spends about $30 per day on food. Based on the spending habits of previous travelers, when dining out, an average meal in Tampere should cost around $12 per person. Breakfast prices are usually a little cheaper than lunch or dinner. The price of food in sit-down restaurants in Tampere is often higher than fast food prices or street food prices.

While taxis and private drivers typically cost much more than public transportation, people usually spend around $20 per day to get around in Lulea.

Hired Cars and Shuttles in Tampere

Also for Tampere, here are a few examples of actual transportation services:

Is it cheaper to fly into Lulea or Tampere?

Prices for flights to both Tampere and Lulea change regularly based on dates and travel demand. We suggest you find the best prices for your next trip on Kayak, because you can compare the cost of flights across multiple airlines for your prefered dates.

Activities, things to do, and other forms of entertainment usually cost around $15 per person, per day in Lulea. This cost includes the price of admission tickets to attractions and museums as well as daily tours.

Sightseeing expenses in Tampere, including the cost of admission tickets for day tours, museums, and attractions, usually cost an average of $22 per day, per person.

Tours and Activities in Tampere

Also, here are some specific examples of entertainment, tickets, and activities for Tampere.

While the amount that someone spends on alcohol while visiting Lulea may vary from person to person, on average a person spends $17 per day on alcoholic beverages.

Alcoholic beverages can often be a significant portion of a traveler's budget, and the costs can vary greatly from person to person. In Tampere, the average amount that a visitor spends on alcoholic beverages per day is $9.52.


When we compare the travel costs of actual travelers between Lulea and Tampere, we can see that Tampere is more expensive. And not only is Lulea much less expensive, but it is actually a significantly cheaper destination. So, traveling to Lulea would let you spend less money overall. Or, you could decide to spend more money in Lulea and be able to afford a more luxurious travel style by staying in nicer hotels, eating at more expensive restaurants, taking tours, and experiencing more activities. The same level of travel in Tampere would naturally cost you much more money, so you would probably want to keep your budget a little tighter in Tampere than you might in Lulea. 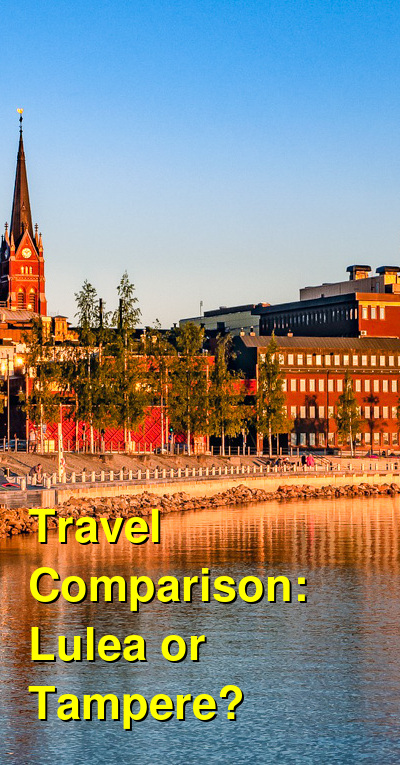